2nd Battle of the Marne

Between the 9th and 13th June 1918 General Ludendorff launched his Operation Gneisenau against the French in the area of Soissons and Compiègne. The French under Général Fayolle effectively operated a system of defence in depth (despite great misgivings about the system) and although they were forced back, the line held, putting an end to the Germans’ advance.

This offensive had not only cost Ludendorff dearly in men it had also cost time, something that he had precious little of, for as each day passed, more and more Americans arrived on the Continent. Since the opening of the Spring Offensive the Germans had lost about 700,000 soldiers killed.

Hesitating as to where to launch his last gamble for victory, Ludendorff eventually decided upon the area between Château-Thierry and Verdun — attacking in a pincer movement around Reims. For his part, the Allied Supreme Commander, Général Foch, had come to the same conclusion and took the risk of depleting his forces elsewhere in readiness to not only hold the Germans at Reims but also to prepare for his own counter-offensive which Général Mangin would launch on 18th July.

That the French did not launch an attack on the 14th July — Bastille Day — increased German hopes that their own plans had not been discovered. That night their troops began to move forward to their start positions.

However, the timings of the German bombardment (set for 0010 hours) had been discovered by the French who opened fire ten minutes beforehand. Although this caught the massing Germans by surprise, many went into battle unperturbed by this change in events.

Opposite the German 10th and 36th Divisions, between Château-Thierry and Mézy-Moulins to its east, was the 3rd US Infantry Division under Major General Dickman. In the town itself were the 4th Infantry and then to their right, the 7th, 30th and finally the 38th Infantry at Fossoy and Mézy-Moulins. Immediately to the right of the 38th Infantry was the French 131e Régiment d’Infanterie (part of the 125e DI) in the sharp bend of the river at Varennes, opposite Jaulgonne.

Although the French knew the Germans were about to attack, this helped little when the bombardment began smashing all communications well in the rear of the river. Gas shells mixed with high explosive rained on junctions, artillery batteries, anything that the Germans perceived as a headquarters. Then the shells began falling on the front line positions along the Marne. These posts were supposed to hold the enemy whilst a secondary defensive line just behind them was intended to contain them if the river was breached. Many of them were simply obliterated. 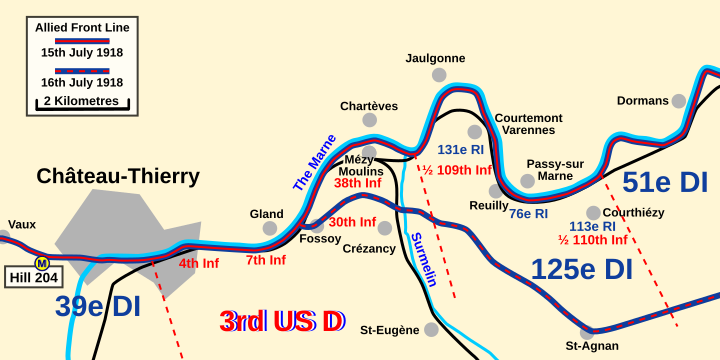 By 0445 hours the smoke screen on the river had cleared and the French could see Germans rafting across it along the eastern section of the loop in the river. Those machine-gunners still alive opened fire sinking a number of rafts but nevertheless the Germans managed to get ashore. The CO of the III/131e RI defending the top of the loop was killed almost immediately and the entire battalion was swiftly surrounded. A message sent at 0510 hours stated that the battalion was holding its own, it was never heard from again.

Just behind it, Capitaine Verzy and his 6e Compagnie were hanging on to Courtemont-Varennes but he was killed as well by Germans who had managed to infiltrate from the south at Reuilly.

By now all contact with the 3rd US Division had been lost and the battle raged on the heights of the spur as the Germans made their way up the valley and railway line (in the American zone of defence). By 1000 hours though, things had begun to stabilise. The biggest danger to the 125e DI was from further east where the Germans had managed to create a bridgehead and were menacing the Division’s right flank. The 113e RI seems to have collapsed and it was only the steadfastness of the Americans that helped steady the line.

It needs to be pointed out that the Germans had pushed a number of Italian Divisions back, a number of kilometres off to the east and this was having a ripple effect down towards Château-Thierry as units had to constantly guard their right flank.

On the spur the II/131e RI had been completely cut off by midday but was still holding its position three hours later and with the news that the 3rd US Division had held firm on its left the French could now concern themselves with their right flank which was being forced to fall back to the second line in conformation with those units to its east.

The four companies of Americans, who were held on that line fought a major part in the battle and were favourably mentioned by Général Diébold of the 125e DI.

Four American Companies belonging to two regiments of the 55th US Infantry Brigade attached to the Division occupied sectors of the front line where they performed extremely well. Some groups, surrounded by the enemy succeeded in forcing a passage back to our lines.

The general commanding the 125e DI congratulates these units, who have sealed by blood our brotherhood in arms which will assure victory.

This was their baptism of fire, thrust into battle during a major German offensive. Those of the 109th Infantry on the spur gained the title of Iron Men from General Pershing for their stubbornness in holding their positions. Some accounts suggest that the Americans were abandoned by the French but in the initial fighting it is more probable that the French simply ceased to exist.

Rock of the Marne 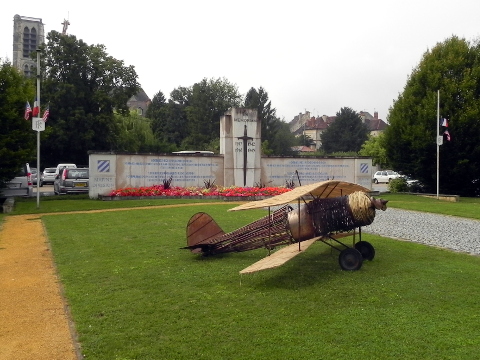 3rd US Division Memorial at Château-Thierry

On the Frenchmen’s left the 38th US Infantry gained the title Rock of the Marne for their stand. Covering the area of Mézy-Moulins and the valley of the Surmelin River they had prepared positions covering the eventuality of a retirement by the French.

They were badly hit by the German bombardment along the length of the railway line along the valley. Of the three attempts to get across the river, only one succeeded — opposite the valley. Company G had already lost one of its platoons exterminated (according to an official report) and a second was also wiped out trying to hold back the Germans.

…the French infantry withdrew at about 4 a. m., after probable severe loss. This withdrawal exposed my right flank to hostile attack on a front of over four kilometres.

It was not just the 38th Infantry’s right flank that was in jeopardy because the 30th Infantry on their left had also given way leaving that flank slightly open as well. That was secured and eyes turned again to the eastern flank.

The loss of the front line companies is about 50 per cent and the losses of the entire regiment about 25 per cent killed and wounded. The 30th Infantry has captured about 200 Germans including one major, two captains and some other officers and the 38th Infantry has also captured prisoners.

The entire line of the 38th Infantry is intact. The small posts of the 30th Infantry were driven back ; our support line from Crézancy to the ravine to the left is intact and we have 2 or 3 companies in these woods to the front : I do not know how many men we have here because the shell fire has been so severe…

…We have been exposed to mustard gas, chlorine and chocolate gas and if a good many of our men don’t get their clothes off we are going to have casualties from mustard gas. It is absolutely impossible for the men to get food, for all except what was in cans is spoiled from the gas…

How the Boche crossed the river we don’t know. Some came across in boats. It will be absolutely impossible for them to maintain any communication with the other bank as there are 8 airplanes ranging for the artillery. Our artillery on 3 or 4 occasions has fired beautifully ; they have dropped a barrage down within 75 or 100 yards of the bank of the river. The Boche that are here, are here. I don’t think any counter attack is necessary ; when the artillery gets in action and ranges on this, there is only one thing for these men to do, that is to come in and surrender.

A report from 3rd US Division states :

Taking now the sector occupied by the 38th Infantry extending across the Surmelin Valley, we find the situation about as follows: The front line occupied by this regiment followed the R. R. [Rail Road] extending north to a point on the river west of Varennes ; the remainder of this regiment was distributed in depth up the valley to St-Eugene, in the villages and slopes east and west. The forward companies of this regiment which had remained in their positions were so demoralized by the preparatory fire of the Germans that the latter after crossing advanced regardless of their presence.

Ultimately, regardless of the cause and effect, whilst the Germans had penetrated a few kilometres to the east and taken the tip of the spur, the line held. Some ground had been given to the east but the pincer movement around Reims had failed.

Within days the French Tenth Army would counter-attack from the Forest of Retz near Soissons. It would take a further four months of fighting but from here on in it would be the Allies who would advance.