Château-Thierry is a town 40 kilometres south of Soissons. From the town centre take the D 1003 in the direction of Meaux and the Monument Americain. At the top of the hill the road sweeps around to the left and you will see the entrance to the American Memorial between two stone pylons.

The entrance can arrive faster than you are expecting it to, as it is right on the bend. 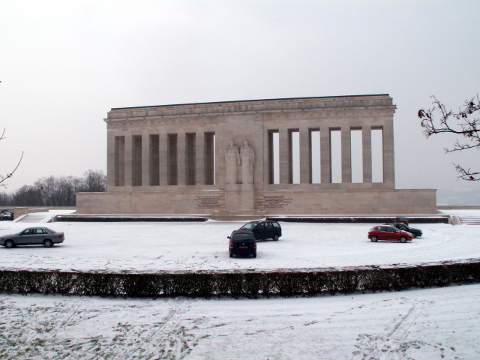 In June 1918, the 2nd and 3rd United States Infantry Divisions took part in heavy fighting in the town and surrounding area during the Second Battle of the Marne (one of the last offensives of the German Spring Offensive which had begun in March).

Many of those who fell are buried in the Aisne-Marne American Cemetery at Belleau — though the majority of casualties would be repatriated after the war.

Although the town had been held, the German line to the west towards the village of Belleau included the hill overlooking the town.

A counter-attack was planned for the 6th June (the same day that the USMC would commence its assault on Belleau Wood). That day the III/53e RIC, two companies from the I/52e RIC and a battalion of Americans launched their initial attack on the hill.

This attack was launched from the southern side via the steep slope and woods. If you are looking at the monument from the town then it was attacked from its left.

The struggle to gain and then maintain a foothold on the slopes of this all important position overlooking the town’s defences continued for days. As battalions rotated in and out, the fighting became extremely bitter, as fusillades were exchanged at point blank and the artillery of both sides pounded the hill.

At the end of June the 10e DIC were relieved by the 39e DI who also inherited the planned attack on the summit and the village of Vaux on its left flank (In conjunction with the 9th US Infantry Regiment — 2nd US Infantry Division).

The 153e RI used all three of its battalions but found it impossible in the face of the German machine guns which covered all approaches to the wood to maintain their gains (the American monument sits out in the open in front of the wood through which the French were trying to fight their way through). On the left the 9th US Infantry Regiment took Vaux and reached the railway line just beyond it with minimal casualties.

On the 7th July a second attempt was made by the 153e RI this time with detachments of Americans and help from the 146e RI. Once again the left flank could make little to no advance but the right (III/153e RI) succeeded in getting into the Bois de Courteau and held on despite incessant fire directed against them.

The 146e RI now took over the line and would help the Americans repulse the final German offensive on 15th July. Although the Germans could make no progress themselves a tentative to take the hill by the French on the 20th July (whilst the French counter-offensive was in progress around Soissons) was beaten off once again. But, the following morning the French and Americans found that the Americans had evacuated Château-Thierry. After so much bloodshed and bitter fighting Hill 204 was occupied. 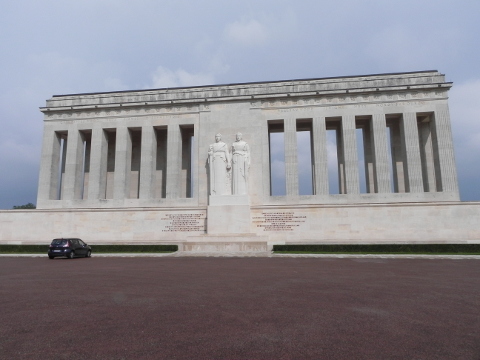 The memorial commemorates the achievements of United States forces that fought in the region during the First World War. Two stone pylons mark the entrance to the memorial from the D 1003 which runs from Château-Thierry to Paris (about 80 km to the west). 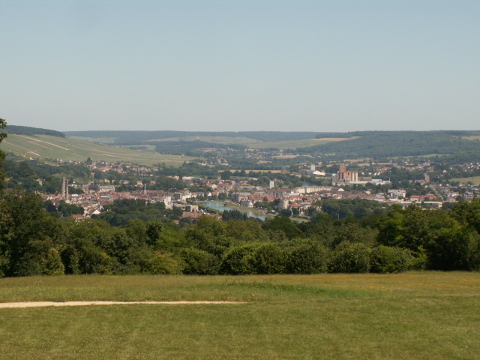 Looking out across Château-Thierry

The monument consists of a double colonnade rising above a long terrace, as designed by Franco-American architect Paul Philippe Cret.

Cret had emigrated to the USA in 1903 but happened to be in France when war broke out making him liable (as a Frenchman) for military service.

Following the war he was sought out by the American Battle Monuments Commission with a view to creating a number of monumental works on the Western Front. 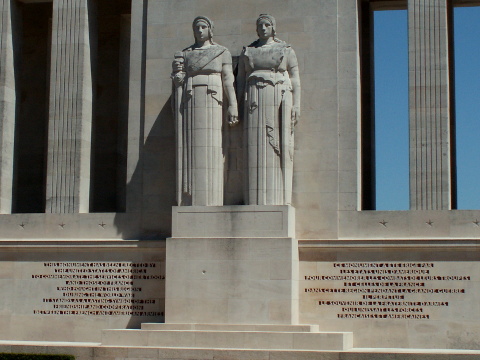 On its west façade, facing the car park, are sculptured figures representing the United States and France.

You could be forgiven for thinking that as it is America with the Sword and France the shield that this might reflect the opinion that the Americans thought that they were doing all the fighting. However, I would point out that the sculptor was the French artist Alfred Bottiau (who served during the war).

It was Bottiau’s liaison with Cret that enabled him to realise a number of important memorial works including the sculptures on the chapel at the Aisne-Marne American Cemetery at Belleau (nine kilometres away taking the side road all but opposite the Hill 204 entrance).

“This monument has been erected by the United States of America to commemorate the services of her troops and those of France who fought in this region during the World War. It stands as a lasting symbol of the friendship and cooperation between the French and American Armies.” 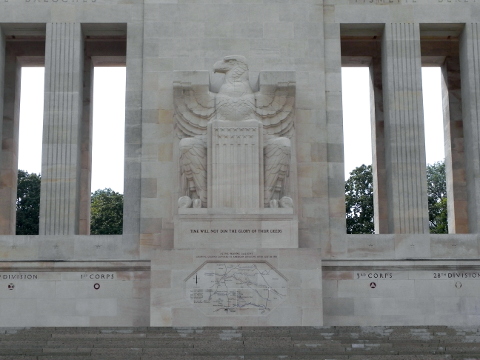 On the eastern façade a huge eagle looks out over the town in the valley below. Beneath it is the inscription :

Time will not dim the glory of their deeds

Underneath is a map showing American military operations that took place in the region and an orientation table pointing out the significant battle sites. 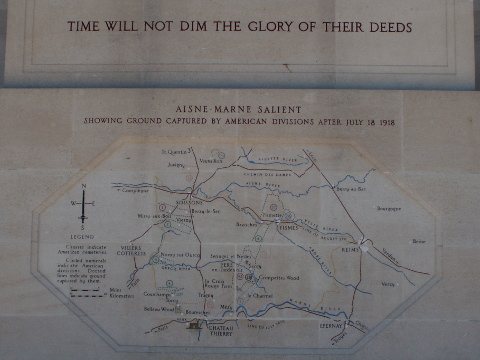 Along the wall you will also see the emblems of the American Divisions : take particular note of that of the 93rd US Infantry Division — an Adrian Helmet. The 93rd were an all negro/coloured Division which never fought as an entity. Put very simplistically : the American High Command did not want armed negros at the front. Negros were there to provide labour. However on a number of occasions the Division was dispersed to fight alongside French units. Although they wore US uniforms they used the French Casque Adrian which gave them their nickname Blue Hats and their emblem.