Huit Rues is situated just to the south-east of Hazebrouck between Morbecque and Wallon-Cappel along the D 138 Road. From Wallon-Cappel turn off at the large roundabout and follow the signs for Morbecque. Coming from the other direction Huit Rues is sign posted in Morbecque but it is a street tucked between houses and easily missed.

There is a large parking area with a descriptive panel explaining the site and its history.

The Fieseler Fi 103, is better known as the V-1, its description Vergeltungswaffe is German for vengeance weapon.

My father who witnessed them during the blitz describes it as a flying blow-lamp and he is not so far out. The fuselage was constructed of sheet steel, the wings were often simple plywood and it carried an 850 kg warhead. The jet engine pulsed 50 times per second giving it a characteristic buzzing sound which the Londoners soon nicknamed the Buzz Bomb.

One of the problems with the rocket was the fact that it could not take off under its own power and so needed a piston driven launch pad to hurl it out in the right direction with enough velocity to allow the on-board engine to take over and keep it in flight. Militarily it was probably the first Cruise Missile.

The guidance system was very simple, based around a gyrocompass, stabilisers and a fixed amount of fuel. The catapult sent the V-1 off in the required general direction and the gyrocompass then took over, the stabilisers kept it flying level and when the fuel ran out, it dropped.

People soon began to realise that so long as the buzzing continued the rocket was flying overhead and there was no danger, but as soon as the engine stopped the bomb was activated.

To help conceal its purpose the V-1 was officially named as an anti-aircraft apparatus (FZG) and the regiment of the Luftwaffe created to use them was designated Flakregiment 155 (W) (Flak being the abbreviation for an anti-aircraft gun and thus the reason for allied pilots having to: Take Flak)

The V-1 rockets were built by Volkswagen at their factory near Hamburg.

One of the ways of limiting the destruction of London was by falsely reporting the strikes. By stating that the outer suburbs on the far side had been bombed instead of the centre, the launch teams reduced the fuel, causing short falls. This may well have limited the damage to the capital but the bombs still fell on somebody.

The control centre was based at Creil near Paris but moving it to the Citadel at Doullens, where the telephone exchange was already based, had been considered.

The German military hierarchy had differing ideas as to how to launch their new weapon. Huge bunkers (which would draw attention to themselves) or smaller, less obvious sites. In the end Göring made the decision to build 4 large bunkers (Wasserwerken — waterworks) and 96 smaller bases. 64 of these bases were to be constructed by October 1943 whilst the remainder would be held in reserve.

The Tödt Organisation used 40,000 workers in northern France to build the bases. Nobody was allowed to work in their own village, so although a base was built at for example Ligescourt near the Crécy battlefield of 1346, drafted workers from the village would have been sent elsewhere.

Even though they were adapted to the local situation the bases followed a very similar design allowing missiles to be brought in, stocked, prepared and launched on a conveyor belt system.

The base needed to be on flat land and small woods were considered to be the ideal location.

The linking roadways between the bunkers were created using concrete slabs and the buildings for the most part were constructed with breeze blocks, which dispensed with the need to provide a casing for poured concrete. 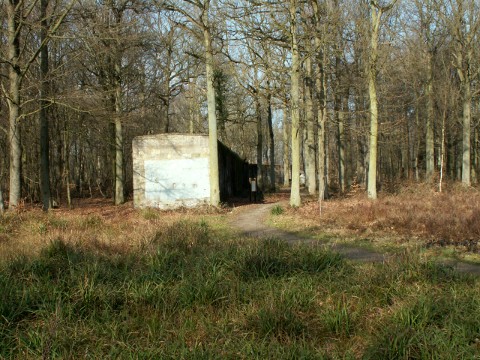 Following intelligence reports concerning a new construction at Bois Carré near Yvrench (Just outside Crécy) No 170 Squadron RAF flew a reconnaissance sortie E/463 on 3rd November 1943. The observers noted a number of bunkers which they described as : ski-shaped buildings 240-270 feet long (80-90 metres).

There are usually three such buildings and at 80 metres long by over 4 metres high and wide they have a curved end for blast protection. From the air they look like skis lying on their sides.

The design is so distinctive that the RAF very quickly identified over 70 other such sites and Operation Crossbow was commenced in order to bomb them. 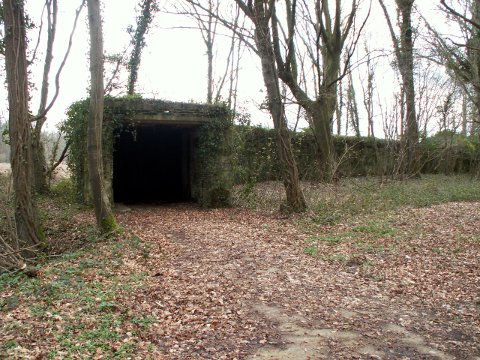 These missions were named : No-Ball Missions, and the very first was launched against the installations at Ligescourt by B-26 bombers of the USAF on 5th December 1943.

In effect then, none of these heavily fortified bases ever got to be used because they were just too obvious and ended up drawing the RAF and allied bombers onto them. This eventually became an advantage to the Germans who ensured that the French workers were occupied in repairing the sites.

Observation and spies concluded that continual bombardment was necessary and the ski sites became bomber bait.

My elderly neighbours would say that the RAF became so tunnel-visioned about Ligescourt that they missed the light launch site at Wadicourt only a few kilometres away.

To get round the problem of the high visibility of the larger complexes the German command ordered the creation of lighter launch sites with fewer bunkers and a basic ramp. These were quicker to build and much more easily repaired. The Germans only used slave labour and German engineers to carry out the work which allowed for greater secrecy.

These modified sites were much more discreet in their construction and were only identified for what they were days before the V-1 blitz on London began on 13th June 1944.

There were certain similarities between the bases through necessity of preparation. There were bunkers to store the chemicals for the catapult (hydrogen peroxide and potassium permanganate) and an anti-magnetic building constructed without any iron in it at all.

This was the last building that the rocket passed through before launch and it was here that the magnetic compass would be set. The entire flight depended on the compass working properly and so any possible interference had to be avoided at this stage.

The one building that seems to have been augmented was the firing bunker which now offered the firing crew a better field of vision and better protection.

The ski shaped storage bunkers and the launch ramp blast walls though had gone. The launch ramp itself was prepared elsewhere and was now simply bolted to a pre-prepared platform. 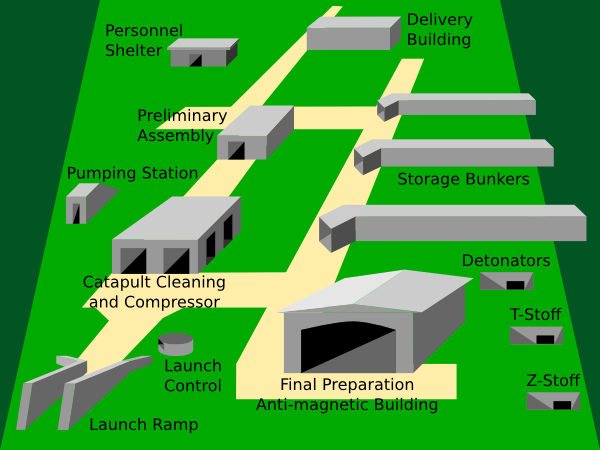 Remembering that the Ski Bases were never actually used, the following is an indication of what was supposed to have happened. The lighter V-1 bases followed a very similar routine.

The photos have been put together from two sites, Huit Rues itself and Ligescourt, as the buildings there are in a better state of repair. 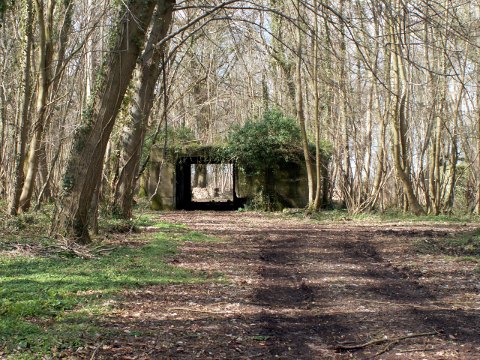 The missiles would be delivered to the site and pass through the preliminary construction building. This contained offices along one side of its length and a long workshop along the other. In this workshop the nose cone was fitted and the engine tested. The wings would not be fitted until later in order to conserve space in the Ski bunkers which were used to stock the missiles prior to launch.

Each base had three of these 80 metre bunkers which were destined to hold the compliment of 27 missiles (A day’s launching). It was these oddly shaped buildings at Yvrench that gave the sites their nickname. 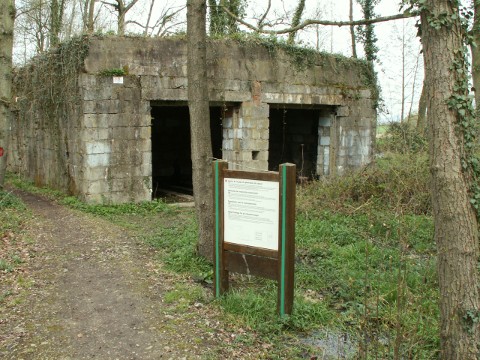 In order to prepare each V-1 for launch it was brought down to a second workshop which contained compressors for filling the air spheres that powered the guidance system. It was in this workshop that the launch trolley and its steam catapult were thoroughly rinsed off after every launch, to eliminate any trace of the chemicals that powered the catapult.

Immediately next door to this building was a soft water pumping station. Washing the equipment down was such an essential part of the launch process that it was all important to use distilled water — the natural water in the north tends to be extremely hard due to the chalk. 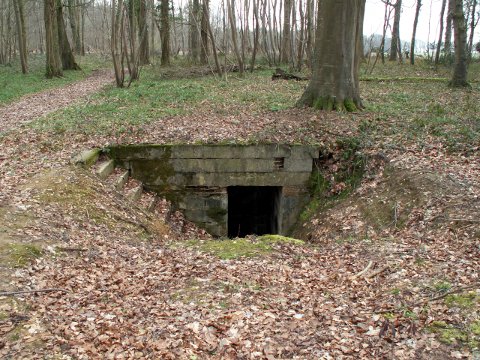 Underground bunkers stocked the two chemicals used to power the catapult. One (Z-Stoff) contained the potassium permanganate and the other (T-Stoff) the hydrogen peroxide. It was realised that under no circumstances should the two chemicals come into contact with each other prior to the launch. 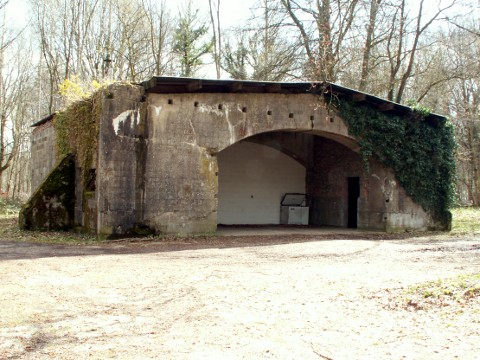 In the anti-magnetic building or __Richthaus__the V-1 had its wings and detonators fitted and the guidance system calibrated. It was essential for the calibration that there was no ferrous metal nearby (the door hinges were sometimes made of wood) and that the building was exactly aligned with the launch ramp situated about 50 metres away. 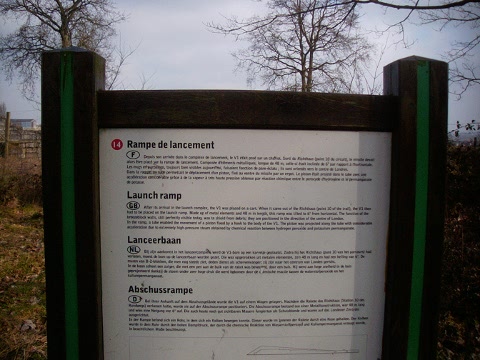 The launch pads were extremely well anchored to ensure that the ramp didn’t move on launching the missile. I have read that the vibration at launch was so violent that the firing party in their bunker had to wear protective equipment to stop them being shaken to death. 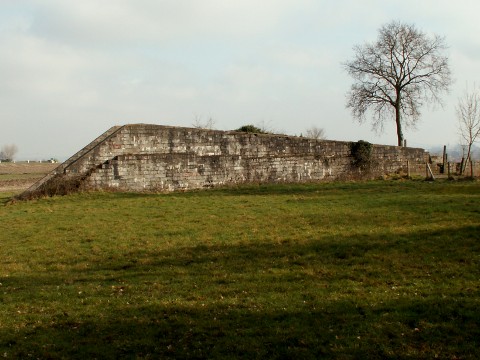 The launch base protection walls at Huit Rues

One of the big differences between the Huit Rues site and a modified light base was the fact that at the original sites the launch ramp was protected by two huge walls almost a metre thick. These walls mimicked the angle of the ramp and opened out at the base into a funnel shape. 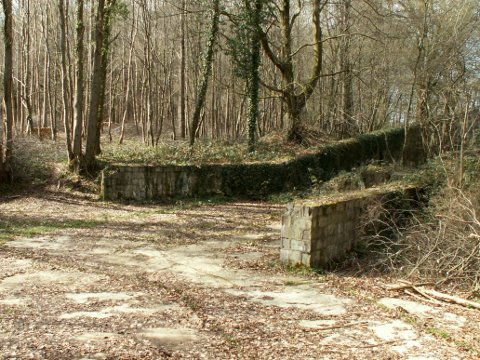 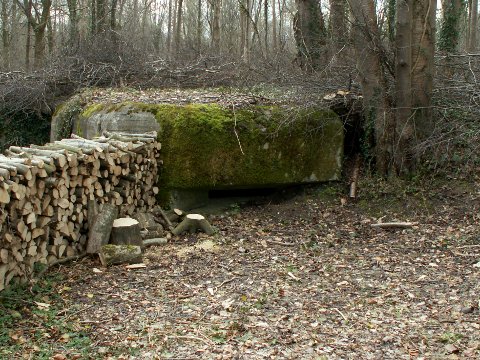 A small bunker was placed in the left-hand sector of this funnel and it was from here that the launch would be effected. In the original bases there is only the one observation porthole, but later versions used on the lighter sites were given better observation and were thus the only part of the set up that was ameliorated. 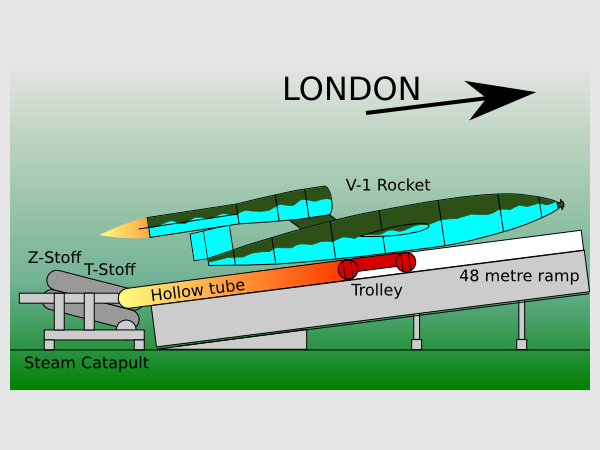 In general the angle of launch was about six degrees and it would be true to say, in the vast majority of cases, that if you follow the walls’ direction you are looking towards London, about 200 kilometres away !

The V-1 was placed on a launch trolley which connected to a piston inside a tube running the length of the 48 metre ramp. The steam catapult was then fitted to the base of this tube. The firing sequence combined the two reactive chemicals within the catapult which instantly produced great quantities of steam at about 600 Celsius. The piston was retained by a simple pin and as soon as the pressure was great enough it broke the pin and the trolley was propelled up the ramp at 400 kph catapulting the V-1 into the air. From there on the on-board motor would keep the missile in flight all the way to its destination.

The firing crew would collect the trolley and clean up the launch ramp. As potassium permanganate is exceedingly corrosive everybody had to wear protective clothing.