A little bit of history

The first fortifications were raised in 1150 by Count Baudouin IV of Hainaut, known as Baudouin the Builder and the new town became a favourite home of the Counts of Hainaut. Over the next few generations Hainaut would marry into the House of Flanders before later passing into that of Burgundy whose Duke Charles the Bold (Charles le Téméraire) spent most of his early life here.

Charles was constantly at war and was killed at Nancy in 1477 fighting forces of the French Louis XI. Louis immediately set out to reclaim the Burgundian lands to the north of France arriving in front of Le Quesnoy (which had never been French). The town resisted for some weeks but eventually fell. Up until then the walls had changed little in shape and the fortifications were those of a mediaeval castle with a tower and crenelated walls.

Before Louis could savour his gain, however, Charles’ daughter was married to Maximilian Habsburg, the future Holy Roman Emperor, whose troops threw the French out the following year.

When Charles Quint (who was also Charles I of Spain) became Emperor he set about rebuilding the fortifications of the town in 1536. 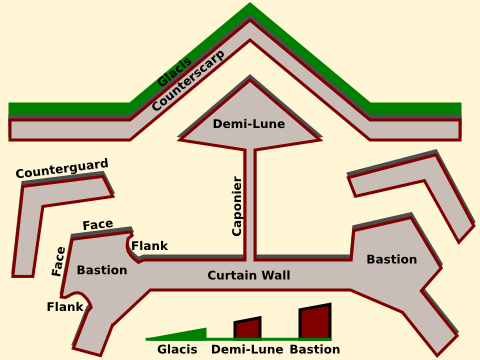 The work by Jacopo Seghizzi would last twenty years because the old castles were no-longer robust enough to withstand an assault by modern artillery. A new form of bastioned edifices sprang up where the walls were greatly strengthened with earthworks to soak up the impacts of cannon balls. A bastion is an arrow headed structure which jutted out of the walls. Its two sides facing the enemy whilst the two flanks protected the walls.

The complete structure was designed on a slope to ensure that the attackers could not see the inner wall until they had already gained the outer defences.

The basic principles behind these mutually protecting walls and positions were still being adhered to up until the outbreak of war in 1914. The invention of melinite (Lyddite to the British) however, increased the destructive power of modern artillery shells to such an extent that only the most heavily protected forts could withstand them (one of the reasons that the French began downgrading the forts at Verdun). 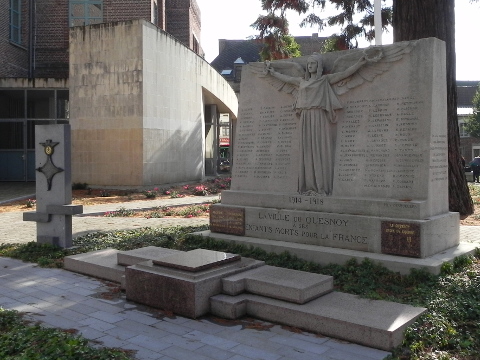 The wars of what belonged to whom continued over the next century. Louis XIV’s General Turenne arrived with a French force in 1654 and seized the town after a siege lasting a number of weeks. Under the Treaty of the Pyrénées in 1659 the town was formally handed to France along with southern Hainaut (the northern half is now the Province of Hainaut in Belgium).

Louis XIV set a young engineer called Vauban to work on the fortifications (because if you could take a citadel then so could someone else) and Le Quesnoy was Vauban’s first major work. The five existing Bastions were augmented by three new ones. With one slight exception the town had changed little by 1918. 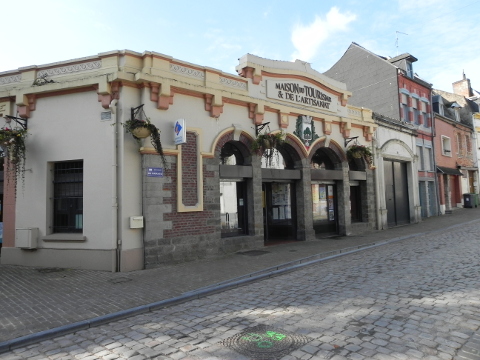 The exception was brought about by the Austrians capturing the town in 1712. They managed to do so by coming along the strip of land towards the Porte Fauroeulx (Near the Tourist Office). The town was retaken by the French a few months later and realising the seriousness of this weak point they decided to add a massive Hornwork to that strip of land—explaining the Porte de Landrecies being further down the road.

The town fell to the Germans on 23rd August 1914 and remained in their hands for the entire war—bar one week. 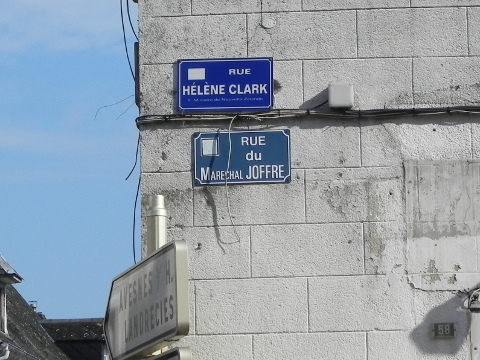 The street renamed in honour of New Zealand’s Prime Minister

The New Zealand Division found themselves confronted by a well garrisoned fortress with almost four kilometres of fortified wall protected by numerous outer emplacements, in part surrounded by a water filled moat and elsewhere overgrown with trees and bushes forming a maze of a defensive system.

The liberation of Le Quesnoy
The New Zealand Memorial