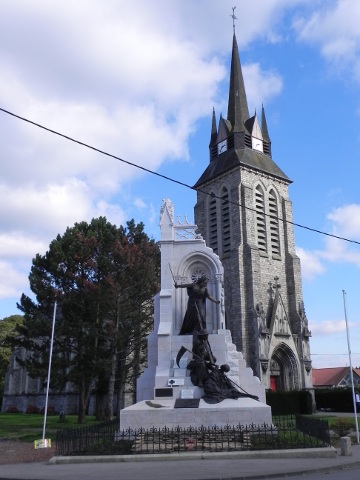 La Couture is a small village some eight kilometres north-east of Béthune in the Pas de Calais. It is situated just behind the battlefields of Neuve Chapelle and Richebourg.

From Béthune follow the signs for Armentières until you are on the D171. Continue on this road through Essars and Le Touret village.

At Le Touret turn left following the signs for La Couture. On reaching the village turn left towards the church. The memorial is immediately in front of the church on the left.

At 0415 hours on 9th April 1918 the Germans launched Operation Georgette. Colonel Bruchmüller’s artillery orchestration began its work as it had done a few weeks before against the British on the Somme. Pounding all centres of communication and identified HQ’s emplacements as well as the front line and artillery positions. Whole sectors were drenched with gas and the Portuguese Artillery noted their infantrymen starting to retire through them long before the actual attack had begun.

In the north of their line the 4th (Minho) Brigade did their best to stem the tide in front of Laventie but by 1100 hours it had been taken along with almost all the Portuguese 4th Brigade.

Elsewhere, the line collapsed despite being bolstered by the British as fast as they could with the 1st King Edward’s Horse and the 11th Cyclist Battalion.

A stand was made at Lacoutre by the Portuguese 13th and 15th Battalions aided by the arriving British but even here the position became untenable by 1145 hours.

The hole created in the line was plugged as well as possible by the British 50th (Northumbrian) and 51st (Highland) Divisions. For the CEP the battle was finished.

Their losses amounted to nearly four hundred killed and 6 500 captured.

Their participation in the battle, though, earned Portugal the right to participate in the victory parade and a place at the peace conference in Paris.

The Portuguese National memorial is located on a site given to them by the local council in September 1923. On the 11th November that year, the first stone was placed and five years later the sculpture was inaugurated in the presence of numerous dignitaries from Portugal, France and Belgium including Maréchal Joseph Joffre.

At the time of the monument’s inauguration the church had yet to be rebuilt and was still a pile of ruins.

The sculptor António Teixeira Lopes has depicted a Portuguese soldier (Note his British helmet) fighting amidst the ruins of a Gothic cathedral. The enemy is depicted as death himself replete with his scythe.

Behind the soldier, Portugal herself brandishing the sword of Nuno Álvares Pereira assures that victory will be gained.

Condestável Nuno Álvares Pereira was largely responsible for Portugal’s ability to defend herself against Castile during the period of 1383-1385 (A period in which Castile attempted to reclaim the throne of Portugal).

In later life he retired to a monastery and devoted the remainder of his days to prayer. He was canonised on the 26th April 2009 by Pope Benedict XVI.

His only daughter married the Duke of Braganza which provided Portugal with its royal family.

It is rather ironic therefore that Portugal had become a Republic by the assassination of the king and crown prince in 1908 and the revolutionary overthrow of the last of the Breganzas, Manuel II in 1910.

Contrary to many of the royalist party the deposed king sided with Britain and France and worked tirelessly for the Red Cross throughout the war.

Much of the plight of the Portuguese Expeditionary Corps can be placed at the feet of their government which towards the end of the war favoured a German victory – some royalists also believed that a victory for the Kaiser would increase their chance of regaining the monarchy.

The memorial received a superb cleaning in 2010 returning it to pristine condition.