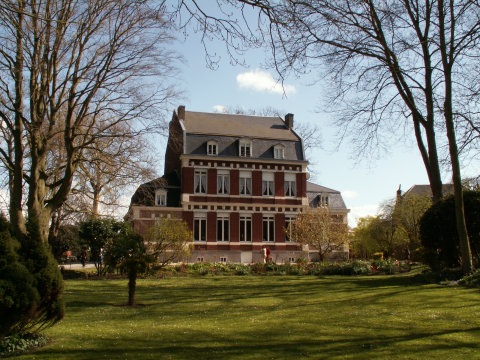 Surrounded on three sides by the banks of the River Lys this extraordinary manor and garden straddles Artois and Flanders.

This area’s history is bound up with that of the fortunes of the Kings of England and France, the Dukes of Burgundy, and Charles Quint Holy Roman Emperor and King of Spain (Father of Philip II of Armada fame).

In the 9th Century the small town of Papinghem become a place of pilgrimage inspired by a saintly hermit by the name of Venant who had become the guide and teacher of Princess Isbergues (Daughter of the French King Pepin). The princess was extremely pious and declined the hand of an English Prince praying that she be disfigured and thus lose her legendary beauty. Her wish was granted and she became ill with a plague. The Prince in his rage blamed Venant and had him executed in 796 throwing his headless body into the Lys. Isbergues recovered the body and eat a fish that she found on it. Her illness was miraculously cured and she had Venant given a royal burial.

Venant’s burial place became renowned for its cures and it wasn’t long before merchants set up a larger town to cater for the new industry.

In 1094, it was decided to change the name of the town to that of Sanctus Venantius and so eventually to that of Saint Venant. You will note that its coat of arms incorporates two fish.

The ravages of the hundred Years War flowed around St Venant sometimes it was English sometimes French. It was then fought over by numerous Kings of France and Dukes of Burgundy until eventually passing by dowry to the Holy Roman Emperor. In 1520 François I met Henry VIII of England with the intent of forming an alliance against Charles Quint.

However following his victory over the French, Artois passed definitively into the Spanish Netherlands and Charles Quint had a citadel built at St Venant to keep the French at bay.

The Spanish domination would not last very long for in 1639 Louis XIII decided to set about seizing back Artois and Flanders for the French crown. Arras would fall to the French in 1640 and five years later St Venant fell to Marshal Turenne’s forces only to be retaken by the Spanish a year later. In 1647 Turenne took the town once more and following the Battle of the Dunes that same year (Aided by Cromwellian soldiers) the region became French. The only exception being the port of Dunkerque which was given to England as payment for her aid (It was sold back to the French by Charles II — at a tidy profit).

Under the rule of Louis XIV, Vauban tidied up St Venant’s defences and had a Powder Store built in 1669. Today it forms part of La Peylouse’s outbuildings.

In 1877 a rich family from St Omer built the current building as a summer holiday retreat. Whilst the exterior remained in keeping with those in the neighbourhood, the interior was decorated in an art deco style and with the latest fashions of Paris and Antwerp.

The garden is unusual in that almost all of its trees are of foreign origin. Many were planted in the 18th Century whilst others date back as far as the 17th Century. St Venant was badly damaged during the war with the rather splendid church being completely destroyed. However, despite being for a while in No Man’s Land the manor and its trees would survive all but unscathed.

By chance the owner died just before the First World War and in 1914 the building and grounds were requisitioned by the British Expeditionary Force and used as a Headquarters. It would see Scots, Irish as well as Indian Forces using the premises.

Then in May 1917 it came the turn of the newly arrived Portuguese Expeditionary Corps to take up residence.

They would remain here until the Battle of the Lys in April 1918 forced a general retirement along the line. 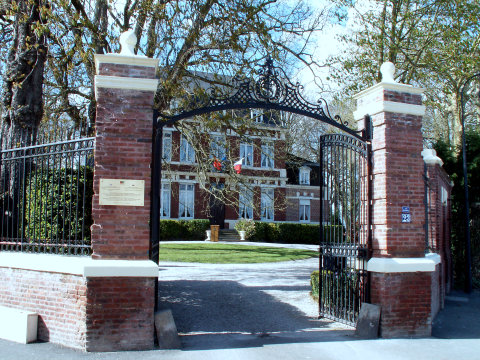 The entrance with the new plaque on the left pillar

The house would be bought and sold on a number of occasions until coming into the ownership of M Didier Rousseau and his wife in the 1980s. Liking the style of the building they changed very little and were quite stunned when in 2004 they received a visit by some officials from the Portuguese government who informed them that their house was of historical importance to the Portuguese military.

Thus was born a bond of friendship that continues to develop between the town and the Portuguese.

There are now over a million French people with a Portuguese background and this area is one of the great centres of their community. Like many a British soldier the Portuguese decided to settle and slowly became absorbed into the local way of life — without losing their own cultural background. 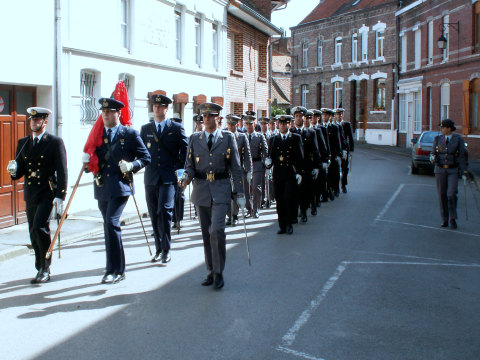 On 12th April 2008 a commemoration marking the 90th Anniversary was organised at La Peylouse.
The Portuguese Minister for Defence: Nuno Teixeira was present with M and Mme Rousseau to greet the Député Maire of St Venant: M André Flajolet, Generals from both France and Portugal and the President of Portuguese Veterans’ Affairs. 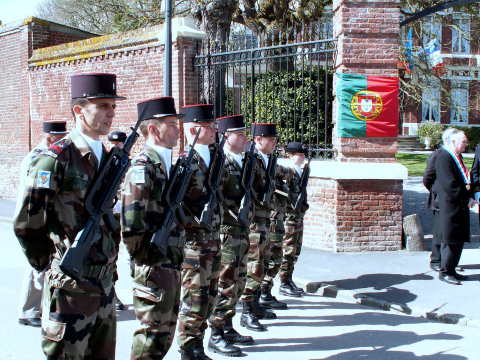 A memorial plaque was unveiled marking the building’s importance in Portuguese military history. 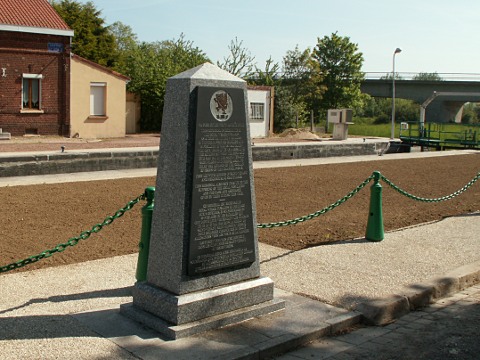 The memorial to the Royal Welch Fusiliers

St Venant saw a great deal of fighting in May 1940 and there is a memorial to the Royal Welch Fusiliers by the canal lock.

During the fighting the SS executed a number of British soldiers taken as prisoners of war. They are buried in the Communal Cemetery which can be reached by a short walk along the canal bank (Or you can drive by crossing the main road at the church and following the signs for the Cimetière).

A short drive from here will take you to a memorial plaque to the Durham Light Infantry who defended the Guarbecque River in May 1940. The village church at Guarbecque itself is worthy of the detour.