The cemetery lies just to the south of Neuve Chapelle on the D 947 between Armentières and Béthune. It is within a few hundred metres of the Indian Memorial at the crossroads known as La Bombe (Port Arthur) on the D 171.

There is a good parking area at the Indian memorial a short walk away. 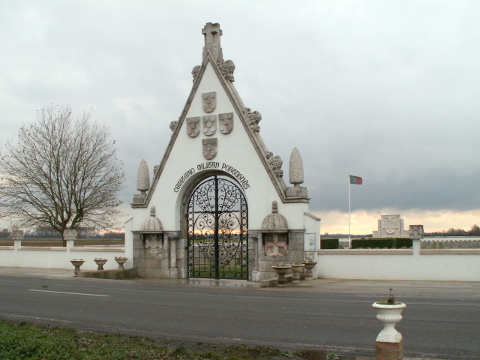 At 0415 hours on 9th April 1918 the Germans launched Operation Georgette. Colonel Bruchmüller’s artillery orchestration began its work as it had done a few weeks before against the British on the Somme. Pounding all centres of communication and identified HQ’s emplacements as well as the front line and artillery positions. Whole sectors were drenched with gas and the Portuguese Artillery noted their infantrymen starting to retire through them long before the actual attack had begun.

In the north of their line the 4th (Minho) Brigade did their best to stem the tide in front of Laventie but by 1100 hours it had been taken along with almost all the Portuguese 4th Brigade.

Elsewhere, the line collapsed despite being bolstered by the British as fast as they could with the 1st King Edward’s Horse and the 11th Cyclist Battalion.

A stand was made at Lacoutre by the Portuguese 13th and 15th Battalions aided by the arriving British but even here the position became untenable by 1145 hours.

The hole created in the line was plugged as well as possible by the British 50th (Northumbrian) and 51st (Highland) Divisions. For the CEP the battle was finished.

Their losses amounted to nearly four hundred killed and 6 500 captured.

Their participation in the battle, though, earned Portugal the right to participate in the victory parade and a place at the peace conference in Paris. 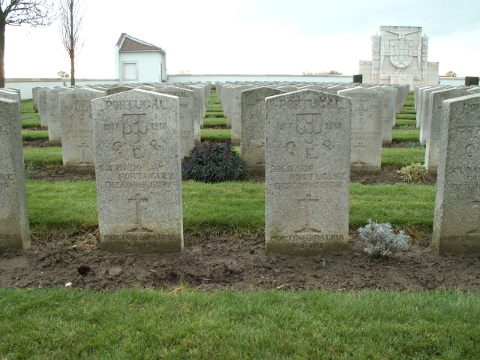 There are 1,831 graves in the cemetery, 239 of them unknown (Desconhecido). Not all of them were amongst the casualties of the battle of 1918 as some have been brought in from as far away as Belgium. 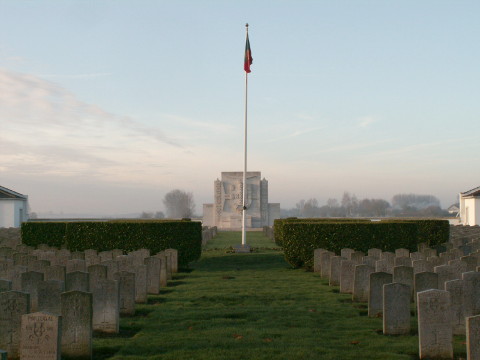 Immediately opposite the cemetery is a small shrine dedicated to Our Lady of Fatima which was added in 1975.

There is also a small monument and cemetery for Portuguese soldiers in the Boulogne East cemetery.