To the north west of Verdun and about twelve kilometres from the American Meuse-Argonne Cemetery is the small town of Montfaucon d’Argonne.

From Verdun take the D 964 as far as Charny sur Meuse where you turn left into that village and take the D 38 towards Chattancourt and past the Verdun battlefield site of Mort Homme.

Just after Esnes en Argonne turn right onto the D 18 towards Malancourt and Montfaucon.

From the American Meuse-Argonne cemetery take the D 123 towards Cunel where you turn right towards Nantillois and Montfaucon on the D 15.

On arriving in the town follow the signs for the monument which is at the top of the hill.

There a number of military cemeteries and Great War sites in the area. 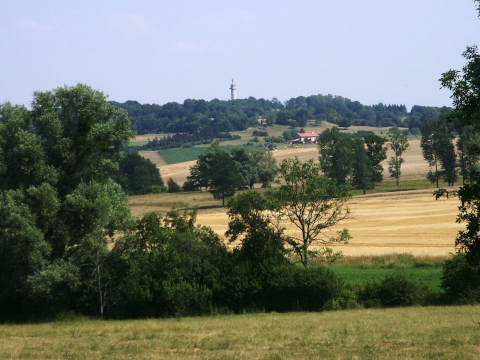 The importance of the hill is all too clear

A gamble that lost

The Meuse-Argonne offensive was part of the Hundred Days which had begun on 8 August 1918 and would end with the German’s signing the Armistice on 11th November.

Throughout the spring of 1918 the German General Ludendorff had committed his armies to full scale assaults on the allied lines : on the Somme ; in Flanders ; in Champagne ; on the Marne. The Germans had made notable gains, especially on the Somme, but ultimately the Allied lines had managed to hold.

The last of these offensives had taken place on 15 July 1918 in Champagne and had been repulsed by French and American troops.

Why the worry about the Americans

It was these American troops that Ludendorff feared. Not so much in themselves, but in their numbers and scale of equipment. The German General Staff knew all too well that they had to smash the Allies in 1918 ; by 1919 American troops would swing the balance in numbers. As to equipment, whether, guns, aircraft, or even food come to that, the British naval blockade on Germany would have reduced its capabilities yet further.

The civilian population of Germany was suffering hardships that the troops in the front line were all too aware of. German industry could not get hold of vital raw material to produce war materials in the quantities required.

Thus for Germany, it was now or never but Ludendorff’s gamble : The Kaiserschlacht had been played and lost. The Allies were striking back — and hitting hard.

General John Pershing, Commanding the US Forces may not have agreed that his men were fully ready but he recognised the moment (In July he had initially refused to allow Americans to take part in the Australian led battle at Le Hamel on the Somme). 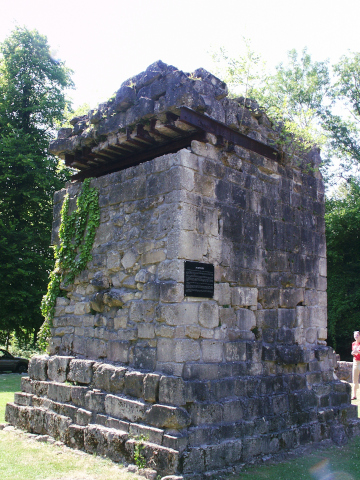 Near the memorial you will see this German observation post

North of Verdun are a number of ridges providing excellent observation and domination of the surrounding areas. Some of these like Mort Homme and Vauquois had seen bitter fighting for years. After Vauquois came the ridges of Montfaucon and then Romagne and Cunel. It was these three ridges that the Americans were set to capture.

The Germans had built a strong defensive position to a depth of about twenty kilometres using the lie of the land to its utmost.

Under cover of darkness 200,000 French troops were slowly withdrawn from the assault lines and replaced by 600,000 Americans of their 1st Army. The Germans do not appear to have suspected anything until it was too late. At 0230 hours on 26 September 1918 the American artillery opened up with a three hour bombardment of the German front lines. At 0530 hours the assault was launched.

Vauquois was finally mopped up by the 35th US Division, its lunar landscape stunning the young American soldiers. 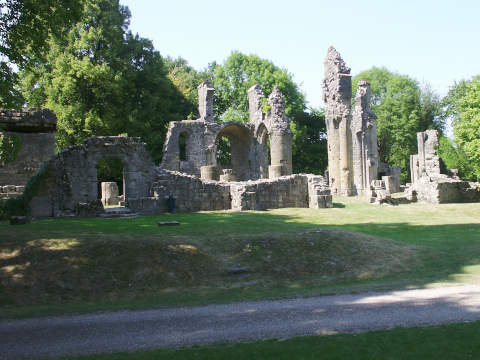 Little remains of the old church

V Corps now moved northwards to the left of Montfaucon and III Corps to the east. Although caught by surprise the Germans put up some resistance and it would not be until midday on 27 September that Montfaucon was in the hands of the 79th US Division. What had been a superb artillery observation point for the Germans was now turned against them.

The slight delay in taking Montfaucon had, however, allowed the Germans to push in reinforcements who fought for every metre of territory. It would take until 14th October for the two Corps to finally take Romagne and Cunel.

French and American forces finally cleared the Argonne Forest on the 31st October and the final phase of the war began. 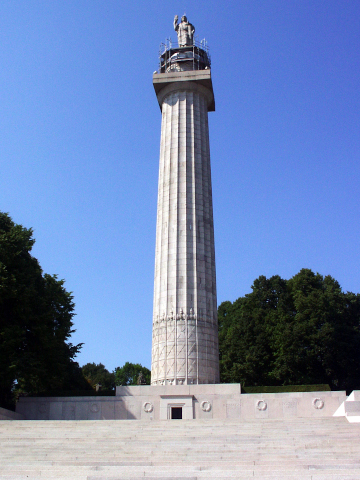 Situated in front of the ruins of the old town the memorial consists of a 60 metre doric column made of granite. On the top is a statue representing liberty.

It commemorates the American victory during the Meuse-Argonne Offensive which began on 26 September 1918 and continued until the signing of the Armistice on 11th November.

There is an observation platform which can be reached by climbing the 234 steps.

The monument was inaugurated in 1937.

Details of visiting hours can be had from the ABMC who are responsible for the memorial.