Romagne sous Montfaucon is a small village about 40 km to the north-west of Verdun. Take the D 964 from Verdun northwards as far as Sivry sur Meuse where you turn left onto the D 123 which will bring you through Brieulles sur Meuse, Cunel and into the cemetery (the road goes through it).

If you are already visiting the area the D 998 connects the village with Varennes en Argonne or the D 15 from Cunel takes you to Montfaucon d’Argonne. Both of these locations have American memorials in their areas. 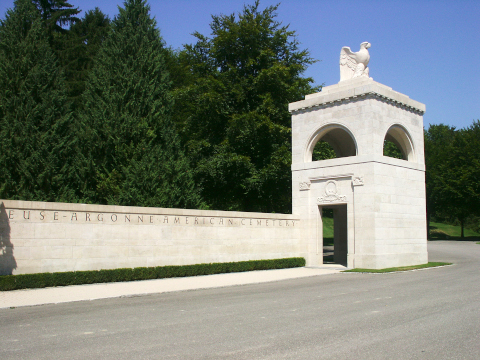 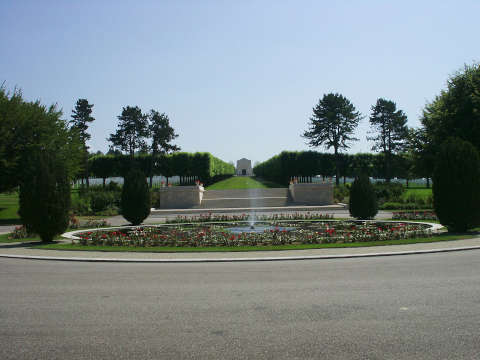 This enormous cemetery covering 52 hectares is open everyday of the year except 25th December and 1st January between 0900 and 1700 hours, staff are available in the visitors’ building near the main entrance and fountain. 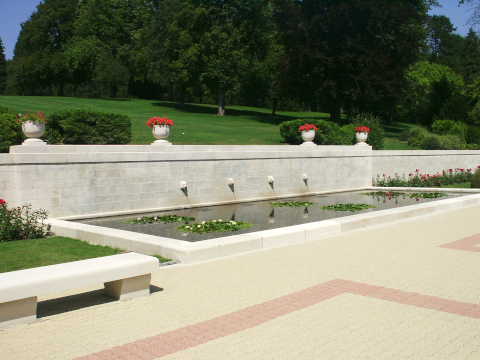 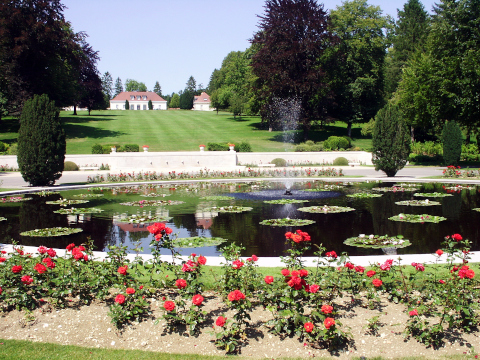 Like the other American war cemeteries it is maintained by the American Battle Monuments Commission (ABMC).

A temporary cemetery was first established here on 14 October 1918 in an area captured by the 5th and 32nd US Divisions.

Panels on the Memorial Chapel walls record the names of a further 954 missing.

As a comparison the WW2 D-Day Landings Cemetery in Normandy contains 9 386 graves. 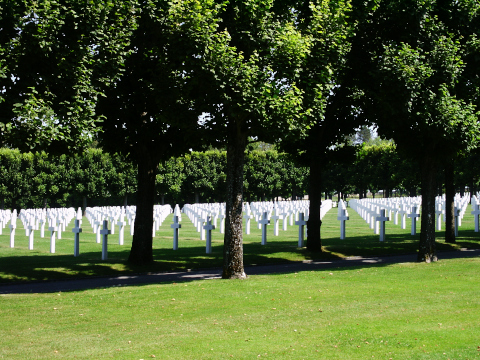 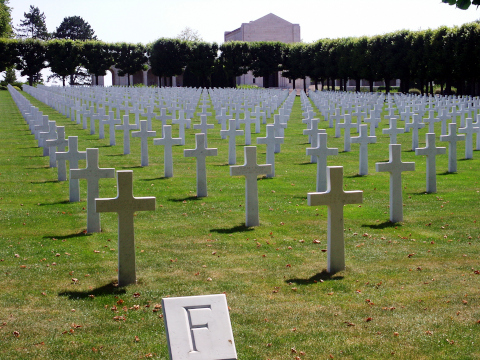 The graves are divided up into eight separate plots each surrounded by linden trees.

Burials are marked by white marble crosses or Stars of David (there are 268 of these). Inscribed on each are the casualty’s name ; rank ; unit details ; State ; date of death.

Information on the location of a particular grave can be obtained from the visitors’ centre or by using the search facility on the ABMC site.

The remains of many American casualties were repatriated after the war. The ABMC lists ONLY those casualties buried or commemorated within its cemeteries. If the casualty was repatriated then the details will be found in the receiving civilian cemetery — wherever that may be. 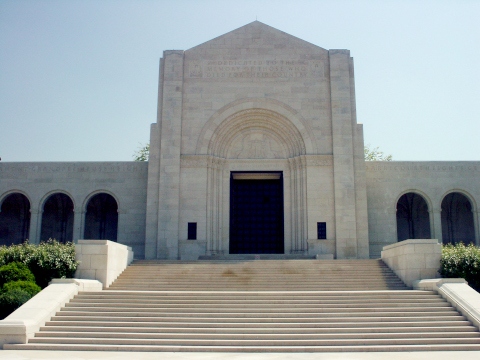 At the far end of the cemetery on the crest of the hill is the Memorial Chapel. Within is a chapel of remembrance for private prayer and contemplation. 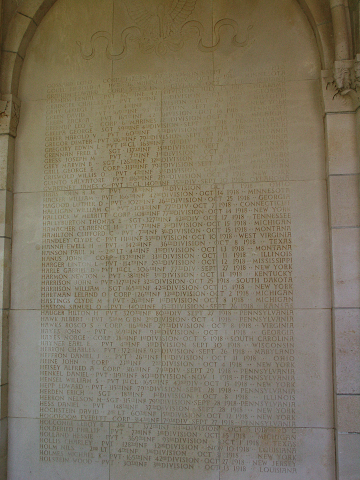 Around its exterior walls are inscribed the names of the 954 missing. This list including those from the US expedition to northern Russia in 1918-1919. Rosettes mark the names of those who have since been recovered and identified.

Above its doors you can read the inscription :

Dedicated to the memory of those
Who died for their country 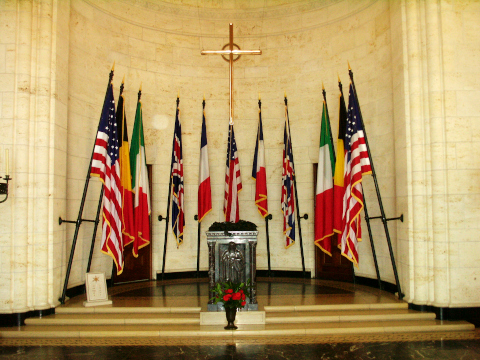 Flags of the nations who fought on the Western Front
(Russia is missing — despite having regiments who were still fighting with the French.) 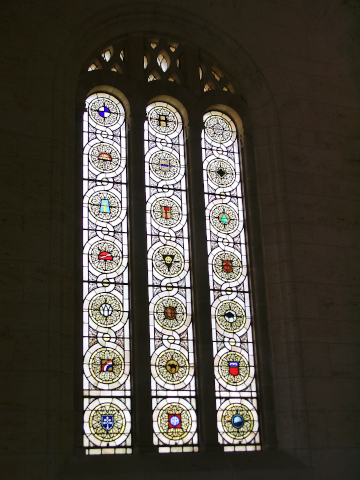 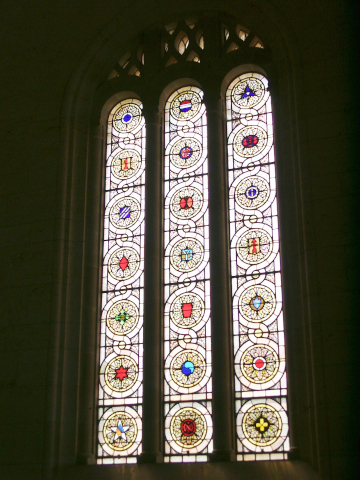 The stained glass windows either side of the altar show representations of the various Divisional and Unit Insignia of the American Expeditionary Force.

Amongst the rows you will find nine recipients of the Medal of Honor.
They are all marked in gold and carry a gold star. 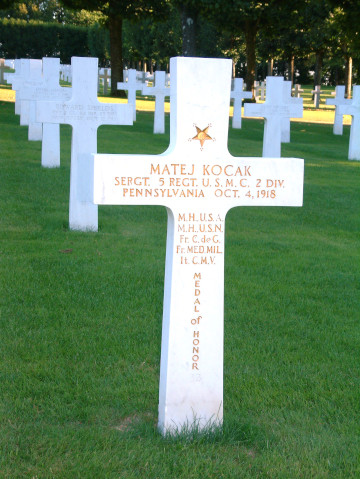 For extraordinary heroism while serving with the 66th Company, 5th Regiment, 2nd Division, in action in the Viller-Cotterés section, south of Soissons, France, 18 July 1918.

When a hidden machine gun nest halted the advance of his battalion, Sgt. Kocak went forward alone unprotected by covering fire and worked his way in between the German positions in the face of heavy enemy fire. Rushing the enemy position with his bayonet, he drove off the crew.

Later the same day, Sgt. Kocak organized 25 French colonial soldiers who had become separated from their company and led them in an attack on another machine gun nest which was also put out of action.

For his actions he received both the Army & Navy Medals of Honor. 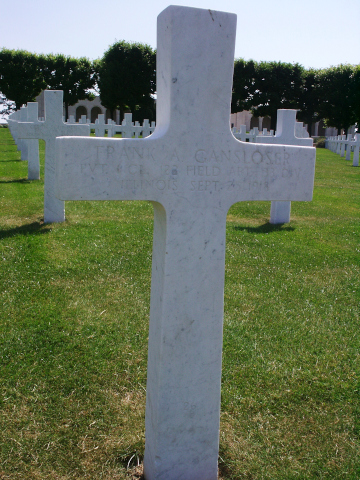