Webmatters : Varennes en Argonne : The Pennsylvania Memorial to the 28th US Division

To the north west of Verdun, in the midst of the Argonne battlefields, lies this picturesque town on the banks of the Aire river.

If coming from Verdun and its battlefields via the D 38 (Passed Mort Homme and the Butte de Vauquois) cross the bridge and turn left into Rue Louis XVI. The memorial is easily seen on the right just after the clock tower.

Coming from the American Meuse-Argonne Cemetery to the north you will reach Varennes via the D 946. Once again cross the bridge and turn left.

There is plenty of parking space available. 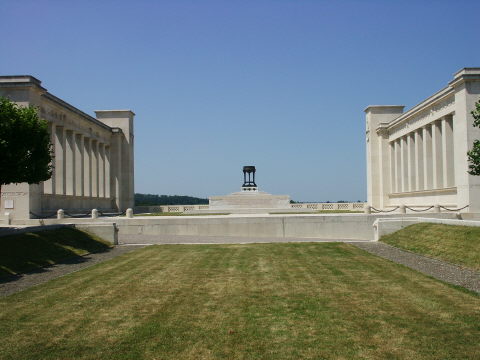 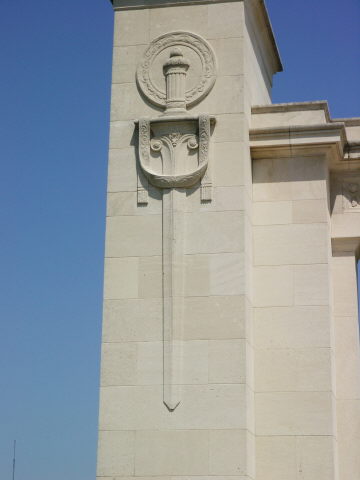 On the last column you will see a sword

Varennes was occupied by the Germans in the very early stages of the war. Four years of bombardment by the French almost completely demolished it.

In preparation for the Meuse-Argonne offensive of September 1918 the American 1st Army took over the entire sector between Pont-au-Mousson (near Metz), around Verdun and on into the Argonne Forest at La Harazée — an area infamous for terrible fighting in 1915.

There were more American Divisions to the west but they were within the French IV Army.

On 26th September the offensive commenced and the Americans found themselves with little in the way of opposition. Varennes and Cheppy (a few kilometres away to the east) were liberated and the Butte de Vauquois cleared.

Another two days of fighting would take the American line up as far as Apremont. The next month would see much harder fighting as the Americans and French tried to drive ever closer towards Sedan.

Unlike many some of the other local villages Varennes has been rebuilt and the historical buildings, such as the clock tower, restored.

The monument is situated at the former site of the old château and its church dedicated to Saint-Gengoult de Varennes. Both were destroyed between 1640-1642.

Constructed of of stone and white marble the memorial has a neoclassical style. On either side of the esplanade are columned peristyles (in theory, covered walkways). The final columns have great swords carved on them. 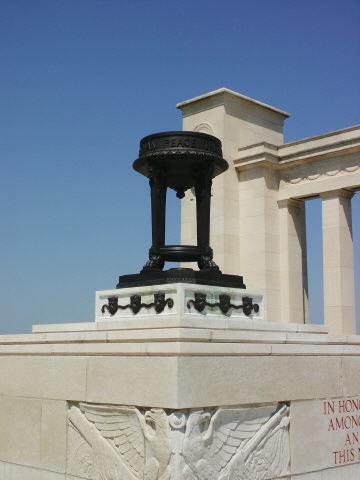 At its centre is a bronze basin which sits upon a tripod decorated with Greek soldiers both raised upon a pedestal.

On the basin is a quote from United States President Woodrow Wilson :

The right is more precious than peace

The memorial is the work of the Franco-American Paul Philippe Cret (1876-1945) who worked for the American Battle Monument Commission (A.B.M.C.) created in 1923

He was also responsible for the American memorial at Château-Thierry.


The US Memorial at Château-Thierry

On the pedestal itself is the dedication :

The memorial was inaugurated on the 30th May 1928