Webmatters : Varennes en Argonne and the flight of Louis XVI

The Flight to Varennes

To the north west of Verdun, in the midst of the Argonne battlefields, lies this picturesque town on the banks of the Aire river.

This area also saw a lot of American participation during the Allied offensives of 1918 — including the liberation of the town on 26 September 1918. 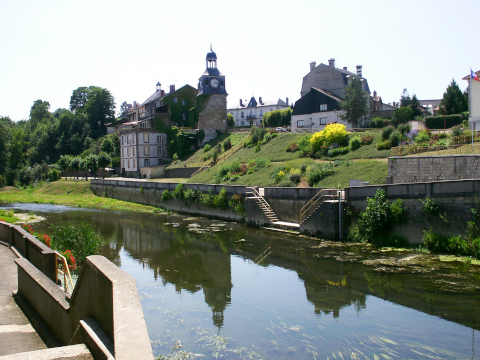 The clock tower from the bridge

On the evening of 20 June 1791 Louis XVI, his wife Marie Antoinette and the royal family managed to escape from the Tuilleries in Paris with the hope of fleeing revolutionary France. Their initial destination was the fortress town of Montmédy, where Général de Bouillé was stationed with a force of loyal soldiers.

From there it is probable that they intended to continue into the Austrian Netherlands (now Belgium) and the Abbey of Orval where they would be met by Austrian troops — Marie Antoinette being the daughter of the Hapsburg Emperor.

The Citadel of Montmédy
The Abbey of Orval

Before leaving Paris Louis wrote and left behind documentation stating that he had never voluntarily agreed to any of the demands of the new government. Letters which would prove fatal.

Approaching midnight the following day : 21st June, the family arrived here in Varennes with their small escort of soldiers.

Unfortunately for them they had already been recognised. Further south, along what is now the A 4 Autoroute leading from Paris towards Verdun, they had changed horses at the relay station at Sainte Menehould. Whilst there, the postmaster, Jean-Baptiste Drouet, thought he recognised the king from the head on a coin.

Having discovered that they were headed for Varennes but unable to do anything immediately, Drouet gave chase to the royal cortège with a friend called Guillaume. The pair managed to get to Varennes before the royal party and raised the alarm.

The bridge was barricaded off and a call went out for all local National Guardsmen to come to their aid. On the arrival of the royal coaches they found the road blocked and demands being made for their passports.

Drouet had the local Procureur Jean-Baptiste Sauce, effect a search of the carriages to confirm his suspicions concerning the identity of the passengers.

Although he denied it at first, eventually, at gun point, the King admitted who he was. As Drouet was later to point out, the guns had not been loaded, and the escort could probably have forced the day.

With the aid of a friend, four local National Guardsmen and two foreigners, Louis and Marie Antoinette were arrested and taken to Sauce’s house.

There is a still a mystery as to what happened to two carriages that accompanied the king. These, according to legend, were stacked with treasure. One version of the legend says that the monks at Orval suddenly acquired a vast treasure and that was part of the reason for revolutionary troops crossing the border and burning the abbey down. The treasure, if it ever existed, has never been found.

This was constructed in 1793 on the site of the former chapel of the local manor. It was at this point that the royal family were originally confronted and arrested.

The tower was burnt by the Germans on 14 September 1914 but restored after the war.

Just over the bridge from the Clock Tower is the Grand Monarque Hotel.

Louis’s new escort and relay of horses from Général de Bouillé’s own stables, had been waiting for him here under the command of de Bouillé’s second son and a Captain Raigecourt.

Neither of them however had considered it worthwhile to actually look out for the king’s carriages on the far side of the river and to guide them to the new horses. The first they knew of the arrival of the royal party was the sound of the alarms in the village as the bridge was barricaded. It was now too late — Louis’ fate was sealed. 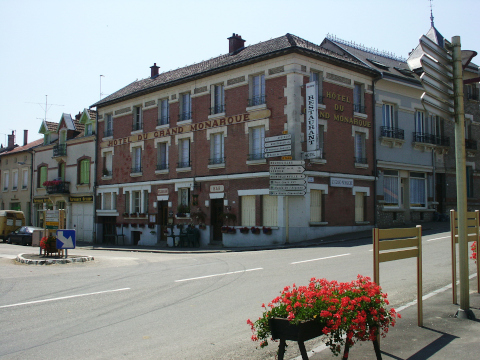 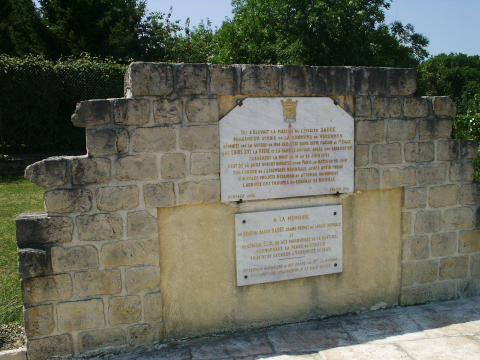 By the bridge you will see this small monument.

The first floor of the house of Procureur Sauce, was where the royal family were held over night, under arrest, pending their return to Paris on the morning of 22 June 1791.

The building was destroyed during the First World War and a memorial plaque is all that exists today to attest to the location of the house.

The documents that Louis had left behind in Paris were to prove fatal to the royal family. Any intention by the Assembly to create a constitutional monarchy was removed. The king had shown by trying to leave the country that he could not be trusted and the opening of a war with Austria and the subsequent intrigues of Marie Antoinette only exacerbated her situation.

On 21 January 1793 Louis XVI was sent to the guillotine, on 16 October at beginning of The Terror, Marie Antoinette followed him.

There is a museum in the town dedicated to the story as well as the Great War. Immediately alongside it is an impressive memorial to the soldiers of the 28th US Division on the site of the former château. The soldiers came, for the most part, from Pennsylvania.