Webmatters : Cheppy : The Missouri Memorial to the 35th US Division

To the north west of Verdun, in the midst of the Argonne battlefields, Cheppy is situated two kilometres east of the picturesque town of Varennes en Argonne.

If coming from Verdun and its battlefields along the D 38 (Passed Mort Homme and the Butte de Vauquois) enter the village by taking the D 19. The monument is on your right.

Coming from the American Meuse-Argonne Cemetery to the north you will reach Varennes via the D 946. Turn left before the bridge and continue down the D 38 to Cheppy.

Parking space, with picnic tables, is available up near the junction with the D 38. The monument is situated on the bend of the road so park and walk the hundred metres. 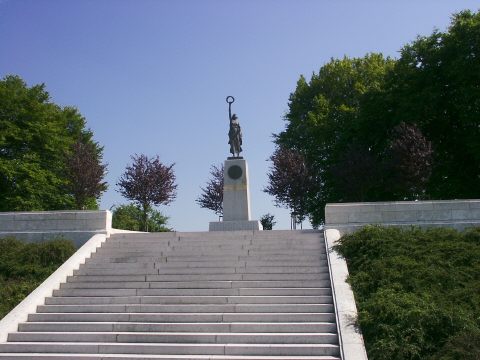 The woods around Cheppy were soon fortified by the Germans in late 1914. Bordering the strategically important Butte de Vauquois, a commanding hill (well worth visiting), the woods became a base for the German Engineers working the tunnels under the hill. As such both wood and village were subjected to constant bombardment by the French artillery.

The village was completely demolished

In preparation for the Meuse-Argonne offensive of September 1918 the American 1st Army took over the entire sector between Pont-au-Mousson (near Metz), around Verdun and on into the Argonne Forest at La Harazée — an area infamous for terrible fighting in 1915.

There were more American Divisions to the west but they were within the French IV Army.

On 26th September the offensive commenced and the Americans found themselves with little in the way of opposition. Cheppy and Varennes (a few kilometres away to the west) were liberated and the Butte de Vauquois cleared.

Another two days of fighting would take the American line up as far as Apremont. The next month would see much harder fighting as the Americans and French tried to drive ever closer towards Sedan.

The future Senator for Missouri and President of the United States, Harry Truman, stayed in the ruined village on 25 December 1918. 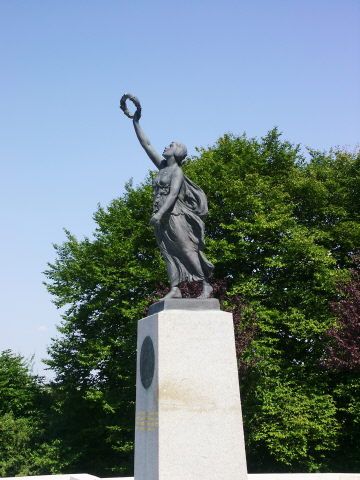 A bronze figure of a woman stares towards the sky whilst thrusting aloft a laurel wreath in her right hand. Her left hand holds a branch by her side. On the pedestal beneath her is the seal of Missouri and at the base the word MISSOURI is engraved in the granite.

On the front is a dedication in French on the rear it is repeated in English :

Nancy Coonsman Hahn, from St Louis, Missouri, won the competition to design the memorial which she named Victory.