For centuries Ieper (Ypres in French and known to the British throughout the First World War as Wipers), was one of the great cloth marketing towns along with Ghent and Bruges.

It managed to keep its position by switching sides whenever necessary; as its strategic importance required. Sometimes fighting against the French, sometimes with them.

It was their decision to fight with the French in 1383 (over the succession of the Pope) that was too lead to their downfall.

Ghent and Bruges sided with the Vatican and Urban VI, as opposed to Ieper’s support for the French Clement VII at Avignon. The surrounding area was destroyed by an English Army (definite irony there!) supporting by Ghent. A population that had been hundreds of thousands was to dwindle to mere thousands in the space of the fourteenth century as trade fell to their rival towns. 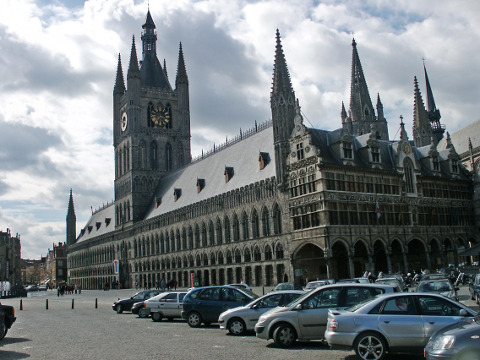 The Cloth Hall or Lakenhalle was built in the thirteenth century and demonstrated the wealth and power held by the merchants of the town.

The eastern wing and the belfry tower were started in 1260, with the western wing started six years later. It would take 44 years to complete.

The main façade is 125m long and the belfry 70m high with a carillon with 49 bells. 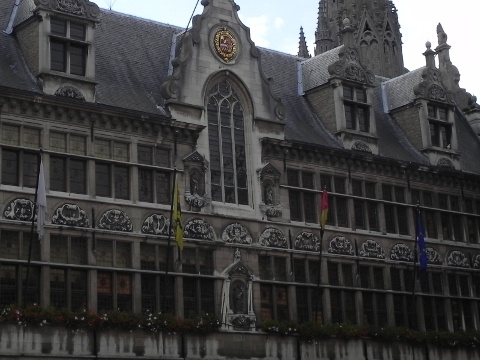 Ieper was all but completely destroyed during the First World War. In 1934 King Albert I and Queen Elisabeth opened the reconstructed belfry and the remainder of the hall slowly followed over the next 24 years.

Following the signs at the side of the hall takes you to the First World war museum: In Flanders Fields.

It was from the top floors that the populace indulged in the Kattenstoet every three years on the second Sunday in May.

The name means the Cats’ Death and involved hurling the towns cats out of the windows to their deaths – thus dispelling evil spirits. Abandoned in 1817 the festival was revived again in 1938 when toy cats were used.

The Cats festival is now the big event on the Ieper folklore calendar. Inside the front entrance of the Town Hall you will find the giant cats used in the parade – Cieper married Minneke Poes in 1971 and they were joined by their kitten Piepertje in 1974.

All around the square are cafes and restaurants. There is a very strong connection with the British and as in almost everywhere in this part of Belgium English is spoken. 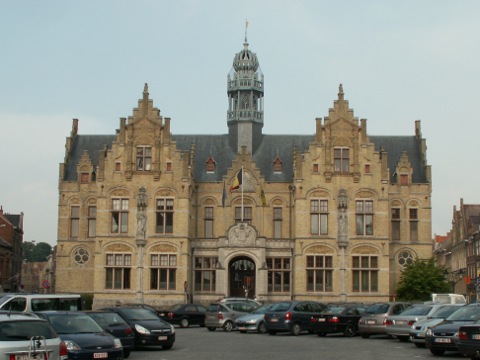 As you wander about the Grote Markt or sit and watch the world go past from a seat in a café, remember that all of this around you has been rebuilt.

For four years the German army was held at bay a matter of kilometres away by the Belgian, French and British armies.

It was not supposed to have been that way according to the original German von Schlieffen plan. The German army was supposed to have swung into France from the north via Belgium and on into Paris within a matter of weeks – before Russia would have a chance to react on Germany’s eastern border. 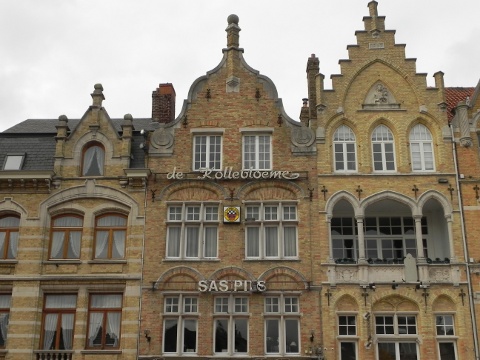 As things happened, the German Army was to be stopped at the Marne by the French, and the rest as they say is history – for Ieper, bloody history.

Here at Ieper the front formed a bulge: a salient, in military terms. Four battles were to be fought over this area. The 1st Battle of Ypres was fought out in October and November 1914 as the Germans and Allies raced for the sea in a bid to outflank each other.

The Belgians ensured that the Germans could not obtain their desired break through, by using the locks at Nieuwpoort, to the west of Ieper, to flood the plains.

Having settled into a system of trench warfare which stretched from here to Switzerland, the Germans tried in their spring offensive of 1915 to gain ground.

On 22 April 1915 gas was used for the first time at Steenstrate six kilometres to the north of Ieper. The 2nd Battle of Ypres had begun.

The offensive lasted for six weeks and resulted in the Germans bringinig themselves a few kilometres closer to Ieper, but at high cost to themselves with 38,000 killed or wounded.

Defending the line had been even more costly, with the British suffering 60,000 casualties, the French 10,000 and the Belgians a further 1,500. 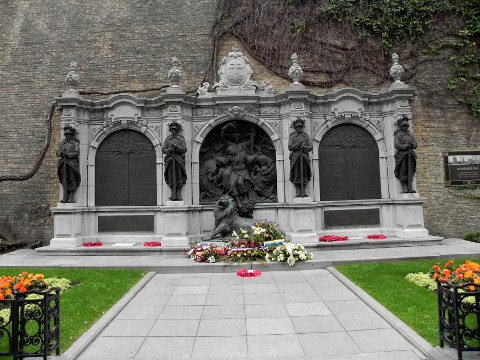 Ieper town’s War Memorial is behind the Cloth Hall

On 16 July 1917 the British commenced a two week bombardment of the German trenches along the Ieper salient. As it turned out the effect was negligible and when the infantry went over the top to begin the 3rd Battle of Ypres they were to find the German Army ready for them.

The battle of Passchendaele had begun, a battle that conjures up images of mud and tens of thousands of dead.

The cemetery and Memorial to the Missing at Tyne Cot, for many, will be the ultimate reminder of just what a few kilometres of territory cost in terms of human sacrifice. Not forgetting that as many German soldiers died in the mud as ours did.

You can walk around the ramparts to or from the Menin Gate, and alongside the Rijselpoort (Lille Gate) you will find the only British Cemetery within the town walls. This is the small Ramparts Cemetery. The familiar headstones look out across the moat, where on a summers day children will be found boating.

This walk along the ramparts is named after Rose Coombs MBE who was the author of the book: Before Endeavours Fade, dare I say it, the definitive guide to war memorials along the Western Front. If you don’t have a copy – shame on you. It is printed by After the Battle, and is currently in its seventh edition. If all else fails you should be able to get hold of a copy from the Public Records Office.

It was through the Rijselpoort (Or Lille gate) that most of the men of the BEF (British Expeditionary Force) were to leave Ieper on their way to the front.

It was probably the better of the two gates compared with the Menin Gate because its position on the south side of the town left it slightly less exposed to bombardment.