The memorial commemorates almost 35 000 servicemen from the United Kingdom, South Africa and New Zealand who died in the Arras sector between the spring of 1916 and 7 August 1918 (the eve of the Advance to Victory) and have no known grave. 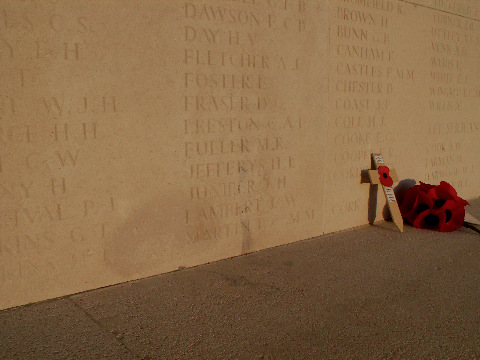 There are 11 VC winners commemorated amongst the missing. Note that their name is always preceded by the letters VC.

As with all Commonwealth Memorials the names are organised by Order of Precedence (The Regiment’s seniority — starting with the Royal Artillery), then the soldier’s rank and then his name. 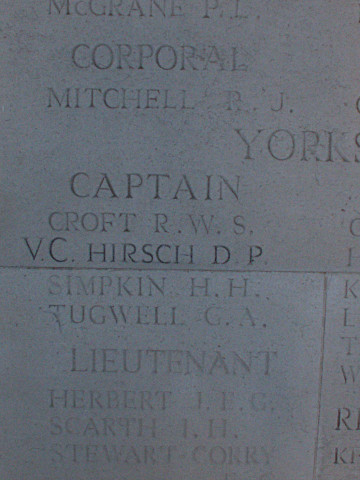 For most conspicuous bravery and devotion to duty in attack. Having arrived at the first objective, Captain Hirsch, although already twice wounded, returned over fire-swept slopes to satisfy himself that the defensive flank was being established.

Machine gun fire was so intense that it was necessary for him to be continuously up and down the line encouraging his men to dig and hold the position. He continued to encourage his men by standing on the parapet and steadying them in the face of machine gun fire and counter-attack until he was killed. His conduct throughout was a magnificent example of the greatest devotion to duty.

The others in their Bay order are:

Though not so easily found the following soldiers who faced their last moments in front of a firing squad are commemorated.

Not much is known about the circumstances of Byrne’s execution for desertion on the 28th October 1917. He served in the 1st Bn Royal Dublin Fusiliers under the alias of Monaghan, and would appear to have gone absent having become fed-up with his life at the front.

In the case of Private Fox of the 2nd Bn Highland Light Infantry things are clearer. On the 10th April 1916, during a weapons inspection, Fox became abusive to his Company Commander who had reprimanded him for having a dirty rifle. Not content with abusing his superior, Fox broke ranks and kicked him twice. Striking a superior officer whilst on active service was a capital offence and Fox could only claim stress and alcohol as his excuse. However witnesses refuted the drunkenness and perhaps as a result the stress was ignored as well. He was shot on the 12th May 1916. 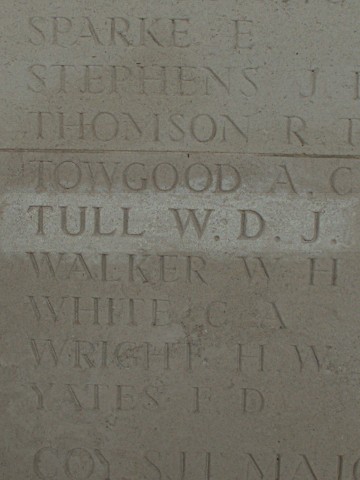 He played more than a hundred first team games for Northampton Town before the First World War intervened.

Walter Tull was born in Folkestone on 28th April 1888. His father, Daniel, was a carpenter from Barbados who had moved to Folkestone and married a local woman, Alice Palmer.

Alice died in 1895 and Daniel two years later. Whilst their two younger sisters remained with their step-mother, Walter and his elder brother Edward were moved to an orphanage in Bethnal Green, London.

Edward was adopted a few years later by a family from Glasgow and would become the first practising coloured dentist in the UK.

Left behind at the orphanage Walter started playing football with the other boys. His evident talent on the football pitch found him a place in amateur football where he gained a number of sporting medals.

In 1909 he was signed – for £10 – to the famous club Tottenham Hotspur (Spurs) becoming the league’s first black outfield player. (Arthur Wharton, a goalkeeper for Darlington and Rotherham United, had became the first black professional in 1889.)

Sadly, racist behaviour by some fans is not a modern phenomena and Walter was subjected to taunts and jeers making his stay at the club a difficult one.

In October 1911 he was signed to Northampton Town FC (The Cobblers) a team that was actually nine years younger than he was ! His stay proved to be a happy one and he appeared 110 times for the team as a wing half. In his first twelve appearances he scored nine goals.

On the 21st December 1914 he became the first member of the team to sign up and the 55th volunteer to join the famous 17th (1st Football) Battalion of the Middlesex Regiment. Following their training the battalion was moved to France in November 1915 as part of 2nd Division. Tull’s leadership qualities had him rapidly promoted to Sergeant, in time for the Battle of the Somme in July 1916.

He fell ill during the winter of 1916 and was sent back to England to recuperate. Whilst there his superiors pushed the idea that he should be commissioned as an officer.

This was quite a step for an army which at the time forbade any negro from becoming an officer. (Interestingly, you didn’t have to be British as would be the case today, merely from white European stock, which possibly got around the fact the Royal Family were of German descent).

Tull completed his training at Gailes in Scotland in May 1917 and was gazetted as a 2nd Lieutenant back into the Middlesex Regiment. He was sent to Italy for the Battle of the Piave with the 23rd (2nd Football) Battalion and was mentioned in dispatches for his gallantry and coolness under fire. He was therefore, not only the first black officer in the British Army, but also the first to lead British troops into battle.

Returning to France in 1918 Tull found himself in the thick of the fighting for Arras during the Germans’ Spring Offensive.

On the 25th March 1918 Tull was leading his men forward at Favreuil near Bapaume when he was brought down by a bullet. Despite gallant attempts by his men to retrieve his body it had to be left in no man’s land. It was never recovered and he remains one of the thousands of those who have no known grave commemorated on the walls at Arras.

On the 11th July 1999, a 2.5 metre high marble memorial to Walter Tull was unveiled at Sixfields Stadium, home of Northampton Town Football Club.

Bay after bay, the thousands of names drift past our eyes, becoming a blur, a simple haze. It becomes difficult to consider the tragedy before us.

It is so hard to spot them in the register and I am aware from taking photographs for people that many a name on the walls here is complimented by the grave of a sibling elsewhere.

Sometimes brothers, fathers, sons are scattered across the countryside, sometimes none of them have a known grave and can only be commemorated.

Here are a few to represent them all.

There are at least two pairs of brothers buried within the cemetery.