Following the failure to destroy the French and British trapped within the Dunkerque pocket the Germans now looked to the second part of their operation against France.

Operation Fall Gelb had finished and it was the turn of Fall Rot as the Panzer Divisions fresh from the pause that the infantry/Luftwaffe assault on Dunkerque had offered them, now turned south.

The marshy area around Dunkerque was not conducive to armoured operations so the Panzer Divisions had spent the time repairing their vehicles.

On the 6th June 1940 the Germans managed to break the French on the Marne and entered Paris on the 14th. The French government had already moved to Bordeaux where the 84 year old saviour of Verdun, Maréchal Philippe Pétain was given power to form a government.

On the 17th June Pétain made a broadcast to the nation in which he stated that it was his intention to seek an armistice. On the 22nd June 1940 French and Germans sat down in the Armistice Wagon of 1918 at Rethondes. France surrendered and the Vichy Regime under Pétain was only weeks away from being conceived.

Amongst those nations that recognised the new French Government were:
Australia, Canada, USA and USSR

The UK had a rather ambivalent attitude which was hardly surprising considering that it had recently destroyed part of the French Navy at Mers-el-Kebir in Algeria (preventing it from being used by the German Fleet).

Amongst those who felt that France should fight on was the French Prime Minister Paul Reynaud. Believing that Churchill and the UK would also continue to fight he sent Général Charles de Gaulle to London to sound out the British Government.

Whilst he was there Pétain came to power and the negotiations for an armistice began. Refusing to accept such a defeat, de Gaulle made a broadcast via the BBC on the 18th June. He called on all Frenchmen who might find themselves in Britain to rally to him.

France was not alone, it had an Empire, and alongside the British Empire who ruled the seas and were going to fight on, victory could be won. The Germans had won by better machinery and better tactics.

The same means by which we have been defeated can one day bring victory.

Although very few Frenchmen actually heard the broadcast, over the next few days de Gaulle made further broadcasts and the original broadcast l’appel du 18 juin is as famous to the French as Churchill’s we will fight them on the beaches is to the British.

Although his original speech was not recorded a subsequent broadcast via the BBC on the 22nd June was recorded, and a copy of the text of the 18th June has become part of French history.

In France it is seen by many as the foundation on which French Resistance would be based.

As the broadcast on the 18th June was in fact made before France surrendered, Pétain had de Gaulle sentenced to death in absentia for treason.

In return, de Gaulle never accepted the Vichy government as a legitimate regime. For de Gaulle, he, was the last member of the true government that was capable of exercising power.

In his broadcast of the 18th June, de Gaulle was quite explicit in that he was rallying only those Frenchmen who were on British Territory (not just the UK it will be noted) at no point does he suggest that anybody leave France.

On the 5th June de Gaulle had been made Under Secretary of State for War.

De Gaulle was prudent enough at this point not to wish to be seen to be undermining the French Government in Bordeaux.

It was the fact that France was in theory still an ally that had prompted the British Cabinet to refuse de Gaulle access to the BBC. The transmission was made possible only by the personal intervention of Churchill himself.

However once the Armistice had been signed on the 22nd May de Gaulle’s tone changed and he appealed to the commanders in the French Empire not to accept defeat but to work with him in creating a force to resist in what de Gaulle foresaw as a global war (Which at that stage it wasn’t, the only two effective belligerents left were the UK and Germany).

A poster was drawn up in July and placed in windows all over London, this was addressed to ALL French people no matter where.

A celebrated document in its own right and often confused by French people of being the 18th June broadcast it can be seen decorating many a public institution in France.

The flame of resistance

Even before his government had officially surrendered, de Gaulle was certain of one thing :
Resistance.

…the flame of French resistance must not go out and will not go out. 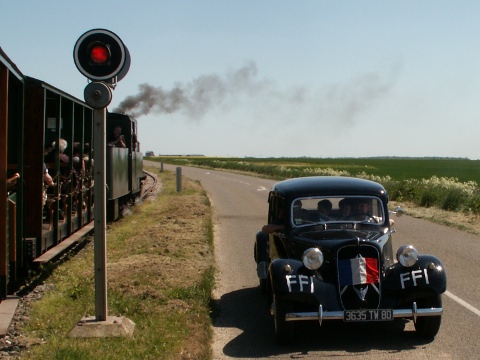 Apart from those military organisations that rallied to de Gaulle, numerous Resistance groups sprang up over France and de Gaulle set about trying to unify them under a single council and bring them under his overall control.

To this end Jean Moulin was sent back to France. He succeeded in his mission but was captured and tortured to death by the Gestapo (Klaus Barbie).

Once the D-Day landings had taken place on 6th June 1944 the idea of resistance was replaced by that of liberation and the various Resistance groups became the Forces Française de l’Intérieure (FFI). Many of these would be incorporated into the Free French Army during the latter stages of the war.