Aubigny-en-Artois is a village approximately 15 kilometres north-west of Arras on the road to St. Pol (D939). From the D939 turn onto the D75 towards the village of Aubigny-en-Artois.

At the Carrefour Supermarket turn right and continue through the village until a left hand junction, turn left and cross the railway line.

Immediately after the railway crossing take the next road on your right: Rue de 22 mai 1940. The Quarry Memorial will be on your left a hundred metres up the hill. 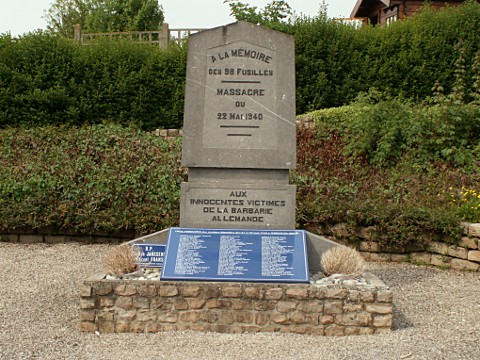 On Tuesday the 21st May 1940 the 2nd Regiment of the 3rd SS Totenkopf Panzer Division arrived in Aubigny from Avesne le Comte where it had been heavily engaged by the British army during their counter attack at Arras.

Aubigny’s population of 900 inhabitants had been swollen by numerous refugees from Belgium and the north of France.

At about 1600 hours the major part of the SS unit had installed itself and perhaps in fury at the beating they had taken at the hands of the Allies began burning numerous buildings within the village as well as opening fire on anything that moved. The Plouvier and Breuvart farms became the scenes of particular atrocities.

The following day the SS began forcing their way into homes to find the sheltering population. At first all went well but they suddenly found themselves opposed by a number of British troops near the railway station who put up a terrific fight.

Allied bombers destroyed the SS anti-aircraft guns and killed a couple of SS near the station.

This SS unit was made up of ex-concentration camp guards and having lost all sense of discipline they rounded up 64 hostages from the local population and executed them in the village quarry.

Having committed this outrage the Germans forced the population over the next two days to clear up the dead and bury them in the quarry. A total of 98 victims were recovered and their names are inscribed on the plaque.

Today the memorial stands in the quarry itself whilst the victims lie in the communal cemetery.

The monument was conceived by Maurice Vanwalleghem, who had managed to escape from the massacre at Plouviez Farm.

Alongside their graves will find a large French Military Plot as well as a CWGC Cemetery containing 2,771 Commonwealth burials of the First World War and seven from the Second World War.

Aubigny is now twinned with Brunehaut in Belgium and a ceremony of remembrance is held each year at the monument to remember those from both nations massacred by the SS. 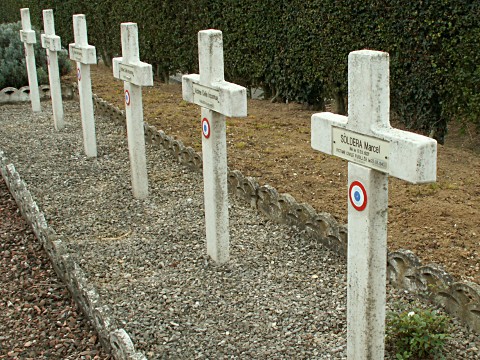