Webmatters : The Battle for France May 1940 - Mont St Eloi 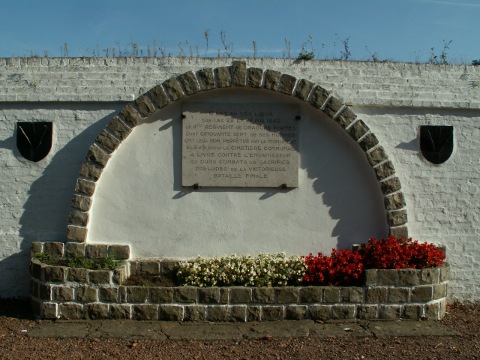 At the beginning of the war the 2e and 3e DLM (2nd and 3rd Light Mechanised Divisions) drove into Belgium as part of the French 1re Armée. The 1re DLM was with the élite 7e Armée composed of the best trained and equipped soldiers that France possessed and was en route for Antwerpen.

Having made the journey northwards the 3e DLM were soon to be forced back by the tidal wave of German armour not only advancing towards them but also (by the 18th May) to their south, as Generals Guderian and Reinhardt pushed their Panzer divisions westwards out of the breakthrough at Sedan.

What exactly was a DLM or Division légère mécanique in the French army ? Whilst it was certainly mechanised it was only light from the point of view of having only two brigades rather than three.

In essence they replaced the role traditionally played by the cavalry: reconnaissance, cover, pursuit. They were not intended to seek out engagements or create a rupture in the enemy’s lines. Tanks in the French army were there to support the infantry and not to act independently, en masse, as was the case in the Wehrmacht.

Each division was made up of a reconnaissance regiment in armoured cars and two brigades: one of two tank regiments (each of four squadrons) and the other of a regiment of motorised dragoons (Dragons portés) who acted as the infantry of the division.

Dragoons were originally mounted infantrymen, riding into action on horses and then dismounting to fight with carbines. However they were as often as not simply used as cavalry. Here it is important to understand that Dragons are tanks whilst Dragons portés are motorised infantry.

With a compliment of artillery and service personnel the division consisted of some 10,000 troops, 3,000 vehicles and 180 tanks.

Apart from the fact that the Panzer Division had about 250 tanks the biggest and perhaps most important difference in the war that was being fought was the fact that unlike their German counterparts the DLM did not have anti-aircraft batteries. The French were also handicapped by a lack of radios for inter-vehicle communication.

The British counter-attack at Arras

On the evening of the 20th May the 4e RDP and 1re DLM arrived at Douai to the north-east of Arras. Fuel was badly needed for the tanks and armoured vehicles and so a tank from the 4e cuirassiers led a convoy of motorcycle dispatch riders and lorries towards St Laurent Blangy.

There they were stopped by a check point from the British garrison, but were allowed to proceed. Fuel was finally found at Achicourt and the dispatch riders left the convoy and continued on to the French HQ in the Rue Baudimont. On their arrival they were greeted by Général Prioux who informed them that the 1re DLM was needed in Arras.

A battle would be launched the following day from the west of the city. If successful it would break through Rommel’s lines and cut off the Panzer units nearer the coast.

By chance at 0500 hours, General Rommel was near Vis en Artois a few kilometres to the east (Where you will find a CWGC WW1 Memorial to the missing). He was waiting for the main body of his 7th Panzers to catch up with his advanced elements. His command party was protected by two tanks which suddenly found themselves assailed by French tanks coming from Vitry. The French gained the upper hand but fortunately for Rommel the French then approached no closer.

Unlike the French Général Giraud, captured on the 18th, Rommel would see out most of the war — eventually falling a victim to Hitler himself.

During the rest of the morning the few French tanks still operational around Arras regrouped ready to support the British attack, which although initially successful lacked both weight and support and was eventually halted on the Doullens Road.

Général Henri Giraud would eventually escape from Germany making his way back to Vichy France. Considered by the Americans as an alternative to de Gaulle he would take command of the Free French Forces in Africa. His lack of political capability would, however, lead to his loss of support and de Gaulle was confirmed as the nation’s champion.

Having beaten back the British assault, elements of the 7th and 5th Panzers moved up on the west of Arras via the Pont du Gy towards Mont St Eloi. Some of the infantry got into the village without difficulty but were then confronted by the soldiers of the 4e RDP and tanks of the 18e Dragons supported by an artillery bombardment.

Leaving the division under severe attack at Farbus (on the other side of Vimy ridge) the 1st Battalion of the 4e RDP had been dispatched to La Targette where they were immediately ordered to retake Mont St Eloi.

Under Capitaine Clavé and supported by a section of Somua tanks from the 18e Dragons they advanced across the valley towards the hill. 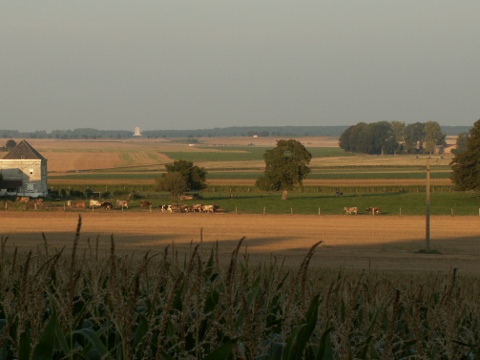 On 9th May 1915 their forebears had been going in the opposite direction having started at Berthonval Farm just below the ruined abbey on Mont St Eloi and with La Targette as the objective in sight.

On a sunny day, almost to the week, twenty five years later, the French suddenly came under fire at that same Berthonval Farm; British anti-tank guns had mistaken them for Germans (the British 17th Brigade were defending the nearby villages of Maroeuil and Etrun).

The French crews opened fire destroying the two guns and knocking out the crews (Who are buried in the communal cemetery alongside the French who died that day). 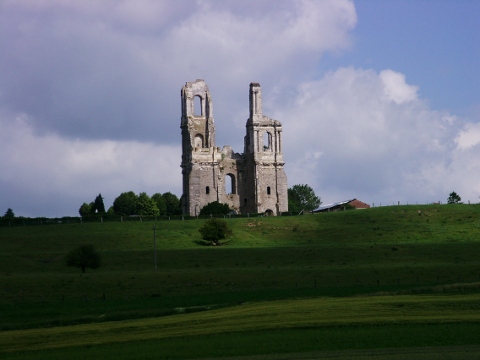 The ruined abbey from the plain

Continuing their way up the hill the French soldiers encountered a group of refugees crossing their field of fire and were forced to pause their assault allowing the civilians to flee the battlefield. As the tanks encircled the village the Dragoons launched their attack hurling grenades into the German lines.

Fighting from house to house the French infantrymen forced their way into the village capturing 130 prisoners, anti-tank guns and material. A mop-up operation of the houses was started and late in the evening this produced further Germans who had been hiding amongst the ruins.

Mont St Eloi was secured but the news from Farbus was not comforting with the 1re DLM having received yet another attack by Stuka dive bombers.

The following morning the French outpost at Mont St Eloi came under an ever increasing assault by Panzer regiments and were eventually forced to give the village up again. The 1st Bn 4e RDP prepared a defensive position at Berthonval Farm whilst their 2nd Bn, which had been moved during the night, defended Carency (The scene of a veritable bloodbath in May 1915) to the north-west.

During the afternoon the Germans descended the hill towards Berthonval Farm where they were met and contained by the solid defence of the French who attempted a counter attack. 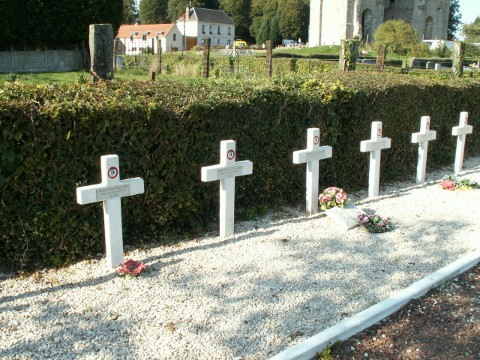 Graves of the 4e RDP in the cemetery

The French however were almost out of munitions and had suffered heavy casualties in both men and vehicles. The skies were devoid of Allied aircraft and the Stukas were able to harass the French with impunity.

As the afternoon progressed the troops of the 5th Panzer Division re-commenced their assault in the face of a number of counter-attacks by the 4e RDP. At Carency the Germans ran into the 2nd Bn 4e RDP who defended the village with as much resolution as the Germans had in 1915.

Here the French infantry were supported by their 4e Cuirassiers and British tanks from the RTR but although they stood their ground for as long as they could there was little that they could do against the ever encircling Germans.

Despite the odds; at midnight on the 23rd May the 4e RDP were still holding Berthonval Farm.

During the night the order was given to retire. For many of the French and British who were fighting alongside them (17th and 151st Brigades) the road to Dunkerque had begun. 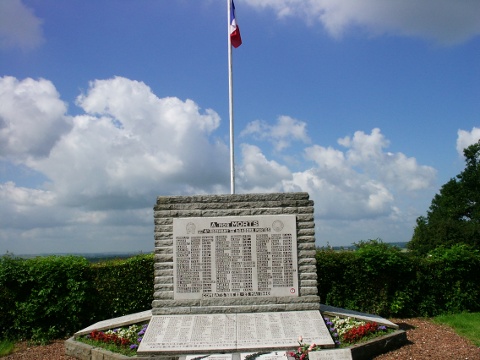 The monument to the 4e RDP in the cemetery

Fifty-seven of the 4e Régiments de dragons portés were killed in the struggle for Mont St Eloi and they are commemorated by a monument in the communal cemetery next to the Abbey.

There is another monument to their stand, opposite the village green.

At Maroeuil in the communal cemetery you will find 35 soldiers of the 2nd Bn Northamptonshire Regiment who died fighting for the village on the 23rd May 1940. Immediately next to it is a large French Military Cemetery from the battles of 1915 in which you will find the two sons of Général Pouydraguin.