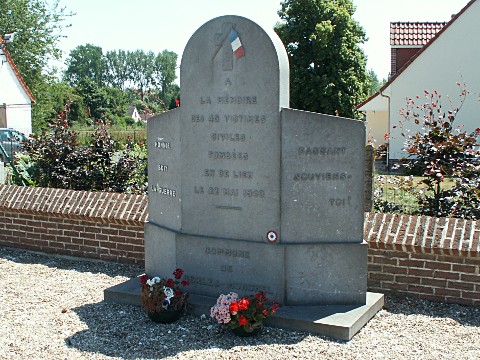 Commanded by SS Obergruppenführer Theodor Eicke this motorised division was made up of Standarte (Regiments) who had been guarding the concentration camps:

Eicke had personally pressed the SS with the idea that his troops be trained and equipped to fight.

On 16th October 1939 Hitler finally gave permission for the first three regiments plus the SS Heimwehr Danzig to be grouped together as a Waffen-SS Division.

At the time of the invasion of France on the 10th May the division was part of von Rundstedt’s reserve until attached to General Rommel’s 7th Panzer Division on the 18th May.

On the 20th May it passed via Bourlon, Inchy-en-Artois and Mercatel.

At Mercatel it executed six civilians; shot a further five civilians and burned down twenty-four farms at Simencourt; before proceeding to Hermaville where it executed four civilians (one of whom was a 78 year old lady in her bed) and set fire to houses and farms.

Arriving on the southern outskirts of Arras the Division found itself heavily engaged during the Allied counter attack of the 21st May, during which some of its troops showed a lack of ardour and it suffered numerous casualties from British and French tanks.

As they moved through the Pont-du-Gy on the Arras-St Pol Road they shot a number of others who are commemorated by an almost hidden plaque on the gable wall of the last building on the right travelling towards St Pol.

Setting up its HQ at Aubigny-en-Artois it proceeded to exact its revenge on the local population by executing 94 people.

A matter of kilometres away thirty more civilians were shot at Berles-Monchel.

In the days that followed the Division (now attached to the XVI Panzercorps) took part in the battles around Béthune.

At Le Paradis near Lestrem the Division was responsible for the massacre on the 27th May of 97 out of 99 British POW’s from the Royal Norfolk Regiment.

The two soldiers who survived bore witness at the trial of the officer concerned after the war.

Later during the war the Division would fight with ferocious tenacity on the Eastern Front suffering almost complete obliteration.

In the final retreat it managed to turn about and surrendered to the Americans — who promptly handed them back to the Soviets. Few would survive.