The Memorial des Alliées or Operation Dynamo Memorial is situated on the Digues des Alliées on the sea front at Dunkerque though almost into the neighbouring town of Malo les Bains.

From the town centre follow the signs for Malo les Bains along the Avenue des Bains. Having crossed the canal turn left on to the Allée Fénélon which will take you out to the front. 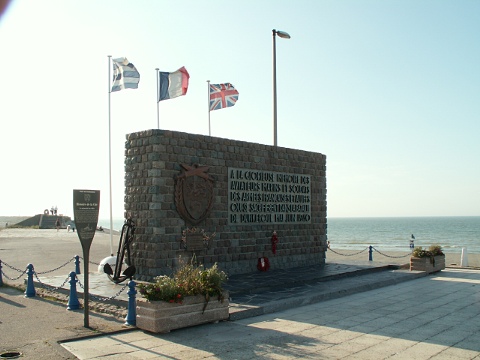 The memorial is directly in front of you as you are forced to turn right. There is some parking available.

By the 26th May 1940 it was painfully obvious to Lord Gort VC commanding the BEF that the only plausible solution to the dilemma that faced his encircled troops was to try and evacuate as many as possible. The only port available was Dunkerque.

That evening just before 1900 hours, Vice Admiral Sir Bertram Ramsay in Dover sent the signal : Operation Dynamo is to commence.

On the 27th May the British and French within the Dunkerque pocket began a withdrawal with the British forming a line passing through Cassel, Hazebrouck and St Venant in the north and along the canals from Béthune to Gravelines — much of the final defensive line was held (and would be held to the end) by French troops.

The town and port of Dunkerque had been bombed by the Luftwaffe, water was no longer available and the docking facilities hung in a precarious balance between being usable or not.

On the 29th May the French finally accepted that evacuation was a possibility. In the intervening three days 70,000 British troops had already been taken out of Dunkerque. Off the coast French boats had been available to assist the Royal Navy and much more could have been done.

By the 30th May the British troops had been pushed back almost to the coast and the end was nigh. A call was made to all boats of whatever capacity to come to the aid of the Royal Navy. Although we have the vision of the evacuation being made via the beaches in fact the majority of men were taken out from Dunkerque harbour.

As the Dunkerque bridgehead was within the jurisdiction of the French fleet the co-ordination of the evacuation was ensured through Amiral Abrial and the decision was taken that evacuation would now continue on an equal ratio between French and British soldiers.

Fifteen French warships arrived at the harbour and began working alongside the British flotilla — it would be unfair to all the civilians who so gallantly took part in Operation Dynamo to use the phrase: Royal Navy.

That evening (The 31st May) Lord Gort and his staff sailed for England — their French counterparts remaining at Dunkerque. By then 194,620 British and French troops had been successfully transferred to England — a figure far beyond the hopes of the most rampant optimists.

The new British commander on the spot; General Alexander conferred with Amiral Abrial and it was agreed that the British Army would hold the exterior defences for a further 24 hours at which point they would pull back through a French defensive line.

Although he did not have a great deal of confidence in the French ability to defend their position, General Alexander didn’t complain when the French hung on for 48 hours allowing a further 10,000 British and 70,000 French troops to be saved.

As day broke on the 3rd of June the British had departed, only the remaining French soldiers fighting from position to position, and from house to house trying to hold back the Germans for as long as possible remained. That night the final evacuations began but it proved impossible to lift all of the remaining Frenchmen — about 40,000 or so having to be left behind at the harbour.

243 of the small boats were sunk during the operation. 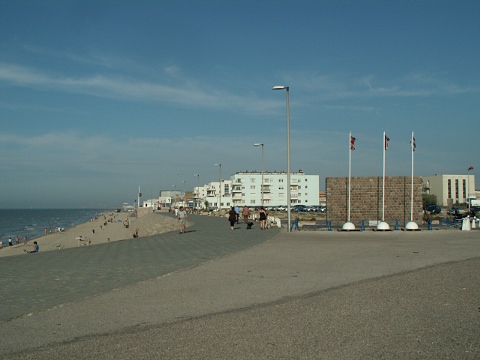 The Memorial and beach

Created by the Architect Laprade and the sculptor Ringot, the memorial to the Battle of Flanders was created in 1962 using the cobblestones from one of the quay’s of Dunkerque.

It recalls the courage of the Allied soldiers whose sacrifice held the German advance long enough to embark the British and French troops.