Webmatters : The Pennsylvania Fountain at Belleau

Follow this road for seven kilometres and you will arrive at Belleau. Immediately after the 26th Division church turn right. About 100 metres down the road into the village of Belleau you will see the fountain on your right.

It is very easy to miss as it almost forms part of the wall of the house. 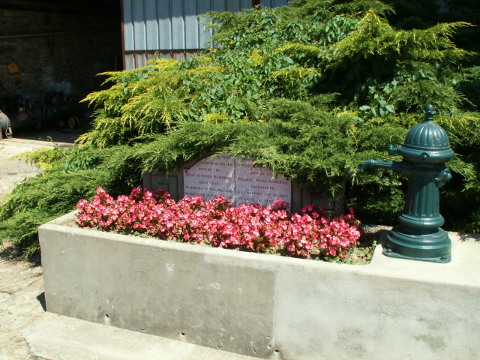 The 5th Regiment of Marines were formed on 8th June 1917 in Philadelphia, Pennsylvania. Initially assigned to the 1st US Division on their arrival in France they were transferred to the 2nd Division in October 1917.

Together with the 6th Regiment of Marines they formed the 4th Brigade, 2nd US Division.

Committed to the seizure of Belleau Wood on 6th June 1918 they found themselves in a hard won fight over a number of weeks suffering heavy casualties.

It should be stressed that the Marines never entered the village of Belleau. The village was taken on 18th July 1918 by the infantry of the 26th Division (which explains the presence of their church at the entrance to the village).

The pump was the original water source for the village and after the war was transformed into a memorial to the 5th Marines who had died taking the wood.

The plaque carries the inscription: