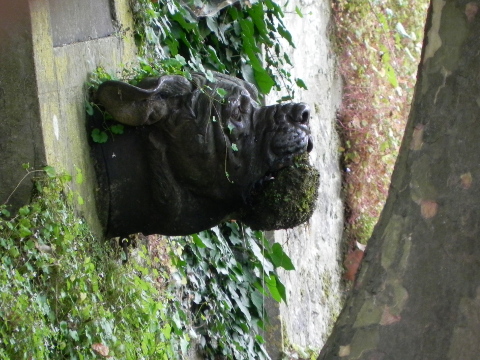 During the battle for Belleau Wood the Germans supposedly nicknamed the troops up against them The Hounds of Hell. That there happened to be a bulldog fountain in the ancient château grounds is for them fortuitous hazard—the fountain was there long before the Marines ever set foot on the soil of France.

The Marines were never able (or required) to enter the village of Belleau; the village being taken on 18th July 1918 by the infantry of the 26th Division (which explains the presence of their church at the entrance to the village).

None of this has not stopped all sorts of myths accruing around the bulldog and many a Marine has drunk its waters believing that it will add years to his life (or certainly believing that if he missed the opportunity it certainly wouldn’t enhance his longevity).

The bulldog nevertheless became the Corps mascot and at their base at Quantico, Virginia, the Marines obtained an English bulldog who was formally enlisted during a ceremony on 14th October 1922. Unlike his human counterparts, Private Jiggs, was signed up for life !

The château is private property but a key to gain access can be had from the Superintendent’s House in the Aisne Marne American Cemetery.

From the cemetery go across the road into the village of Belleau and then follow it (passing the Pennsylvania Fountain on your right). It will then bend left. At the next junction you will have the château wall in front of you. The entrance is just to the right. 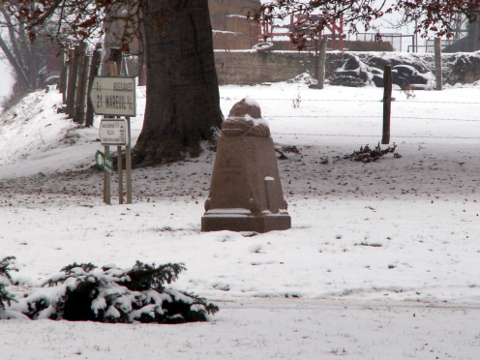 Immediately in front of the Aisne Marne American Cemetery you will see this demarcation stone. One of many set up across France and Belgium.

Paul Moreau-Vauthier was a noted French sculptor who first came to fame in 1900. He served with the French Marines (Marins-Fusillers) during the war, fighting at Verdun.

In the aftermath of the hostilities he had the inspirational idea of marking the front along the line as it was at the end of the 2nd Battle of the Marne—the closest that the Germans came to Paris in their 1918 offensive.

They are all just over a metre high and created from granite. Most, as in this case, have the French Adrian (1915) helmet surmounting a laurel crown, others carry either the British or Belgian helmet—depending on the area. On the sides you will see soldiers accoutrements such as a water bottle or grenades.

The name of the location is engraved on the front and there is also an inscription :

Here the invader was brought to a standstill