Webmatters : The US 26th Division Church at Belleau

Follow this road for seven kilometres and you will arrive at Belleau. The church is the first building that you will see on your right. 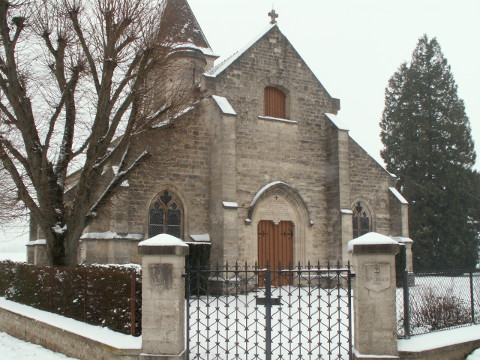 Although the 2nd US Division took Belleau Wood in June 1918, famously using its USMC Brigade, the Division never reached the village of Belleau.

When Major General Clarence Edwards asked about for suggestions for a Divisional nickname the idea of the Yankee Division was put forward and accepted. With the troops coming from Massachusetts, Connecticut, Rhode Island, New Hampshire, Vermont, and Maine it seemed a more than fitting title.

Although the word has come to suggest all Americans (or at least in particular the Unionists of the Civil War) the term originally meant those who came specifically from New England.

Between the 5th and 8th July 1918 the Division relieved the 2nd US Division in the line Vaux-Bouresches-Bois de Belleau-Bussiares. Although the German offensive in this sector had run its course this did not mean an end to the shelling and local attacks.

The Division suffered greatly from gas shelling and, on the 12th and 13th July, the Germans attempted to take Vaux (held by the 101st Regiment). The assault was beaten off and a few days later on 18th July the Division took a leading role in the great French counter attack at Soissons.

The villages of Belleau, Torcy and Givy all fell to the Division that day.

Belleau’s church which was originally in the centre of the village, was destroyed by American artillery prior to the final assault on the village by the 26th Division. Having liberated Belleau, General Edwards told villagers that he would ensure that the church was rebuilt.

Money was raised by the Division’s veterans and on 10th October 1929 the new church was dedicated in a ceremony attended by Brigadier General John Sherburne. Within are commemorative plaques and stained glass windows honouring those from the Division who died in France. It is the only memorial to the Division.

The plaque over the door carries the inscription:

This church, destroyed during the world war, has been reconstructed by the veterans of the 26th Division of the American Expeditionary Force in memory of their comrades who fell on the soil of France fighting for a communal case.

In 2011 the Veterans’ Association were again raising funds to ensure that vital repair work (€40,000) on the roof was carried out.

They key can be obtained from the superintendent’s house in the cemetery.