The monument is situated within the proximity of the Wellington Quarry at the junction of the Avenue Fernand Lobbedez and Rue du Temple. 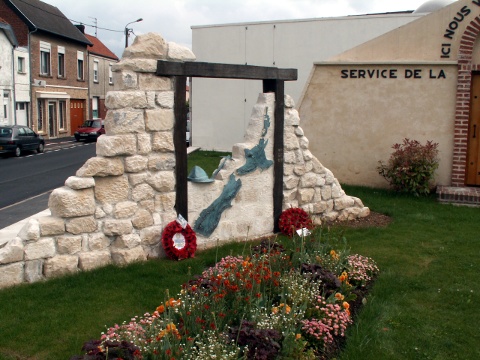 The most convenient method of visiting is to use the car park at the Quarry which is well sign posted throughout the town – Carrière Wellington. This is on the road towards Bapaume and just behind the Leclerc Hypermarché. Turn left immediately after the Leclerc Service Station.

Alternatively from the Arras-Cambrai Road turn down the Rue du Temple situated just after/before the railway bridge at a set of traffic lights (Look for the Peugeot dealer). At the bottom of the street turn right and then immediately right again into the Quarry car park.

On foot, come out of the car park exit (furthest from the Leclerc Hypermarché) turn left and walk up to the traffic lights where you will find cafés and bank machines.

You will find the monument in the small park on your left surrounded by flag poles.

The New Zealand Tunnelling Company was recruited in 1915 from the ranks of the coal miners of the South Island and the Gold miners of Waihi and Karangahake on North Island. They arrived in France in March 1916 under the command of a 33 year old Boer War veteran: Major John Duigan.

He rather famously complained that his life was not made any easier by the fact that he had seventeen Trade Union secretaries within his unit. Discipline appears to have been a mediated affair.

The Company was not actually attached to the NZ Division and were the first New Zealanders to reach the Western Front having arrived in France some months before the Infantry.

Their initial role was counter-mining any German diggings to the north-east of Arras but in November 1916 they arrived in Arras and set about creating what would prove to be their own monument: the tunnels under the town.

Helped by 140 men of the British 184th Royal Engineers Tunnelling Company and by 43 members of the NZ (Maori) Pioneer Battalion they set about linking the various medieval underground quarries by tunnelling from one to the other.

As the Battle of Arras approached in April 1917 the tunnels were pushed further out towards the German lines.

They would prove of use again in 1918 during the German Spring offensive and the final phases of the war when they would be used by Canadian troops – who found them a miserable experience.

They would then be used once more as a shelter by the local population during the Second World War before being closed off and remaining lost until the Nineties.

When the Kiwis left in July 1918 they left behind 41 of their number killed and had suffered a further 151 injured. Twenty-one of them are buried in the Faubourg d’Amiens Cemetery near the citadel. The site also contains the Arras Memorial to the Missing which includes a number of Tunnellers.

There are more burials at Duisans British Cemetery (To the west of Arras). 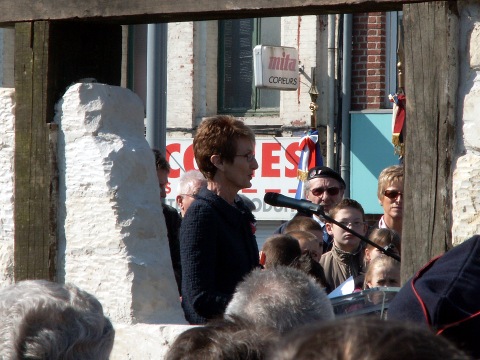 The Ambassador: HE Sarah Dennis at the inauguration

Inaugurated in April 2007 for the 90th Anniversary of the Battle of Arras this monument is within a hundred metres of the Wellington Quarry site. 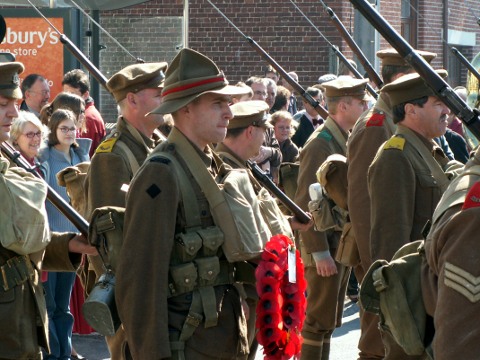 Many of the Tunnellers came from Waihi and the town has made certain that its soldiers have not been forgotten. Look up their Heritage Page.

In 2012 a small party of Tunnellers’ descendants made a pilgrimage to the Western Front to honour their ancestors. Amongst those remembered was the first New Zealand soldier to die in Europe.