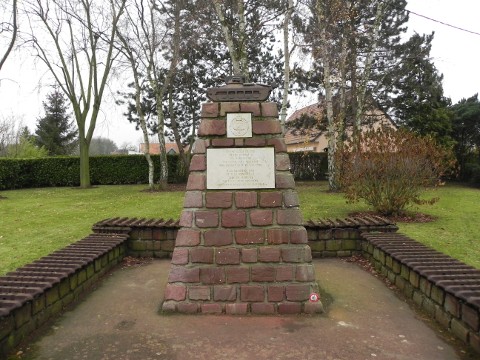 The monument sits just opposite the Mairie of Beaurains (The Town Hall). From Arras town centre follow the signs for Bapaume (On which you will also find the Wellington Quarry).

As you enter Beaurains (and you may not even realise you have left Arras as the entire area is urban) you will come to traffic lights and a sign directing you left towards Neuville Vitasse. Turn left into the Rue Jean Jaurès.

At the next major intersection you will see the large building of the Mairie on your right. There are a few parking spaces nearby.

The monument is in a small garden in the Rue Victor Hugo immediately on the right of the Mairie.

In 1940 Arras was the Headquarters of the British Expeditionary Force (BEF) in France.

On the 10th May 1940 Germany invaded France and within ten days had reached the coast at St Valery. Their narrow corridor across France from the Ardennes to the sea was open to rupture if the Germans could not secure the entire route.

The plan by the local commander Major General Martel was simple. The 151st Brigade would sweep from the west of Arras coming around and underneath it as far as the Cojeul river on the old 1917 battlefield. That done, the 13th Brigade would move southwards from its position on the Scarpe to the east of Arras to join up with the 151st Brigade.

Both the 4th and 7th Royal Tank Regiment were involved in this battle which, although it failed in its intended mission, did cause Rommel to pause and forced the Germans to regroup and rethink their supply lines before continuing on in their push towards the encircled Allies at Dunkerque. 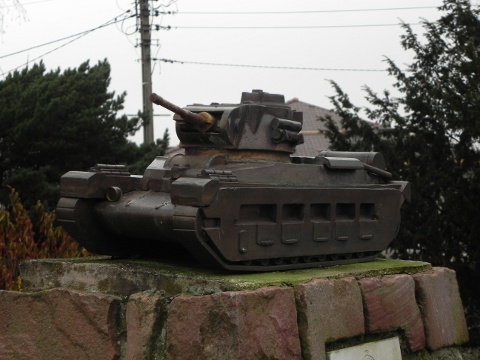 The memorial was sponsored by Souvenir Français and the people of Beaurains.

The 2.5 metre high pyramid is made from old cobble stones. On the top is a bronze model of a Matilda Mk II tank whilst surrounding the monument on three sides is a low wall covered with tank tracks.

The monument was inaugurated on the 22nd May 1983 by Major General Dixon the Colonel of the Royal Tank Regiment. It is dedicated:

To the glory and memory of all members of the royal tank regiment who fought here in may 1940.