Pozières is a village some 6 kilometres north-east of Albert. The Tank Corps Memorial is on the far side of the village on the north side of the main road (D929) from Albert to Bapaume.

The radio mast makes the position an easily identifiable landmark

There is a parking alongside the radio mast. Immediately opposite is the Pozières Mill Memorial to the 2nd Australian Division whose flag poles will also help you identify the location.

The mill site is hallowed ground to Australians who suffered dreadful casualties in its taking. From the mound superb views can be had across the northern sector of the Somme battlefield. 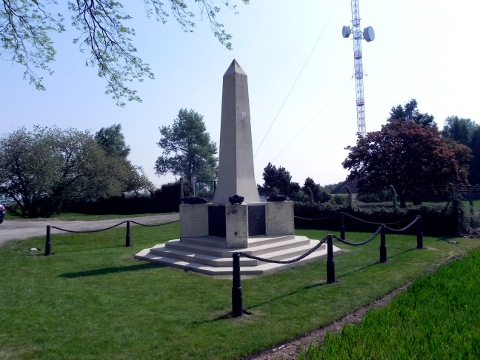 It was from near this point that the tank was first used on the 15th September 1916 — actually attacking Flers a few kilometres away immediately behind the monument.

At the time the six operational tank companies were grouped as the Heavy Branch of the Machine Gun Corps (which you will notice on their gravestones).

Other companies would be formed and these would be increased in size to battalions, which were originally named by a letter (A Battalion etc.). By the end of the war however the battalions were numbered.

Tanks of each battalion bore names beginning with that letter.

On 28th July 1917 the HBMGC was turned into its own formation : The Tank Corps.

The Tank Corps Memorial is for all the men from the Corps who fell during the war and not simply those that died in their first battle at Flers-Courcelette on 15th September.

Probably used before they should have been they were very slow and prone to mechanical failure. Only 32 of the intended 50 tanks made it into battle on that historic first day. Tactically they were poorly used and a golden opportunity was missed.

It would take time for a better understanding to evolve on how to use tanks in combat. Initially they were used piecemeal and without direct infantry support.

Considering their later reliance on tanks in the Second World War it is remarkable that the Germans showed little interest in the new invention. It would also be with some irony that a French POW captured at Verdun would later write a number of articles about how tanks should be organised and used as an offensive arm. His ideas were subsequently taken up by the Wehrmacht rather than his own army.
Colonel Charles de Gaulle would be a lone voice crying in the wilderness in the events leading up to May 1940.

The Tank Corps Memorial at Pozières 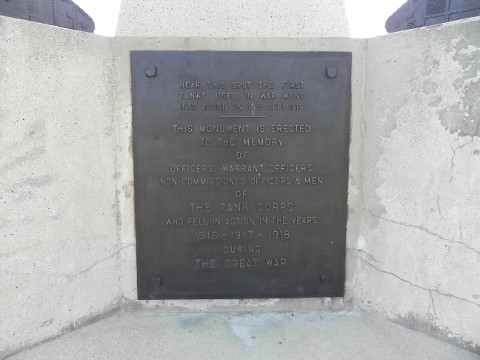 The monument takes the form of an obelisk around which are four pedestals surmounted by a finely detailed model of a tank.

You will notice that the railing around the obelisk is made up of six pounder barrels and driving chains. 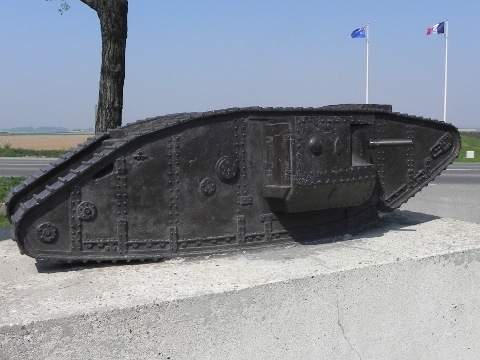 The Mk I Tank was the first type of Tank to be used as a fighting vehicle anywhere in the world.

There are various versions as to how the word Tank came to be used but in essence they all boil down to the idea of suggesting that they were water-tanks in order to deceive spies.

Initially they were made in more or less even numbers but it was then realised that there wasn’t a great deal for them to fire a 6 pounder gun at.

Female tanks became more prevalent until the Germans started to introduce their own machines. 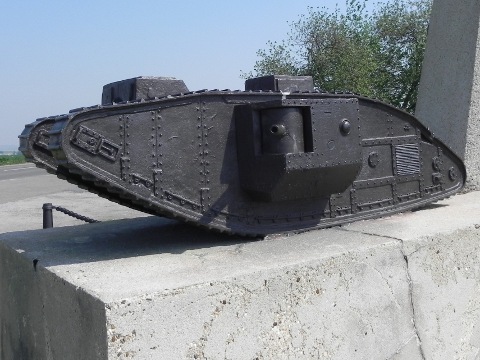 Like the Mk I the Mark V tank had a crew of 8 men. Improved power meant that it could trundle along at the amazing speed of 5 kph for 35 kilometres. If the engine didn’t give out ! 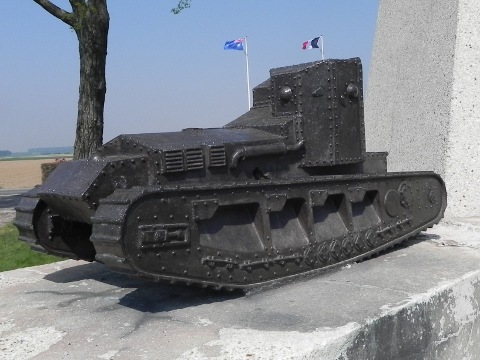 The Whippet only weighed 18 tons, which meant that it could manage nearly double the speed of its heavier counterpart: 9 kph.

It had a crew of three or four men who could operate machine guns from the fixed turret – it did not revolve as you would expect from modern tanks.

In fact the first tank with a revolving turret was a French invention — the Renault FT-17, used en masse later in the war 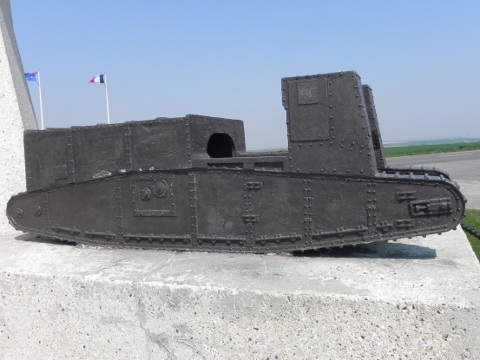 This is the Worlds First Self Propelled Gun. The Gun Carrier Mk 1. It lacks the Gun, as these vehicles were mainly used for the transport of supplies, in which case the gun — a standard artillery
piece — was simply winched out. (My thanks to Peter Kempf for enlightening me.)

Other memorials in Pozières