Pozières is a village some 6 kilometres north-east of Albert. The KRRC Cross is on the edge of the village on the south side of the main road (D929) from Albert to Bapaume.

As you approach Pozières from Albert you will see the obelisk and signs for the 1st Australian Division on your left. Just before that junction to the left you will see this grey cross on your right.

There is space for a vehicle to park.

Many of the battalions of the King’s Royal Rifle Corps fought throughout the Battle of the Somme notably in High Wood and at Delville Wood.

The KRRC was in fact a regiment made up of a number of battalions and not a Corps. The same can also be said for its light infantry cousin, The Rifle Brigade – also a regiment.

A similar cross can be found at Hooge in Belgium. 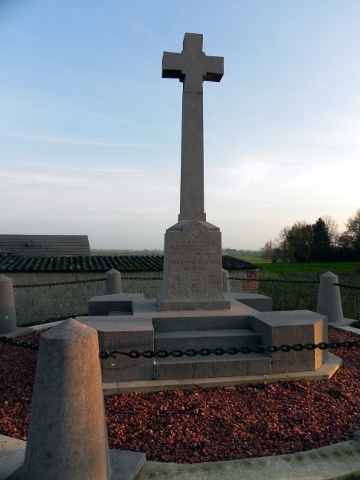 The cross is the regimental memorial in France and is dedicated :

To the memory of officers and men who gave their lives on the battlefields of France fighting in the cause of liberty and justice.