Within days of the first use of chlorine gas, Allied chemists were explaining that a simple gauze pad soaked in bicarbonate of soda (or if not available, urine or water) would filter out most of the harmful effects.

It was also realised that as chlorine gas was heavier than air those who succumbed and fell into the trench would receive a greater exposure to its effects than those who stayed upright and fought on as the gas passed over them.

The French soldiers without any protection had been on a hiding to nothing on the 22nd April. Those that fled ran with the gas and became increasingly asphyxiated, whilst those who remained at their posts were rendered incapable of defending themselves and were easily dealt with by the German infantry following behind the gas-cloud.

The first British gas helmets relied on photographers’ Hypo fixing solution. The first official Smoke Hoods were being delivered to the front line by May 1915.

Of course both sides realised that not only was retaliation going to be the order of the day, but that other gases could well be used including phosgene and hydrogen cyanide.

Gas masks were therefore impregnated with chemicals to counter these gases as well. The British introduced the P-Helmet which consisted of a fabric hood with two glass eyepieces to see through. A tube was fitted so that the soldier could exhale carbon dioxide without it coming into contact and reacting with the chemicals that were supposed to be protecting him.

The French came up with similar designs and based theirs partly on captured German equipment. They also thought of bringing up oxygen plants used in the mining industry to help protect the more important command posts.

No matter how efficient the gas masks became it is still exceedingly difficult to speak to somebody on a telephone whilst wearing one. Giving orders in the field was difficult because the hoods muffled the voice and rendered listening difficult.

The German gas attack at Ieper gave the green light to the other combatants to develop their own chemical warfare units. The Hague Conference of 1899 had been neatly side stepped. Tear gas was not asphyxiating or toxic as such, and whilst chlorine was, it had not been put into projectiles (in other words shells). Instead it had been simply released from cylinders.

The fact that the subject had come up at the conference meant that all the belligerents had already considered chemical warfare and Britain and France were no exception.

Within months of the attack the British Army had founded four Special (Gas) Companies of the Royal Engineers under Major Charles Foulkes (the 186th, 187th, 188th and 189th).

In September 1915 the French wished to continue their efforts to take Vimy Ridge and asked Sir John French in command of the BEF to launch an attack on the northern side of the ridge at Loos.

The battle was given to the First Army under Sir Douglas Haig and he, having surveyed the flat open terrain agreed to the plan on the condition that gas was deployed.

On the 25th September 1915 the British released as much chlorine against the Germans as they had used five months previously. Gas warfare was now de rigeur on the battlefield.

The French were not averse to using chlorine but only had access to limited supplies. They were also concerned about the fact that gas drifting about to the rear of the enemy lines might harm the civilian population — their own kith and kin.

The French concentrated on how to deliver gas by shell rather than the vagaries of gas clouds. They also worked on two toxic gases — phosgene (carbon oxychloride) and a form of hydrogen cyanide called Vincennite.

Although the British and Germans considered that Vincennite under delivered, it remained a staple part of the French chemical war.

One British chemist; Joseph Barcroft, undertook a period of controlled exposure to the gas in a French laboratory. He was accompanied by a dog. The dosage was high enough to be unattainable on the field of combat. The dog died but the human chemist walked out unscathed. 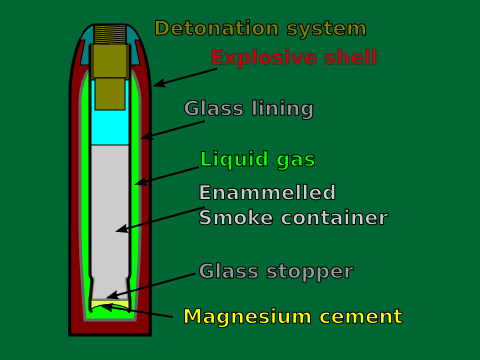 An advantage to using shells to deliver the gas was the ability to calculate how much gas was being delivered to a given location. It would be possible to pinpoint a target and saturate it.

There were however obstacles to overcome. So that the gunners could see where their rounds were going a smoke-gas charge was added to the contents. This presented a problem because these chemicals sometimes reacted with the liquid gas.

If they weren’t reacting with each other the trials showed that the chemicals certainly reacted with the shell casing.

The French therefore tried placing the two liquids inside separate lead containers within the shell. Trials showed that the containers would often be broken by the violence of the shell leaving the canon. The lead would fall to the rear of the shell and offset its trajectory.

Finally a method was found of coating the inside of the shell with glass and depositing a sealed enamel covered tube containing the smoke element within. In this way all the chemicals were kept apart and the interior of the shell protected.

The Germans had already used a phosgene/chlorine mix against the British at Ypres in October 1915 and this was infinitely more deadly than using chlorine alone.

That attack was a gas cloud of 180 tons but when the French started using phosgene at Verdun in March 1916 it was carried in shells. The Hague conference had, by now, gone out the window.

Retaliation also meant; new gas masks, and by the end of 1915 the Germans had introduced their rubber mask — Gummismaske. This worked on a system of changeable filters and used wood charcoal as one of its ingredients (something the British could not obtain in large quantities).

Once it was realised that hexamine would counteract phosgene this was added to the British P-Helmets which were now designated PH-Helmets.

Both sides captured and examined their opponents gas masks to find weaknesses. As they all worked on a filtration system it did not take a genius to calculate that if exposure to a gas could be maintained then the respirator would eventually cease to function properly.

Better still, if you mixed the gases you could cause the enemy to start coughing or sneezing which would stop him fitting his mask properly — thus exposing him to something more deadly.

The British would finally dispense with their PH-Helmets in favour of box respirators — which were much less constricting to the wearer.

The French M2 face mask was produced by the million whilst special respirators (the Tissot) were designed for use by men in forward positions such as machine gunners.

Animals were far from being exempt from the effects of this chemical war. Gas masks for horses and donkeys were designed to protect the almost universal method of transporting the very canon that were firing the noxious salvoes.

Dogs were the ultimate sufferers as they were the chemists’ lab rats. The French gassed 16,000 dogs in the course of their research and one presumes that the other nations were not far behind.