In 1917 the Germans reconsidered a mixture of ethelyne and sulphur chloride which they named as LOST (after its two proposers: Lommel and Steinkopf) and marked with a yellow cross. It had a faint smell of mustard and would become infamous by both its smell and its first place of usage — Ypres.

The effects were not immediately noticeable.

The secret of this gas is that it is persistent and a vesicant. It remains as an oily dew on everything it touches and then slowly burns its way through cloth and human tissue.

If you have ever been badly sunburnt at the beach you can appreciate how
you didn’t know until hours later that you had been caught.

Although the exposed British soldiers continued to fight for a while, within 24 hours they started to suffer with severe skin burns. If it got into the eyes temporary blindness would occur.

As it lingered on the ground it was possible to pick it up on the boots and then walk it into shelters — eventually gassing the occupants.

This was the most feared gas of them all despite the fact that phosgene was ultimately the deadlier of the two gases.

For the most part the British — who used more gas than the French — stuck with the gas cloud rather than fiddling with artillery shells.

They did however come up with an incredibly simple method of launching large amounts of gas onto the enemy locations.

Captain William Livens DSO MC was in charge of Z Company Royal Engineers and conducting research into a British equivalent of the flame-thrower — which made its début on the Somme battlefield in 1916.

He devised a simple mortar device which allowed a barrel of oil to be lobbed into the enemy trench. A giant Molotov cocktail in effect.

In comparing the gas cloud with a delivery by artillery it could be seen that the gas cloud provided a far higher concentration of the gas than could be achieved by firing artillery shells. The shells however were more accurate and not so susceptible to the foibles of the wind.

Having succeeded in hurling barrels of oil across no man’s land, Livens put forward the idea of combining the advantages of the gas cloud with artillery shells. Instead of opening a cylinder of gas in our trenches and hoping the wind would do the rest; lob the cylinder into the enemy trench and open it there.

This would also mean that instead of having to persist with a bombardment of gas shells (to maintain the dosage) the required amount could be delivered in one fell swoop and was, therefore, all the more likely to catch the enemy unaware.

The Livens Projector was a single shot launcher, but was so simple to make (and more to the point: cheap) that thousands could be deployed.

It was created in a variety of sizes according to just how far it was intended to launch the gas cylinder and modifications occurred but each followed the same simple system of deployment.

The projectors would be embedded into the ground at an angle of 45 degrees along the entire section of the front to be affected. If the deployment area was behind the British lines then a safety zone was created to ensure that drop shorts would not fall on Allied soldiers. 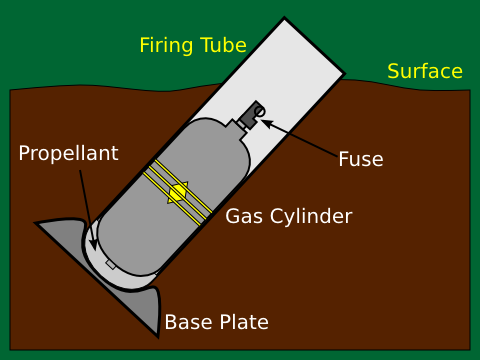 Each projector was loaded with a cylinder, containing about 14 kg of the chosen gas, which would be launched by an electrical charge. On arriving at the target the cylinder would explode dispensing the gas.

In order to help protect the men of the Special Companies deploying the projectors, a Large Box Respirator, was manufactured. Whilst it was too big and awkward for general issue its success provided the impulse behind the creation of the Small Box Respirator which had replaced the infantryman’s old gas helmets by the beginning of 1917.