From Ieper take the N 369 in the direction of Diksmuide. On reaching the centre of the town turn left onto the N35 (towards Veurne). As you cross the river Ijzer, you will see the IJzertor Tower on your left. 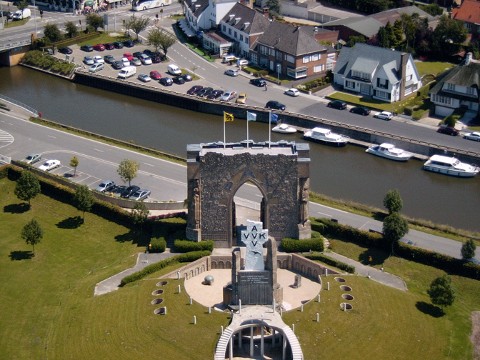 The entrance gate and crypt from the top of the IJzertor

The subject of place names and spellings is a problem at times in modern day Flanders. Ypres has become Ieper, Dixmude is now Diksmuide and for Lille you need to be looking for Rijsel on road panels.

This is actually quite a modern thing, for what most visitors may not be fully aware of, is that the emergence of Flanders and Dutch as a language and culture only occurred after the First World War.

If I understand things correctly : today the language is officially Dutch (or at least the version as spoken by the Belgians) as opposed to Flemish (Vlaams). However, a hundred years ago, the ordinary folk in the countryside would have been much closer to Flemish. The same goes for the north of France where, today, there is a re-emergence of the local dialects over correct French.

Without wishing to embroil myself too much in politics which I don’t fully understand, but coming from Northern Ireland I can appreciate, the basic history is as follows.

In 1830 a revolution took place in the southern half of the Netherlands led by French speaking activists searching for independence. This was formally declared at the Treaty of London in 1839 when Belgium was recognised as an independent state and her neutrality guaranteed by the major nations of Europe including Britain, France, Russia, Germany and (at last) the Netherlands.

For the Flemish speaking members of the new nation this was thought to be the chance to see a rebirth of their culture and language which had been suppressed for so long under previous governments.

However, with a majority of French speaking leaders this simply never happened, and whilst concessions were made, the importance of being able to speak French in order to get on in the Army or deal with Government made life nigh on impossible for the Flemings.

The Belgian Army in particular was somewhat racist (I suppose we would say these days) with most of the ordinary soldiers being Flemings and the officer class almost exclusively French speaking.

When the French speaking Military command attempted to communicate with the local Drainage Engineer in regard to flooding the polders, they were blessed with having an officer who actually spoke Flemish. That ability helped save the Allies from being defeated in October 1914. 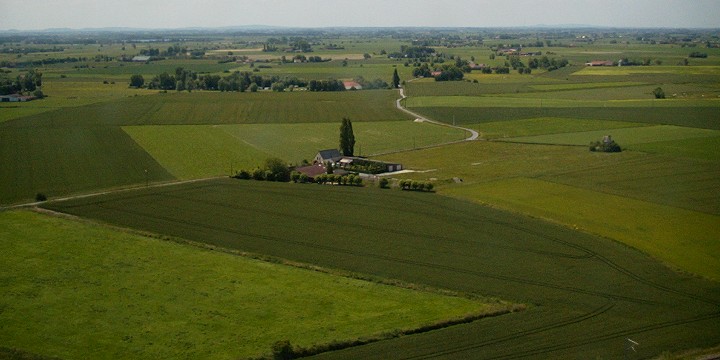 Looking out across the countryside

Flanders is all that remains in Belgian hands

With the invasion by the Germans in 1914 and the subsequent setting up of trenches along the western front, the reality for Belgians was that it was only this tiny salient around Ieper — in Flemish speaking Flanders — that was still free.

To secure most of the final few kilometres of the Allied left, King Albert I had ordered the flooding of the polders from Nieuwpoort, but here at Diksmuide that flooding began to peter out and the line would once again have to be defended, in places such as the Dodengang Trenches not far from here along the banks of the IJzer.

More Belgians would die in this sector than the entire population of the town before the war.

King Albert was openly addressed by his soldiers, but at a time when Russia was in political turmoil and militant activists seemed to be everywhere (helped along needless to say by the Germans who controlled the rest of Flanders) the King felt that the time was just not right. First and foremost he had to save Belgium. Nationalistic rights would have to wait — and they would have to wait as things transpired until after he was dead.

To add, perhaps, insult to injury, Flemish soldiers who had been killed were given a headstone bearing the French inscription:

The feeling grew amongst the rank and file that it was time to have something different, something a little more Flemish.

An artist, born in Brugge but of Irish extraction by the name of Joe English designed a cross, somewhat Celtic in origin with the letters AVV-VVK combined in the centre.

All for Flanders, Flanders for Christ

The headstones were used, but were regarded by the authorities as potentially dangerous and following the war hundreds were smashed.

English himself would be killed on the 31st October 1918 not far from here and groups of like minded Flemings started to meet here at Diksmuide in remembrance.

In 1930, Belgium’s centenary year, a fifty metre tower was erected at Diksmuide to commemorate the Flemings who had died. 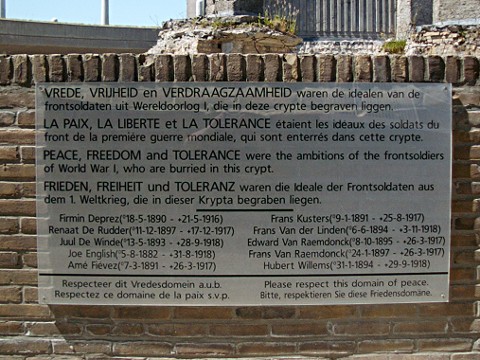 The entrance gate and crypt from the top of the IJzertor

In a crypt were placed a number of significant soldiers including Joe English himself. Nearby was placed a sink stone from the village of Merkem.

On it soldiers had written:

Here is our blood — when do we get our rights

Such a show of nationalism proved to be far too much for some and on 16th March 1946 the cross was deliberately destroyed by explosives. The guilty parties would remain unknown according to all subsequent investigations.

The current tower is eighty-five metres tall and a fine view is had across the landscape from its upper floor. Other floors depict the struggle for Flemish emancipation and the stupidity of war.

The massive front gate depicts statues of amongst others Joe English and the two Van Raemdonck brothers : Edward and Frans.

In the crypt you will find the original headstones of the martyrs.

The Van Raemdonck brothers had been sergeants in the 11th Company of the 24de Linieregiment. Edward was 22 years old and Frans 20.

On 26th March 1917 they were required to cross over the Ieperlee Canal on a prisoner taking patrol against a German position known as the Stampkopstelungen. In a hail of bullets Frans fell and nothing could prevent Edward from trying to get him back.

More than two weeks later the two brothers were found together, alongside another soldier: Soldat Aimé Fievez (a Walloon — French speaking Belgian). The fate of the brothers struck a note and they and Fievez were later buried in the crypt of the IJzertor in the same grave. 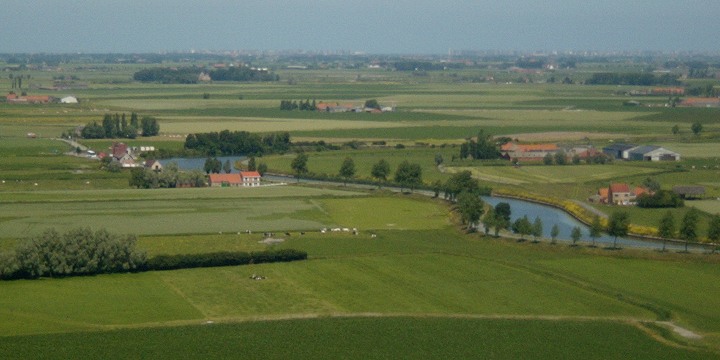 Looking out across the IJzer

The van Raemdonk Monument
Diksmuide 1914
The Battle of the Yser