The road system can appear overly complicated by the double tram line that runs along it.
Be very careful that you do not turn down it instead of the road. 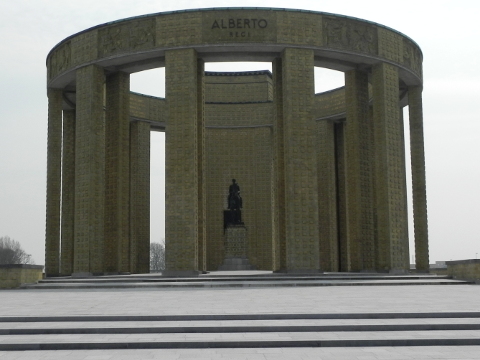 By the 18th October 1918 the Germans were on the outskirts of Nieuwpoort with seemingly little to prevent them from securing the coast and the all important channel ports.

Following the fall of Antwerp King Albert and his tiny Belgian Army had retreated behind the IJzer River and with the aid of French reinforcements had set about defending what was left of Belgium in Allied hands.

With the situation turning ever more desperate and his soldiers at the end of their ability to resist the German military machine King Albert, after consultation with his Staff and civilian engineers, gave permission to flood the polders between the IJzer and an embankment formed by the Nieuwpoort-Diksmuide Railway. 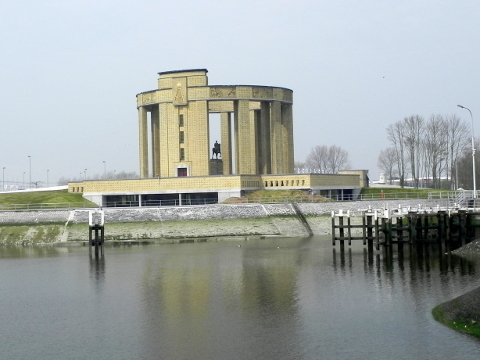 On the 27th October 1914 the inundation was begun by opening the Kattesas. This proved inefficient and the following nights the Noordvaart was opened right under the noses of the Germans (by now the Ganzeppot Sluice System was in no mans’ land).

Many decisions were made during the war but in October 1914 King Albert, the Knight King as he is known in Belgium, saved the coast from falling into the hands of the enemy.

Later, the Allied Supreme Commander, Maréchal Ferdinand Foch would state that France had been saved by a railway embankment a metre and a half high. 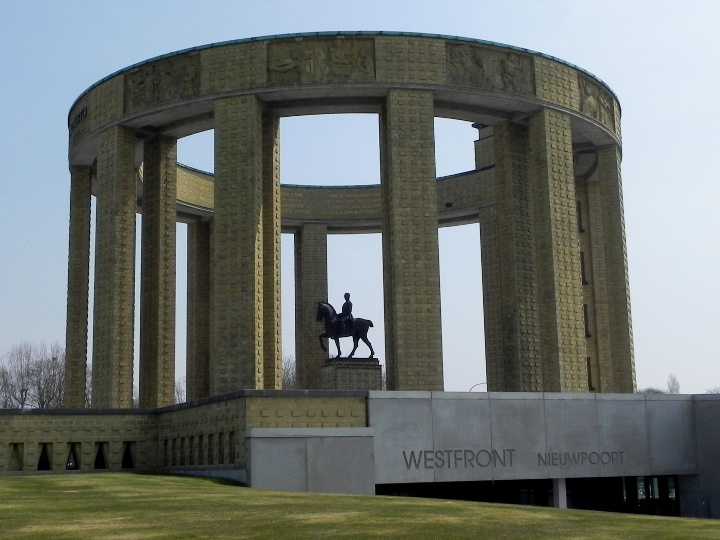 The full story of this momentous event is related in the Westfront Centre under the monument.

This is the most important of Belgian memorials and is as significant to them as the Menin Gate is to the British.

The idea for the memorial came from King Leopold III who informed the national veterans’ association that the royal family felt that having a central monument to the Knight King next to the Ganzepoot sluice gates. The Battle of the Yser had played a major role in the defence of the realm and it seemed only fitting that a memorial should be placed on its banks.

It was inaugurated on 24th July 1938 in the presence of all the royal family. A national ceremony is held here in August every year.

The memorial was designed by Julien de Ridder and the sculptor of the bronze figure of the King was Karel Aubroeck who also created the panels around the upper circle.

The circular monument is thirty metres in diameter and has a circumference of a hundred metres. The twenty columns are made of bricks brought from the IJzer valley. Many of them carry an inscription as to which part of the front they were created from and some carry fragments of shell and grenade as witness to the fighting.

Immediately behind the rotunda is the old entrance to the tower and panoramic platform. This has been superseded by a new lift which is gained from the Westfront Centre (situated underneath the monument — access is gained by going down the footpath behind the King).

On the wall is a bronze panel depicting Queen Elizabeth nursing a wounded soldier.

At the base of the tower you can see the first stone, laid on 8th August 1937.

On the inside of the upper ring are two poems in gilt letters, one in French and one in Dutch. The first verses of each are :

Here, not long ago, the King gathered his regiments and as soon as he spoke to them, burrowed into the plain, their feet in water, covered in mud and out of breath, they changed the Yser into a rampart.