On 25th October 1914 King Albert gave his permission to commence flooding the polders between the IJzer River and the railway line between Nieuwpoort and Diksmuide.

The system of sluice gates (Ganzepoot) that you see around the memorial were instrumental in creating and maintaining the inundation. 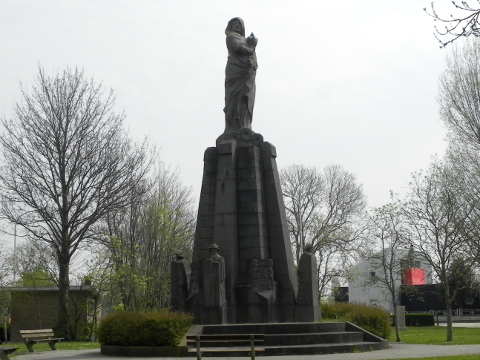 Sculpted by Pieter-Jan Braecke (a native of the town) the memorial represents a woman, high on top of the column, turning away from the enemy. In her hand she protects the Belgian crown.

The old French name for the river was Yser and the battle takes its name from that. Yzer is the Flemish name for what is more correctly (in Dutch) called the IJzer.

Around the base are four figures of soldiers : one wounded, one blind, one with his medals and one with a lion. In between the soldiers are the coat of arms of Belgium inscribed either with Union-Force, Belgique or Eendracht-Macht, België.

You may also notice that many of the blocks carry the letter V. The word Vaderlandertje was a nickname for the sandbags.

The memorial was commissioned by Prince Mérode the president of the National Committee for Remembrance and was inaugurated on the 26th October 1930.