From Ieper take the N369 towards Diksmuide. On arriving there follow the signs towards Oostende (turning right and then left). Having left Diksmuide continue for about three more kilometres before turning right at Beerst onto the N363. You will see a sign for the cemetery.

Four kilometres along the N363 you will see a sign turning you left towards the cemetery and Leke (Houtlandstraat).

The cemetery is on the left hand side in the wood immediately in front of you. Parking is available outside the cemetery gate. 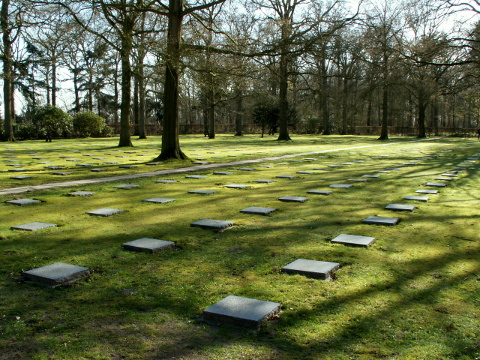 It was created in 1914 by German troops for those killed in battle during the Battle of the Yser (Referred to by the British as the 1st Battle of Ypres).

It originally held the remains of 3,233 German soldiers, however in 1956 a number of smaller cemeteries were concentrated into Vladslo and it now marks the resting place of 25,644 soldiers. 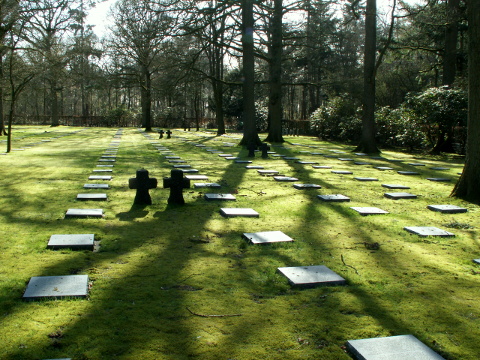 The burials were brought in from as far away as Antwerp, Namur and Liège and the cemetery is now one of the four great German concentration cemeteries in Belgium. 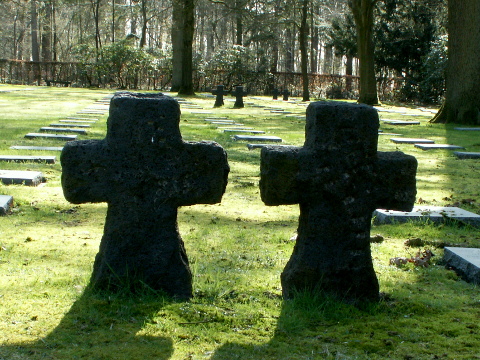 Gothic crosses are dotted about the cemetery

The situation for the quarter of a million German dead from the battles in West Flanderen is somewhat different. Originally the Soldatenfriedhofs were as numerous on the ground as Britain’s. However, the territory was rented — initially for only 30 years.

After the Second World War an agreement was reached in 1954 between the two governments and Belgium allowed four cemeteries which would act as concentration cemeteries. This land has also been given on a permanent basis.

The old wooden crosses have been replaced by blocks of Belgian granite each inscribed with up to twenty names.

There are however along the edges of the cemetery a number of original headstones. 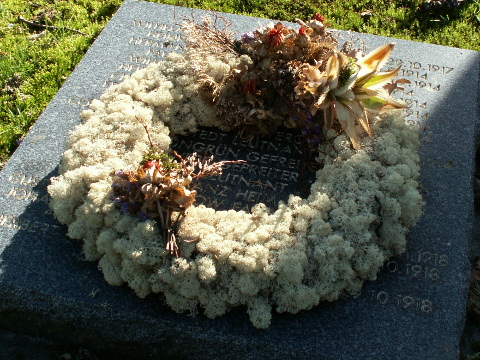 German wreaths are very different from our own 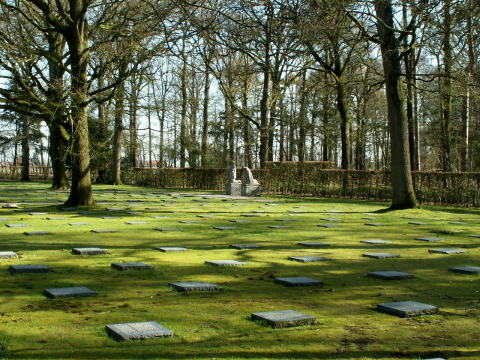 The grieving parents by Käthe Kollwitz

These two figures mourn over their sons and one in particular.

Peter Kollwitz was a Musketier when he was killed on 23rd October 1914 during an assault at Diksmuide. Until the concentration of the cemeteries, he had lain in the Cemetery at Eesen Roggeveld.

His mother, Käthe Kollwitz, a noted sculptress wanted to give some form of expression to her grief and in 1932 these two statues were placed in the Cemetery at Eesen Roggeveld. As time passed, the symbolisation of one pair of parents became more symbolic of all parents grieving over a lost child.

When Peter’s grave was moved to Vladslo, the statues were brought with him. His grave is just in front of them. 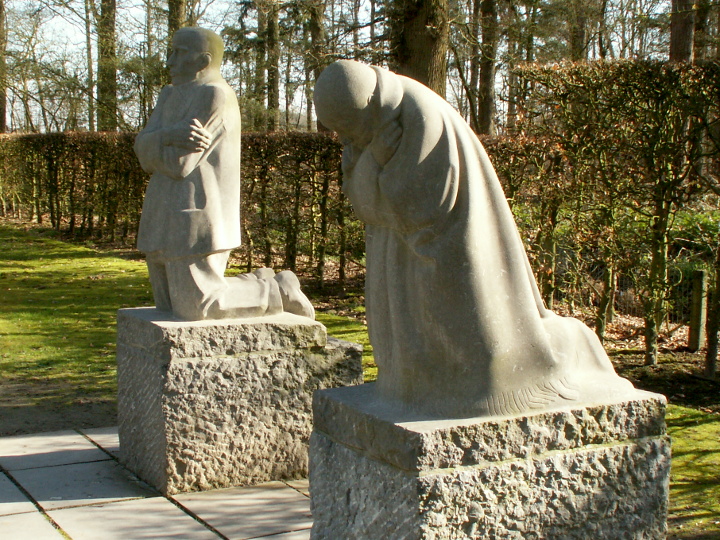 The grieving parents look down upon the tombs of the fallen