From Ieper take the N 369 in the direction of Diksmuide. On reaching the town follow the signs for Centrum.

From the Grote Markt (main square) with Sint Niklaaskerk on your left walk up Stationstraat to the Stadspark. On entering the park you will come to a roundabout footpath. Take the right hand exit and then take left at the fork walking up further into the park with the lake off to your left. Keep walking along this path until you reach a T-junction. The memorial is up on your left at the back of the swimming pool. 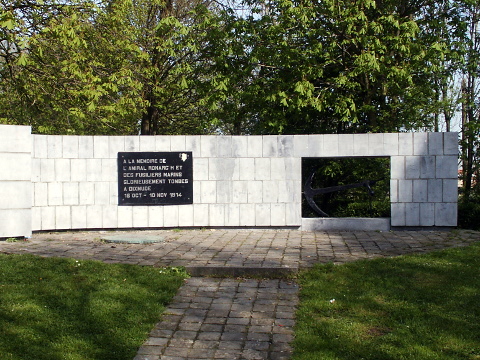 Like the British Royal Naval Division, the French Fusiliers-Marins (Marines) were reservist sailors who had been incorporated into a land based Brigade and sent to Belgium to assist in the defence of Antwerp. The only member of their Brigade who had ever fought on land was their commander, Amiral Pierre Ronarc’h who had fought during the Chinese Boxer rebellion.

Having reached Gent the Brigade turned around and retired on Diksmuide (Dixmude) where they were under instructions to form a point of resistance. Général Foch wrote to the Amiral stating that :

In the current circumstances, the tactics that you will apply will not be those of manoeuvre but simply, and to the greatest degree, to resist where you stand… You will stop the enemy… 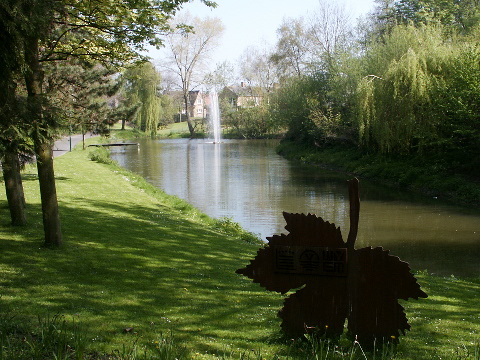 Ronarc’h had his own two regiments and two Belgian regiments (11de and 12de Linieregiments) alongside him. As further French reinforcements became available (with the arrival of their 42e Division under General Grossetti), battalions of north African troops would also join the garrison.

With the Battle of the Yser (The old French name for the IJzer) under way the Germans turned their attention on Diksmuide which became the only Belgian held sector on the right bank of the river.

The Germans managed to get across the IJzer at Tervate (north of the town) on the 21st October and secured the large petroleum tanks on the left bank. It was in a futile attempt to recover them that the Belgians began the trench system now known as the Dodengang — which can be visited today just outside the town.

Throughout the Battle of the Yser, Diksmuide was constantly shelled and subjected to attacks, but it was at the close of the battle, with the flooding of the polders between the coast and Diksmuide rendering their attacks elsewhere useless, that even more aggressive moves were made by the Germans to physically take the town.

As the town became ever more isolated, the Germans pressed their attacks from the east.

During the night of the 9th/10th November they bombarded what remained of the town and that morning launched an assault from Esen which broke through between the Belgians and the Senegalese. Threatened with encirclement the Allied garrison was forced to retire across the IJzer to the left bank.

The Germans would take the town but could not go any further despite constant efforts to force a passage across the river over the following days.

On 16th November the Brigade Navale was relieved at the front. It had suffered a 75% casualty rate in its defence of Diksmuide.

The monument consists of a curved wall on which are inscribed the words :

To the memory of Admiral Ronarc’h and the Fusiliers-Marins who fell at Diksmuide between 16th October and 10th November 1914. 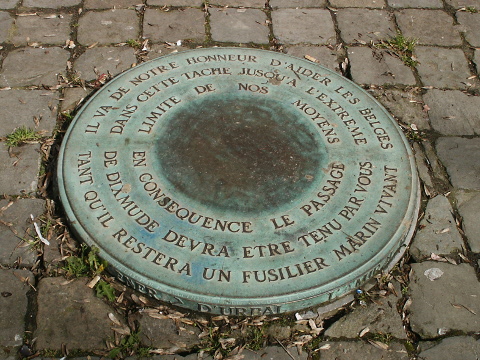 On the ground in front of the wall is a bronze disc which carries the engraving :

It is a matter of honour to aid the Belgians in this task and to the utter limit of our means. In consequence the passage at Diksmuide must be held by you whilst there is still a Fusilier Marin still alive.

Diksmuide 1914
The Franco-African Memorial, Nieuwpoort
The Battle of the Yser