The road system can appear overly complicated by the double tram line that runs along it.
Be very careful that you do not turn down it instead of the road.

This monument forms part of a large collection of memorials in and around the sluice gates (Ganzepoot). You will need to park and walk. 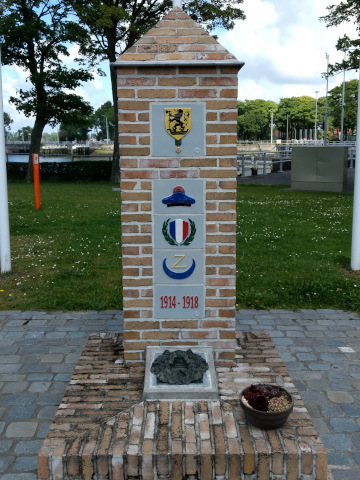 During the Battle of the Yser in 1914 French troops paid a major part in the defence of the River IJzer and the dunes of Lombardsijder along the coast.

French Fusiliers Marins (Marines), infantry and North African French-colonial soldiers fought with distinction in the decisive days before King Albert I ordered the polders to be flooded.

The gates used to control the flow of water are those immediately behind the monument and you will find further monuments to other units and civilians who braved the fighting all around this location.

It would be totally wrong to believe that flooding the polders was simply a matter of opening the sluice gates and letting the water in. It was in fact a highly complicated affair that had to be maintained throughout the war. Damage to the gates and even evaporation during hoot summers reduced the water level.

The story of what happened here is very well related in the Westfront centre on the far side of the canal and under the King Albert Memorial. 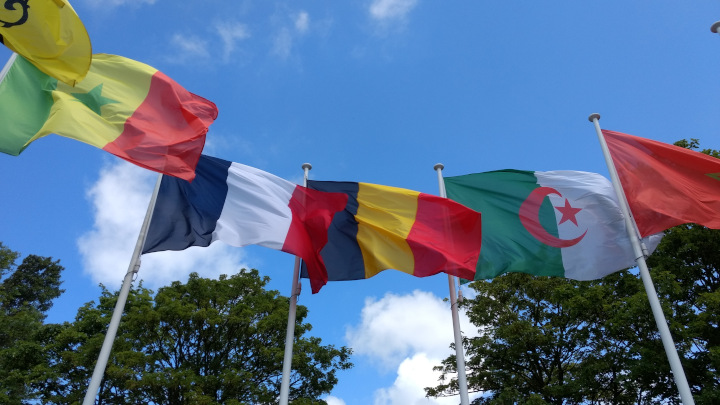 The monument is surrounded by the flags of
Senegal, Morocco, Tunisia, Algeria, France, Belgium and Nieuwpoort

The monument was an initiative of the late Burgemeester of Nieuwpoort, Roland Crabbe together with representatives of the involved countries and Souvenir Français.

“With this monument we want to express thanks to the 1,162 soldiers who lost their lives in the first two years of WWI safeguarding the lock complex and helping to preserve the inundation.”

The monument is built from bricks recovered from the ruins of a town house rebuilt in 1922 (notary Swennen).

Local artisans have contributed to the details. The enamel plates were created by Chris Messiaen. The cover plate for the urn was made by Hernani Tavares e Sousa. Decorative urns were created by Magda Bouillon to bring earth from the various countries.

The monument was constructed by the community school Nieuwpoort Department of Construction.

Buried at the base of the monument is an urn filled with earth from Senegal, Tunisia, Algeria, Morocco, France and Belgium.

The monument was inaugurated on the 2nd August 2015.

During the ceremony it was blessed by Father Viane, Rabbi Benizri, Iman Aftabet and Pastor Breukelaer.