From Ieper take the N 369 in the direction of Diksmuide. On reaching the centre of the town turn left onto the N35 (towards Veurne). As you cross the river IJzer, you will see the IJzertor Tower on your left.

Immediately after crossing the river turn right along the IJzerdijk in the direction of Stuivekenskerke (there is also a brown tourist sign for the Dodengang. This preserved trench system is the only Belgian Great War site still in existence).

When you reach the Dodengang follow the road around to the left and then turn right into Viconiastraat. The road is not a large one but stay on it until you reach Stuivekenskerke. The plaque is on the wall of the church. 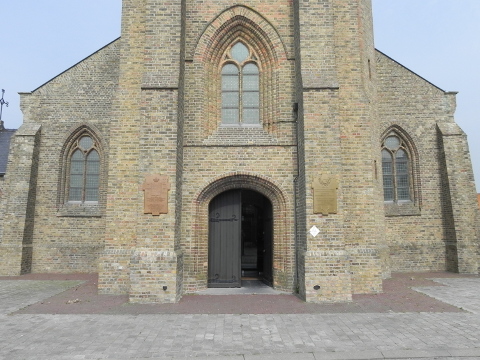 Following the retreat from Antwerp, King Albert gathered his small army behind the Yser (The modern spelling is IJzer). On 18th October 1914 the Battle of the Yser began with the Belgians forced to withdraw in the face of the Germans’ superiority in infantry and artillery.

By the 20th October the only part of the right bank still in Allied hands was Diksmuide — defended by Belgian infantry and French Fusiliers Marins.

On the night of 21st to 22nd October the 26 German Reserve Regiment using a makeshift bridge succeeded in getting across the river at Tervate, near Kilometre marker 10. The Dodengang trenches are at Kilometre marker 16, so six kilometres from Diksmuide, by river.

It was a difficult area to defend because the river runs around it on three sides, all of which were by now in German hands and to complicate things further for the Belgians, the hamlet was the juncture between the Belgians’ 1ste and 4de Legerdivisie (1st and 4th Divisions).

Having created a bridgehead on the left bank the Germans began moving down the towpath towards the hamlet of Tervate with the intention of securing and repairing the bascule bridge. The fighting between the two sides became intense and on the morning of 22nd October two battalions of the 8ste Linieregiment and the 1ste Carabiniers launched a counter-attack which was thrown back by the Germans.

At 1620 hours a second counter-attack was launched with four battalions from the 1ste Grenadiers, 1ste and 2de Carabiniers and the 4de Linieregiment. Led by Colonel Biebuyck they were stopped in their tracks by the Germans’ machine-gun fire. The losses were exceedingly heavy and the Belgians retreated back to the Vicogne Château at Stuivekenskerke — just around the corner from this church.

The Grenadiers have a monument on the banks of the IJzer at Tervate just a few minutes drive away.

To prevent the Germans from using it as an observation platform the Belgians burned down Stuivekenskerke’s church tower.

Ultimately, King Albert’s decision to inundate the Yser Plain at the end of October would stop the German advance and initiate trench warfare.

By a quirk of geography the Germans who took over the Vicogne Château found themselves on an island above the water level from which they could see Belgians in a similar position at Oud Stuivekenskerke (the former village). A few such other islands and farms were dotted about the inundated area.

The remainder of the Belgian and French troops holding the line in front of the Nieuwpoort-Diksmuide Railway were required to fall back behind it. The railway line is now a popular cycle track called the Frontzate and you almost drove over it as you turned right onto Viconiastraat from the Dodengang.

As you came along that road you may have noticed a small sign off to your right pointing towards OL Vrouwhoekje (OLV — Onze Lieve Vrouw — Notre Dame — Our Lady). This is the site of Oud Stuivekenskerke. There are informative panels and numerous memorials around a chapel (Onze-Lieve-Vrouw der Zege — Our Lady of Victory), should you venture down there.

When the old church in the village fell into a dilapidated state in 1870, it was decided by the local Burgemeester J.B. De Graeve that it would be cheaper to build a new one, which he did near his family home : the Vicogne Château. The old Sint-Pieterskerk was knocked down leaving only its bell tower. During the war this was used as an observation post by an artilleryman called Edouard Lekeux, who happened to be a Franciscan monk. The chapel was created at his initiative on his return to his cloisters after the war.

The plaque was unveiled on 19th April 1959 and commemorates the battles near the bend of the river at Tervate during the Battle of Yser and the role that the 8th Line Regiment played here.

The plaque shows the Belgian crown and regimental badge surrounded by the names of the following towns : Namen— Dendermonde — Yzer — Tervate — Esen — Kortemark.

In October 1914, on the banks of the Yser, the 8th Regiment witnessed
the sacrifice of its finest in the defence of King and Country.

On the other side of the church entrance is a similar plaque to the Carabiniers.