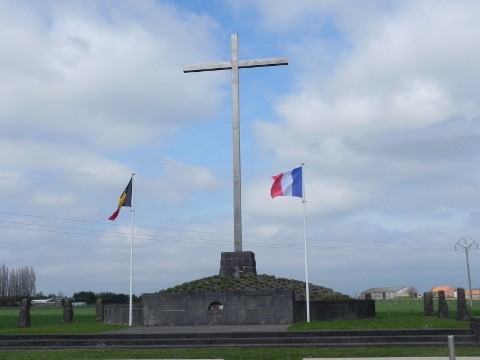 A few minutes after Boezinge you will see this tall Metal Cross on your left. This is the Franco Belgian Gas Memorial. Zuidschote is the village to your left.

Turn left immediately after the cross (Grenadiersstraat). The obelisk will be seen on your left. Parking can be difficult so it may be easier to park at the farm and walk the short distance. 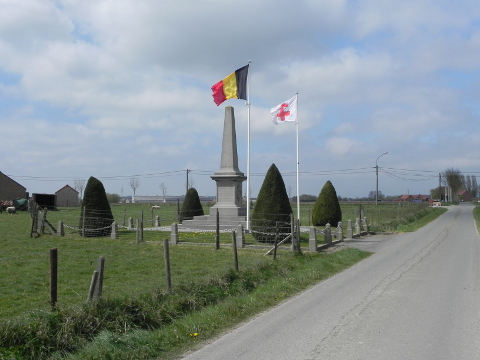 There are three gas attack memorials in the immediate area (as well as other Belgian memorials). This obelisk, the cross you have just seen and a plaque to the Belgian Carabineers which is a couple of minutes away on the wall of No 15 Generaal Lotzstraat in the village. Major Lotz was the commander of the 2nd Grenadiers during the battle.

This bombardment was followed by a massive discharge of chlorine gas between Langemark and Bikschote. A green mist that gently floated on a light breeze into the French Lines.

Thankfully the canal formed a natural barrier to the Germans and the remainder of the Territorials rallied to man the front lines. However by 1845 hours the Germans had reached the canal banks and taken Het Sas (which means: the canal lock) and were menacing Boezinge. The bridge at Steenstraat had fallen and the Germans had crossed over into Lizerne (the site of the cross).

On the northern side of the Steenstraat bridge the front was held by the 6th Belgian Division. The Belgian Grenadier Regiment closest to the bridge were fortunate in that the gas cloud had blown apart by the time it had reached the village and whilst the smell was still very much in the air and causing annoyance it was not sufficient to bowl the Grenadiers over.

With the aid of French troops the Grenadiers poured machine gun fire into the Germans but were forced back nevertheless.

Fighting continued in the area over the next few weeks involving both the Belgian Grenadiers and their Carabiniers Regiment alongside French troops. By mid-May the Germans had finally been pushed back across the canal. 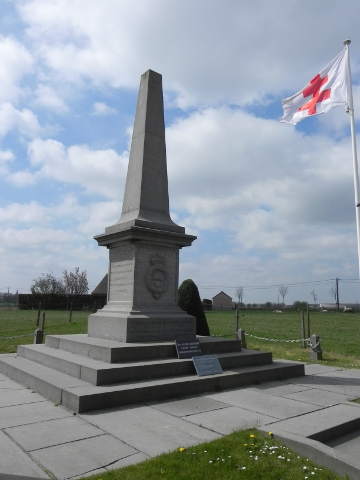 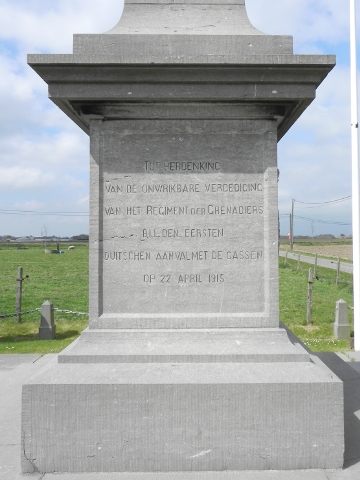 The monument was inaugurated by King Leopold III and Msgr. Lamiroy of Bruges on 22nd April 1934.

The text in Dutch and French states :

In commemoration of the unshakable resistance of the Regiments Grenadiers during the first gas attacks on 22nd April 1915.

The Regiment Grenadiers was created on 8th May 1837 by Leopold I. Formed by taking the elite companies from the other Line Regiments the Grenadiers would eventually be declared an elite unit themselves.

During the Belgian revolution of 1830 the 1 Regiment Jagers was equipped with carbines and was for that reason renamed the Regiment der Carabiniers in 1850. At the end of the nineteenth century Prins Boudewijn, nephew and designated successor to King Leopold II died whilst serving with the regiment. To honour his name the regiment was retitled : Regiment Carabiniers Prins Boudewijn.

They have served most recently in Croatia, Kosovo, Bosnia and Afghanistan.

The Cross of Reconciliation
The Carabineers Plaque
The Breton Memorial
The Gas Attack: 2nd Ypres 1915