Monument to the Nations

Flesquières is a village at the junction of the D92 and D89 roads, about 5 kilometres south-west of the main road from Cambrai to Bapaume. From the village centre take the D 89 (rue du moulin) towards Ribécourt. At the top of the hill you will see the flagpoles of the site on your left opposite a lane. You can also turn in to your left, towards the château d’eau, where there is room for a couple of vehicles. 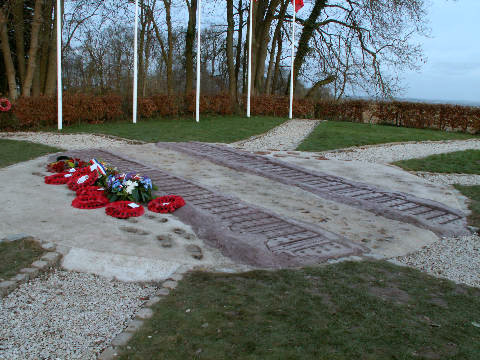 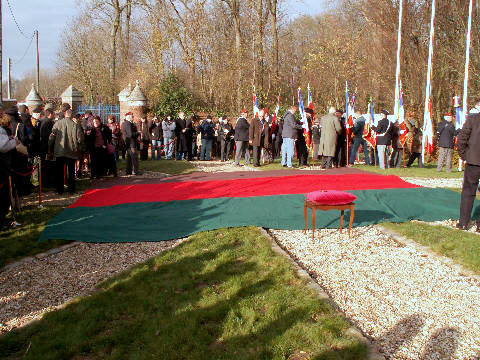 The brown, red and green of the Royal Tank Regiment
The colours chosen to lead them during the Battle of Cambrai

On 4th August 1917 Brigadier General Hugh Elles commanding the Tank Corps and his Chief of Staff : Lt Colonel John Fuller presented an idea for a full scale hit and run raid led by tanks against the Hindenburg Line. The tanks would smash their way through the German lines in the area of Banteux and Ribécourt drive on to Marcoing and then return to base.

This raid would eventually develop into a full scale offensive. IV Corps either side of Trescault would attack using two Divisions and III Corps on the right flank would use three. All nine of the Tank Corps’ battalions would be used. They would break through the Hindenburg Line and seize the towns of Masnières and Marcoing on the St Quentin Canal.

Everything was organised in the utmost secrecy. The tanks were brought forward at night and hidden away. The noise of their motors was masked by low-flying aircraft. Infantry-tank coordination skills were enhanced in preparation for the offensive. The Battle of Cambrai would be launched at 0620 hours on the 20th November 1917.

On that first day all went remarkably well, except at Flesquières where the 51st (Highland) Division failed to properly support their tanks, many of which were destroyed.

One of those tanks, Deborah would be found, wrecked but in one piece, in November 1998 after a local Cambrai man, Philippe Gorczynski had researched old stories about an abandoned tank near the village. Despite misgivings from some administrative quarters, his digging didn’t find parts of a tank — rather, all of one.

Further research and a fortuitous photograph of the tank after the battle showed that this was D 51 Deborah. She had been buried by the British it would appear and acted as a shelter.

After years of being displayed in a local barn, Deborah can now be visited in her own museum next to Flesquières Hill British Cemetery a kilometre or so away. 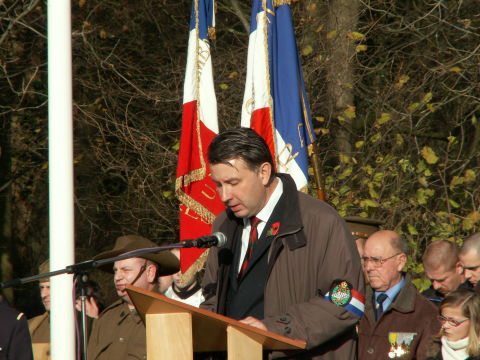 The monument which was unveiled on 24th November 2007.

The ground was generously made available by Madame Jacques de Valicourt and Monsieur Bertrand de Valicourt. The monument was built with the aid of the Royal Tank Regiment, the Royal Engineers and local involvement.

M Philippe Gorczynski a local authority on the battle and writer of : Following the Tanks was the principle organiser behind the project, as well being the President of the Tank of Flesquières Association.

The location is situated on part of the German trench system.

The layout of the paths represent the Union Flag, each cross pointing towards part of the battlefield.

In the centre a block of concrete represents the defences of the Hindenburg line crossed by the tracks of a tank advancing towards Cambrai. Around the tracks can be seen the footprints of the supporting infantry.

Within the ensemble is a semicircle of bricks marking the position of the former windmill which had been destroyed by the Germans.

To the rear are flagpoles bearing the (modern) flags of all the nations concerned in the fighting.

Two in particular may seem unusual : The United States and China. In fact, railway engineers from New York were responsible for bringing the tanks up to the battle zone and the often forgotten Chinese Labour Corps worked throughout to assist in preparing the tanks.

Plaques at the entrance to the small enclosure list the names of all the Allied units involved in the battle whilst an excellent panel provides a detailed view and explanation of the battlefield.

During the war a small military cemetery was created down the lane opposite the monument. Though long gone, the graves having been moved to other cemeteries, some of the roses that were planted in the cemetery have continued to thrive and cuttings from these have been planted in the monument grounds.

The unveiling ceremony was attended by a number of members of the Royal Tank Regiment both past and present as well as many of the local inhabitants.

The cutting of the ribbon was undertaken by Lieutenant General David Leakey, Colonel Commandant of the Royal Tank Regiment, who gave an admirable speech in both French and English.

Members of a number of reenactment societies added colour by parading in uniforms of the period.