7th Division were preparing to capture Mametz using an assault force of three battalions from 20th Brigade on the left and two from the 91st Brigade on the right: 1st Bn South Staffordshire Regiment and the 22nd Bn Manchester Regiment.

Part 1: The 20th Brigade at Mametz

The battle plan was for Mametz to be attacked on the flanks before a frontal assault was made later in the day.

Immediately in front of the South Staffs (who were positioned to the right of the 2nd Bn Gordon Highlanders of 20th Brigade) was a position called Bulgar Point which was the subject of a 2,000 lb mine with a smaller 200 lb mine to its left.

The detonation of these was certainly instrumental in the rapid progress made by the battalion as they managed to reach their section of Cemetery Trench within fifteen minutes of the attack commencing at 0730 hrs.

From here on they were held up by severe machine gun fire from Danzig Alley in front of them and Bunny Alley to their left.

Now, however they came up against stiff opposition from the Germans. At 0855 hrs. the Germans launched a series of counter attacks from the Fritz Trench which pushed them back out of
Danzig Alley.

At this stage D Coy 21st Manchester were sent up to assist their sister battalion to retake Danzig Alley. This in turn would allow 2nd Queens to come through and attack Fritz Trench — the Brigade’s Second Objective.

The attack by the Manchesters was launched at 1330 hrs. and succeeded in taking back Danzig Alley.

This helped 1st South Staffs take the remainder of Danzig Alley and continue into Bunny Alley on the far side of the village. 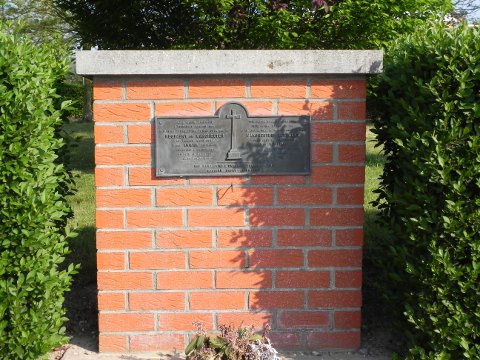 In the village of Mametz you will find
a memorial to the Manchester Regiments.

2nd Queens had been waiting in the front line whilst the other units had been attacking the first objectives, and in the early afternoon they moved forward. A and C Coys moved up behind the Manchesters whilst B and D Coys moved to the right.

By a mixture of frontal attack and bombing their way up the trench from the right Fritz Trench fell to the Queens.

By 1830 hrs the 91st Brigade had reached its Secondary Objective.

Mametz had fallen and the new gained territory was consolidated with 20th Brigade who had fought their way around the village from the west.

The Division moved forward into an area called the Queen’s Nullah in readiness to attack the next system of German Defence lines.