The village of Gueudecourt lies five kilometres directly south of Bapaume on the D 74. It is probably easiest reached from the main Albert-Bapaume Road (D 929) turning off at Le Sars.

The monument is signposted but is further away than you might expect from the main road.

Once you enter Gueudecourt turn north (Left coming from Le Sars) following the signs along the D 74E for just under a kilometre. The bronze caribou stands in a small paddock on your right. He stands on the point gained by the battalion on 12 October 1916. 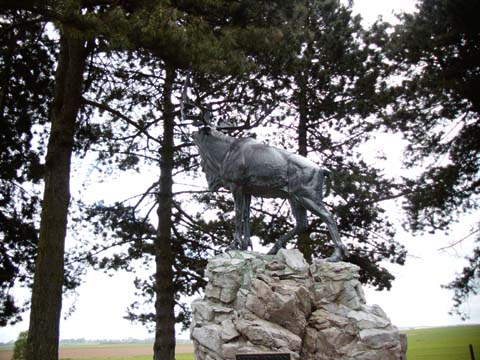 Following on from the capture of the Thiepval ridge on the northern side of the Albert-Bapaume Road, Field Marshal Sir Douglas Haig was keen in October 1916 to consolidate gains in the area of Gueudecourt and move on in conjunction with the French on the the southern side of the battlefield’s axis.

Following on from the opening weeks of the Somme when they had been so badly mauled at Beaumont Hamel the 29th Division had been moved to the Ypres Salient.

At the beginning of October though, the 88th Brigade including the Newfoundland Regiment were temporarily attached to the 12th Division who were about to take part in this major assault on the village of Le Transloy to the north of Flers. The Newfoundlanders were back on the Somme and in the front line at Gueudecourt.

The battle opened on 7th October from Lesboeufs in the east up to the village of Le Sars on the main road. Some gains were made — notably the capture of Le Sars by the 23rd Division, but elsewhere along the line gains were limited and in some places no movement had been made at all.

The weather was definitely wet for the time of the year and by the time the 12th Division were called upon to take up the struggle some parts of the battlefield were nothing more than oozing shell holes of mud.

The 12th Division were to advance from their trenches on the northern outskirts of Gueudecourt in an attempt to take the Hilt Trench. At 1405 hours on 12th October 1916 the Newfoundlanders left their trenches with the 1st Battalion Essex Regiment on their left.

The two battalions successfully gained Hilt Trench and then moved on towards their second objective — known as Grease Trench. Unfortunately, to their left the 35th Brigade had encountered uncut wire and suffered heavy casualties whilst trying to cut through by hand.

The 1st Essex were exposed on their left and were ordered to withdraw despite having at one point gained Grease Trench. The Newfoundlanders however had begun digging and consolidating their new position turning the German trenches around so that the firing positions now faced north east.

Later on in the afternoon the Germans launched a counter-attack against the Newfoundlanders who not only managed to hang on to Hilt Trench with grim determination but also managed to bomb their way up part of the trench system that had been intended to be held by the 1st Essex. 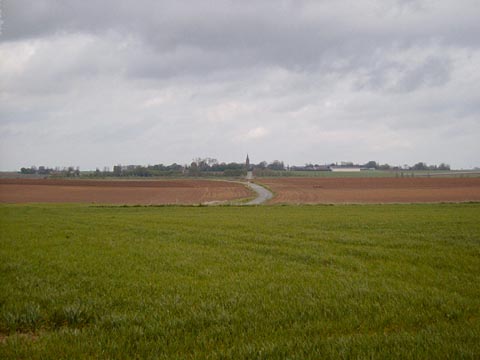 Looking back over the distance advanced from Gueudecourt

During the 55 hours that had elapsed since they had entered the trenches on 10th October, the Newfoundland Regiment had suffered 239 casualties — of whom 120 had been killed or would die of wounds.

“The success was all the more gratifying as it was the only real success recorded on that day.”

This was the limit of the British advance on the Somme, the weather deteriorated further and the two sides continued to look at each other until the Germans slipped away in February 1917 to their Hindenburg Line.