Maricourt is a village situated on the D938, Albert-Peronne Road, 10.5 km from Albert. Just after the centre of Maricourt turn onto the road towards Montauban de Picardie (D 197). The monument is on your right at the the junction of a minor road. There is enough room to park a vehicle. 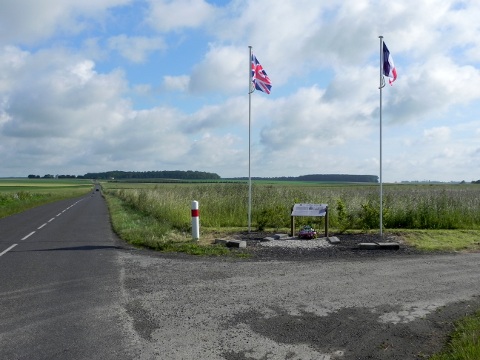 The 153e Régiment d’Infanterie (RI) was formed in 1887 and on the outbreak of war was stationed at Toul on the Franco-German border. It was part of the 39th Division d’Infanterie (Division d’acier – the Steel Division) and took part in the opening offensives at Morhange followed by operations on the Somme and in Flanders during 1914. In 1915 it was present during the battles for Notre Dame de Lorette in Artois and later in Champagne. Before coming to the Somme in July 1916 it had already spent three months fighting at Verdun.

On the outbreak of war the Colonel of the regiment was Louis de Grandmaison the architect of the French doctrine of l’attaque a l’outrance (attack at all costs) which would cause so many French casualties in those early months, including himself on the 20th August. Promoted to General in October he was given command of the 53e DI and killed by a piece of shrapnel on 18th February 1915.

This position marks the point where on the 1st July 1916 the British and French army fronts met.

That morning as the Battle of the Somme commenced Lt Colonel Bryan Fairfax commanding the 17th Bn King’s Liverpool Regiment and Commandant Lepetit commanding the 3rd Bn 153e RI advanced together across no man’s land, during the second wave of the offensive, as an act of friendship and co-operation between the two armies.

Both units succeeded in gaining their objectives and the 153e RI received a citation.

The 3rd Battalion of the 153e Régiment d’Infanterie began a vigorous attack under violent artillery fire, despite having seen its jumping off position damaged by the enemy artillery on two occasions. This battalion, led by Commandant Lepetit, moved forward, as practised during manoeuvres, and managed to sweep its way over five lines of enemy trenches covering an eight hundred metre stretch. German prisoners and weaponry were taken. On the 8th July the same battalion displayed the same courage in reaching its objectives in the minimum space of time and in spite of two counter-attacks by the enemy.

By the end of the war the Regiment would have received the Croix de Guerre and Croix de la Légion d’honneur and received six citations (Mentioned in dispatches) at army level. The latter entitled the soldiers to wear the red fourragère of the légion d’honneur. 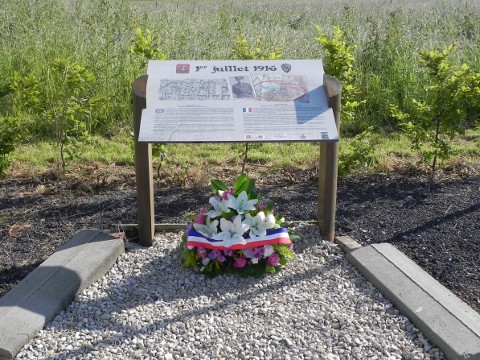 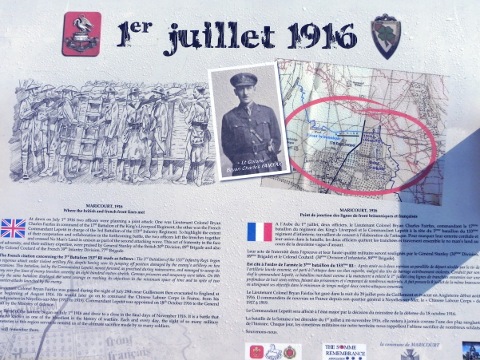 The memorial was conceived by the Somme Remembrance Association and inaugurated on the 7th November 2010.

The panel in French and English explains the history of the site and shows a trench map of the area marking the two fronts.

Whilst little could be discovered about Commandant Lepetit (His forename was never mentioned in documentation) apart from the fact that he was wounded in August 1916 and left the battalion, more is known about Lt Colonel Fairfax.

Born in 1873 Bryan Fairfax had already served in China during the Boxer Uprising and in South Africa. In 1914 he was recalled from the reserve and after a short period with the fledgling Royal Flying Corps was appointed to the command of the 17th Battalion King’s Liverpool Regiment (1st City); one of the Pals battalions.

Following the opening day of the Somme he and his battalion continued to advance towards Guillemont. On the 29th July 1916 he was gassed near Trones Wood and invalided home. He returned to France in July 1917 and was responsible for setting up the HQ of the Chinese Labour Corps at Noyelles sur Mer.

The other memorials in Maricourt

Monument to the 224e RI
Peronne Road Cemetery
The Somme 1916