The calvaire (crucifix) will be found just to the north of the village of Hardecourt au Bois on the road to Guillemont.

It is easily found from the D 64 road midway between Guillemont and Montauban de Picardie.

Leaving Guillemont you will pass the Guillemont Road Cemetery and then take the minor road on your left just as you reach the Bois de Troncs (Trônes Wood — on your right). The Maltzkorn Farm calvaire is quite visible at the crest of the hill. Continue down to the junction and the Cochin calvaire is on your left. 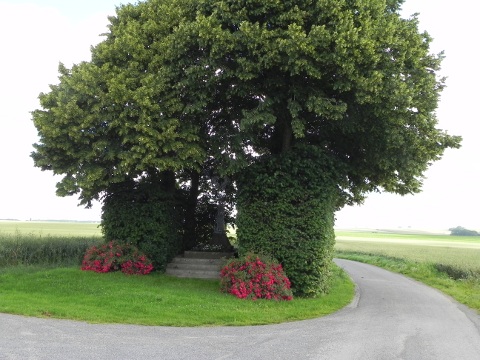 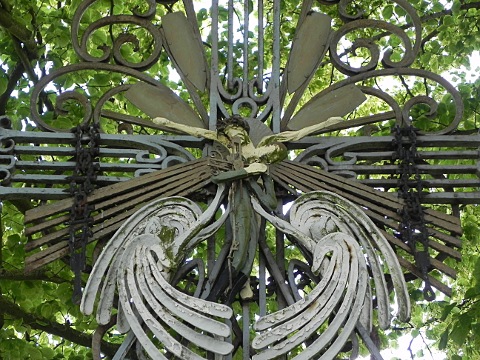 Detail showing the pieces of ordnance used in the cross

The 146e Régiment d’Infanterie had taken part in the highly successful French attack on 1st July 1916 for the Bois Favière.

A French Regiment consisted of three battalions which served together. So as to avoid confusion French units are given with their own abbreviations. The -e equates to -th etc., 146e/146th.

At 0930 hours on 8th July the 2nd and 3rd Battalions of the 146e RI launched their assault on the village of Hardecourt whilst on their left the British were engaged in the assault on Trônes Wood.

The II/146e RI partially achieved their objective whilst the III/146e RI continued their advance towards the Maltzkorn Farm on the crest of the hill. Unfortunately the French artillery was firing short and this forced some of the battalion to retire out of the danger of their own shells.

As the Germans launched a counter attack Capitaine Cochin led his 9e Compagnie out in a charge that put an end to the Germans’ plan. In doing so he was killed at the head of his men.

The cross is partially made up of machine gun chains and shells.

His mother, the Baronne Denys Cochin decided to reconstruct the village crucifix as well as the church in memory of her son. She had the original crucifix which had been badly damaged by the battles transferred to the chapel in the Hôpital Cochin (Hospital) at Paris. It can be found above his tomb.

The first hospital had been founded in 1870 by Jean Cochin, curé of the parish of St Jacques du-Haut-Pas. Created to aid the local popualtion it was reconstructed at the beginning of the 20th Century.

It still exists today and is the capital’s foremost burns unit as well as a centre of research. The former French President Jacques Chirac was once treated there following a car accident.