Longueval is a village 11 kilometres east of Albert. The South African Memorial is east of the village and on the south side of the road from Longueval to Ginchy.

There are numerous signs indicating the route from the surrounding arterial roads.

Parking space is available in the vistors’ centre when open. Otherwise there is some parking space along the roadside at the memorial entrance opposite Delville Wood Cemetery. 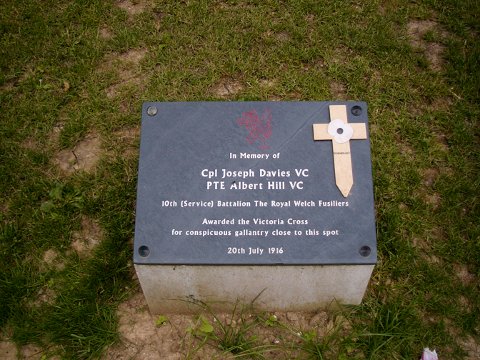 The Davies — Hill, Tree Memorial
can be found to the left of the South African Museum in Princes Street.

On 20th July the 10th Battalion Royal Welch Fusiliers distinguished itself in an attack on Delville Wood in order to reach the South African Brigade which had entered the wood on the 15th July and was now cut off.

At 0345 hours the battalion entered the wood via Buchanan Street intending to get to Princes Street. They were led astray by their guide and suffered heavy casualties from Allied machine gun fire.

The action became confused as the Germans mounted counter attacks but ultimately the Fusiliers along with other units of the British 76th Brigade managed to relieve the few survivors of the South African Brigade.

Two members of the battalion, Corporal Joseph Davies and Private Albert Hill, were awarded the Victoria Cross for their part in the action. 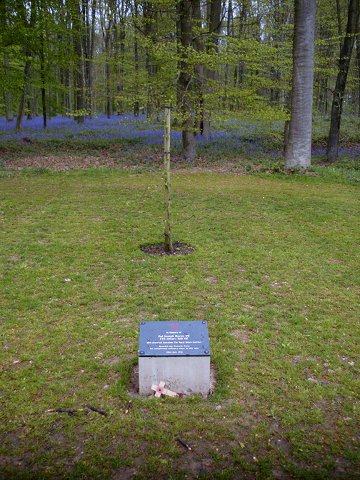 In 2002, a beech was planted along Princes Street, not far from the Last Tree.

It commemorates the action by two members of the 10th Battalion, The Royal Welch Fusiliers on the 20th July 1916.

For most conspicuous bravery. Prior to an attack on the enemy in a wood he became separated with eight men from the rest of his company. When the enemy delivered their second counter-attack his party was completely surrounded, but he got them into a shell hole, and by throwing bombs and opening rapid fire, succeeded in routing them.

Not content with this he followed them up in their retreat and bayoneted several of them. Corporal Davies set a magnificent example of pluck and determination. He has done other gallant work and was badly wounded in the second battle of Ypres.

For most conspicuous bravery. When his battalion had been deployed under very heavy fire for an attack on the enemy in the wood, he dashed forward, when the order to charge was given and, meeting two of the enemy suddenly bayoneted them both He was sent later by his platoon Sgt. to get in touch with the company and, finding himself cut off and almost surrounded by some twenty of the enemy, he attacked them with bombs, killing and wounding many and scattering the remainder.

He then joined the Sgt. of his company and helped him to fight the way back to the lines. When he got back, hearing that his company officer and a scout were laying out wounded, he went out and assisted to bring in the wounded officer, two other men bringing in the scout. Finally he himself captured and brought in as prisoners two of the enemy. His conduct throughout was magnificent.

Both men would survive the war. Davies died in Bournemouth Hospital on the 16th February 1976 whilst Hill emigrated to the United States where he died at Pawtucket, Rhode Island on the 17th January 1971.

The other memorials in Delville Wood