The Vimy Canadian National Memorial overlooks the Douai Plain from the highest point of Vimy Ridge, about eight kilometres north-east of Arras on the N17 towards Lens. The memorial is signposted from this road to the left, just before you enter the village of Vimy from the south. The memorial itself is some way inside the memorial park, but again it is well signposted.

Alternatively take the D 937 towards Béthune. At Neuville Saint Vaast you will enter the battle zone of 1915 and the Vimy is very well sign posted from here.

There is far more to see in this general area than the Canadian Memorial Park. Cemeteries containing a total of two hundred thousands burials can be found within ten minutes driving. There are monuments to the Czechoslovakian and Polish soldiers of the French Foreign Legion, two very good French museums and souvenirs of the desperate battle fought here by the French and British during May 1940.

You can commence at the significant village memorial at La Targette. 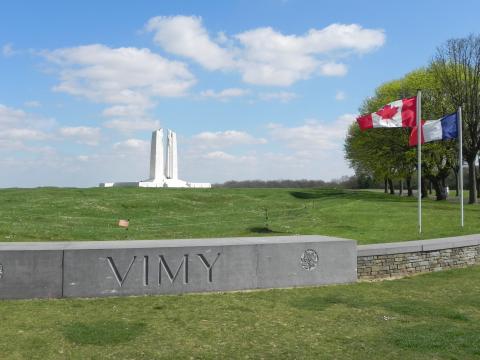 On the opening day of the Battle of Arras, 9th April 1917, the four divisions of the Canadian Corps, fighting side by side for the first time, scored a huge tactical victory in the capture of the 60 metre high Vimy Ridge.

After the war, the highest point of the ridge was chosen as the site of a great memorial to ALL Canadians who served their country in battle during the First World War, and particularly to the 66,000 who gave their lives in France and Belgium. It also bears the names of 11,285 Canadian servicemen who died in France — many of them in the fight for Vimy Ridge — who have no known grave.

The memorial was designed by Walter Allward.

Constructing the monument
The Visitors’ Centre 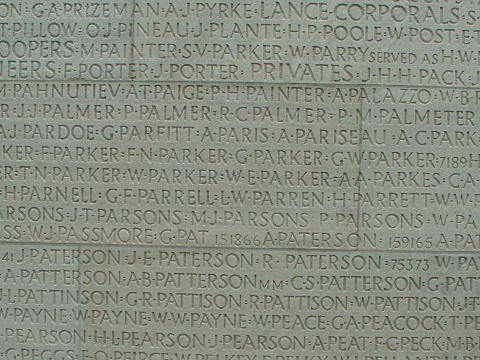 There are four recipients of the Victoria Cross mentioned on its walls.

For most conspicuous bravery and example. He steadied his Company under intense fire and led them through the enemy barrage, reaching the objective with only five men. With great coolness and courage Lieutenant Combe proceeded to bomb the enemy, and inflicted heavy casualties. He collected small groups of men and succeeded in capturing the Company objective, together with eighty prisoners.

He repeatedly charged the enemy, driving them before him, and whilst personally leading his bombers was killed by an enemy sniper. His conduct inspired all ranks, and it was entirely due to his magnificent courage that the position was carried, secured and held.

During a strong enemy counter-attack a Lewis gun in a forward post in a communication trench leading to the enemy lines, was buried by a shell, and the crew, with the exception of one man, was killed. Serjeant Hobson, though not a gunner, grasping the great importance of the post, rushed from his trench, dug out the gun, and got it into action against the enemy who were now advancing down the trench and across the open.

A jam caused the gun to stop firing. Though wounded, he left the gunner to correct the stoppage, rushed forward at the advancing enemy and, with bayonet and clubbed rifle, single-handed, held them back until he himself was killed by a rifle shot. By this time however, the Lewis gun was again in action and reinforcements shortly afterwards arriving, the enemy were beaten off.

The valour and devotion to duty displayed by this non-commissioned officer gave the gunner the time required to again get the gun into action, and saved a most serious situation.

For most conspicuous bravery and devotion to duty in attack. On approaching the first objective, Private Milne observed an enemy machine gun firing on our advancing troops. Crawling on hands and knees, he succeeded in reaching the gun, killing the crew with bombs, and capturing the gun. On the line re-forming, he again located a machine gun in the support line, and stalking this second gun as he had done the first, he succeeded in putting the crew out of action and capturing the gun.

His wonderful bravery and resource on these two occasions undoubtedly saved the lives of many of his comrades. Private Milne was killed shortly after capturing the second gun.

For most conspicuous bravery and self-sacrifice when, during an enemy counter-attack, his platoon was isolated. Thereupon Serjeant Spall took a Lewis gun and, standing on the parapet, fired upon the advancing enemy, inflicting very severe casualties. He then came down the trench directing the men into a sap seventy-five yards from the enemy. Picking up another Lewis gun, this gallant NCO again climbed the parapet, and by his fire held up the enemy.

It was while holding up the enemy at this point that he was killed. Serjeant Spall deliberately gave his life in order to extricate his platoon from a most difficult situation, and it was owing to his bravery that the platoon was saved.