The monument will be found off the D 64 midway between Guillemont and Montauban de Picardie.

Leaving Guillemont you will pass the Guillemont Road Cemetery and then take the minor road on your left just as you reach the Bois de Troncs (Trônes Wood — on your right). The Maltzkorn Farm calvaire is quite visible at the crest of the hill and just after it you will see this small monument in the fields off to your right. 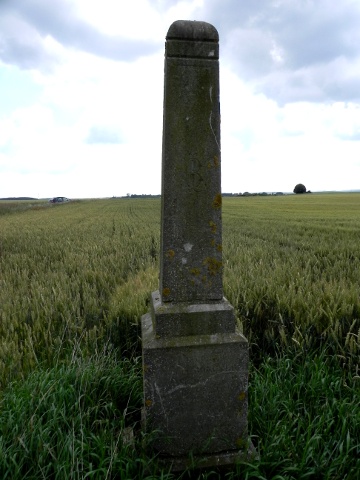 The 153e Régiment d’Infanterie had taken part in the highly successful French attack on 1st July 1916 against Maricourt. They were then involved in the battle for the Bois Favière on the 6th and 8th July whilst the British 18th Division, to their north, were engaged in the fighting for Trônes Wood. The Regiment was relieved on the 9th July and returned to cantonment in Cerisy-Gailly.

A French Regiment consisted of three battalions which served together. So as to avoid confusion French units are given with their own abbreviations. The -e equates to -th etc., 153e/153rd.

Called back to the front on 26th July they were placed into the trenches facing Maltzkorn Farm and the northern sector of the village of Hardecourt.

Their 1er Btn was on the right in touch with the 146e RI and the 2e Btn on the left joining up with the British. The 3e Btn was held in reserve (In the wonderfully named Trenchée des carottes – Carrot Trench) in preparation for a further offensive on the 30th July.

Over the course of the next few days their positions were under constant bombardment by the German artillery and during that of the 28th there were a number of injured and dead including the two soldiers commemorated by the stèle.

On the 30th July a company of the 3e Btn together with two companies from the 2nd Bn Bedfordshire Regiment of the 30th Division took Maltzkorn Farm, however, elsewhere the French advance was not as positive against Maurepas as had been hoped.

To the memory of Marcel Boucher and his comrade Roméo Lepage of the 153e Régiment d’Infanterie who fell here on 28th July 1916.

Both men were in what was known as the class of 1916 which meant that they had turned twenty that year (13th May and 20th June respectively). Even today the 20th Birthday is considered as the big one as it used to mean eligibility for conscription (no longer the case of course).