Using the D919 from Arras to Amiens you will drive through the villages of Bucquoy, Puisieux then Serre-les-Puisieux (approximately 20 kilometres south of Arras). On leaving Serre-les-Puisieux, 700 metres further along the D919, Serre Road No.1 Cemetery can be found on the right hand side.

Just before reaching the cemetery you will see on your right you will see a set of CWGC direction signs indicating the way to a group of small cemeteries and the Sheffield Memorial Park.

Park at Cemetery No 1 and walk back to these signs (The memorial park is worthy of a visit in any case). As you walk up the track if you look to your left you will see this plaque on the wall of the farm buildings.

On the outbreak of war in 1914 the British Army was geared to fighting the odd colonial war but certainly not a large scale conflict against the massive conscripted armies of Europe.

The response to Kitchener’s call that Britain had need of men was that hundreds of thousands thronged the recruitment offices to join up and do their bit – for the duration of the war ! However, men (and at times boys) not only wanted to get into the army, they also wanted to go into battle with their relatives, friends and in particular workmates.

Thus was born the idea of the Pals Battalions.

The 93rd Brigade formed part of the 31st Division and consisted of four battalions :

The 31st Division were the most northerly Division on the battlefield (excepting the feint at Gommecourt) and were required to swing up and round on a pivot at Serre to face northwards and thus act as a guard for the remainder of 4th Army to the south.

The 15th West Yorkshires, as the lead unit, were destroyed almost before they had moved out of their own lines and the 16th and 18th coming up behind them suffered a similar fate as they advanced over open ground towards their own front lines.

Despite the carnage in front of them the 18th DLI (Durham Pals) moved forward on time at 09:30 hours, passing through the remnants of the other three battalions. They too found that they could make little progress in the face of the hail of rounds and shells falling about them.

Some of their men from D Company, however, who had gone forward in the second wave managed to reach the German front lines and it is thought that some even managed to make it as far as Pendant Copse, but none ever returned. 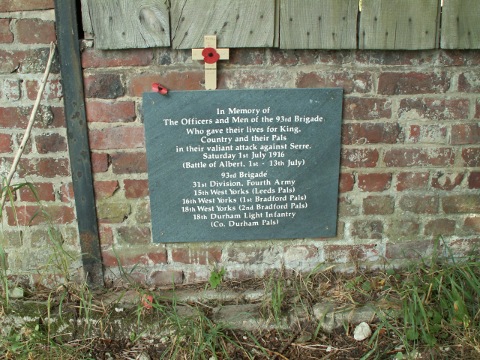 In Memory of
The Officers and Men of the 93rd Brigade
Who gave their lives for King,
Country and their Pals
in their valiant attack against Serre
Saturday 1st July 1916
(Battle of Albert 1st – 13th July)