Using the D919 from Arras to Amiens you will drive through the villages of Bucquoy, Puisieux then Serre-les-Puisieux (approximately 20 km south of Arras). On leaving Serre-les-Puisieux, 1.3 km further along the D919, Serre Road No.2 Cemetery can be found on the left hand side. 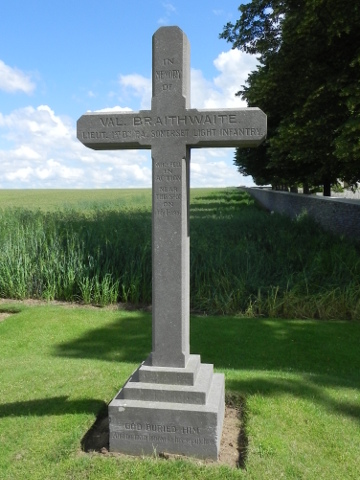 Following a week-long bombardment the British Army launched its great offensive on the Somme on the 1st July 1916. VIII Corps was responsible for the northern sector of the battlefield with the 29th Division attacking in the area of what is now the Newfoundland Memorial Park, then the 4th Division and finally the 31st Division in front of Serre where you will find the Sheffield Memorial Park.

Part of 4th Division’s task was to assist 31st Division on their left by taking out the Quadrilateral Redoubt a remnant of the old trench system prior to the French attacks of 1915 which was situated in the area of the Cemetery.

To accomplish the task they had been loaned two Battalions from 48th Division, made up of Birmingham Territorials.

The wire had been well cut but the German defenders had been sheltering in deep dugouts and when the 11th Brigade under Brigadier General Prowse went forward at 0730 hours they were met with a storm of fire from Redan Ridge (which is just behind Serre Road Cemetery No 2).

On the left of the Division the Warwickshire Battalions gained the Quadrilateral which by an error of the defenders had been left poorly defended.

At 0740 hours, punctual to the timetable, the second wave of 11th Brigade moved forward but the sweeping machine gun fire (which had started long before the bombardment had finished) continued unabated throughout and forced the 1st Bn Somerset Light Infantry over to the left where they reinforced the newly won Quadrilateral before moving forward another three hundred metres.

The Quadrilateral was held for the rest of the day and represented the only real gain by 4th Division for the day. It was short lived however as the position had to be given up the following day. 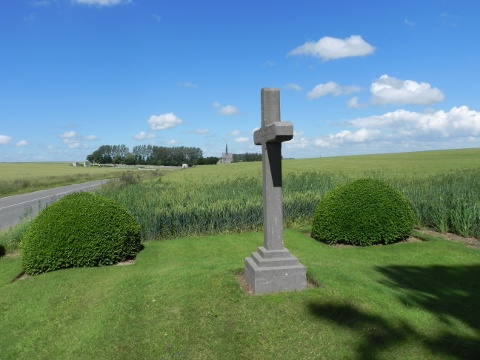 It is dedicated to the memory of Lieutenant Valentine Braithwaite MC who served in the 1st Bn Somerset Light Infantry.

Braithwaite gained his Military Cross (one of the first to be awarded in the war) at Mons in 1914. He later served in Gallipoli as an ADC to his father: General Sir Walter Braithwaite, KCB, ADC, who had been Chief of the General Staff.

At the base of the cross is inscribed :

God buried him
And no man knoweth his sepulchre

Braithwaite’s body was never recovered and he is commemorated on the Thiepval Memorial (Pier 2A).

The battalion’s Commanding Officer, Lt Colonel Thicknesse plus another 25 officers and 438 soldiers had been killed, wounded or were missing. Most had been brought down before even leaving their own trenches.

Brigadier General Prowse commanding 11th Brigade (an ex SLI man himself) was mortally wounded in the morning as he left his HQ to find out what was going on in the Quadrilateral.

The original wooden cross is in the crypt at Winchester Cathedral.

Lt Valentine Braithwaite is commemorated on the Thiepval Memorial

Lt Colonel John Thicknesse is buried in the Sucrerie Cemetery at Colincamps a few minutes down the road in the direction of the Newfoundland Memorial Park (away from Serre).

Brigadier Prowse is buried not far away at Louvencourt and also has a cemetery named after him: Prowse Point Military Cemetery in Belgium.

There is also a large French Military Cemetery recording the fact that the French lost more men in one single attack than the British were to do in two.