The attack by the 36th (Ulster) Division on their far left flank, across the Ancre River, failed to capture Beaucourt and Beaumont Hamel. This was in part due to failures in the offensive to their immediate left, but created a knock-on effect south of the river.

The battle for Beaucourt: July 1916

As the Ulstermen attacked the Schwaben Redoubt on the souther bank of the river, it was left to the 32nd Division to capture the Leipzig Redoubt. The German position was the stronger for being situated on the ridge with the attacking British having to come up the hill in easy view of machine gun posts and artillery. Unlike the 36th the men from the 32nd would not have the cover of Thiepval Wood to help conceal their movements.

The attack on the Schwaben Redoubt

On the outbreak of war in August 1914 the British Army was a small professional body made up of Regulars, and Territorials who formed the immediate reserve. Lord Kitchener was one of the few
public officials to refute the idea that the war would all be over by Christmas and set about forming a new army, made up of volunteers.

Your Country Needs You proclaimed the recruiting posters and in a frenzy of patriotism thousands joined. Many of these new battalions were made up of men who joined up as a group: perhaps by town, perhaps by trade. They would always refer to themselves as a pals battalion regardless of what the Army wanted to call them.

The 96th Brigade who were to make a direct attack on Thiepval was made up of three pals battalions. The 1st Salford Pals were officially the 15th Bn Lancashire Fusiliers and one of four Salford Pals battalions fighting on the Somme in July 1916.

The unit on the 1st Salford’s right as they attacked Thiepval Village that morning was the 16th Northumberland Fusiliers –- The Tyneside Commercials. Immediately behind them was the 2nd Salford Pals — the 16th Lancashire Fusiliers.

The modern day village gives a false impression as to just how many buildings were here in 1916. Almost a hundred buildings had been turned into fortresses by the Germans, with machine guns
covering all the approaches.

Positioned around the village were about 30 machine guns — all with perfect views of the open slopes before them.

Along this particular section of the front line the artillery bombardment of the previous week had failed to clear the barbed wire.

As the Salford men left their trenches they were hit by a constant stream of machine gun fire. A few managed to survive the wire and entered the village. The commanders on the ground believed that the village was being taken and halted any further artillery action against Thiepval.

Far from having been taken the German gunners were now left free to turn their attention to the west where they could see the Ulstermen attacking the Schwaben Redoubt.

The Tyneside Commercials fared no better. The Germans were in such a commanding position they were able to stand on their parapets and put down a blanket of fire on the allied trenches.

The Tyneside Commercials never even made it to the German front line but were forced back to their own lines. There they continued to be harassed by German Artillery.

Contrary to the almost accepted idea that all the generals were indifferent to the losses their units sustained, here was a case where the third attacks were never pressed home because commanders
realised that further attacks were futile.

Even so, of 24 officers and 650 men from the 1st Salford Pals who attacked Thiepval, 21 officers and 449 men became casualties. 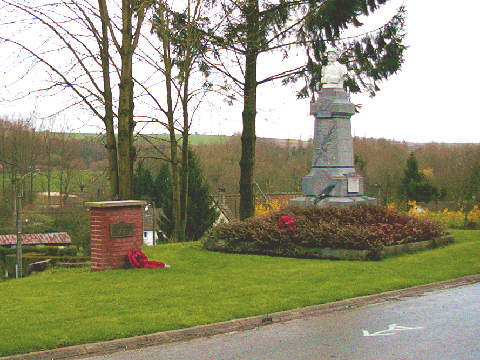 On the left of the Authuille Village Memorial you will find the small stone wall which has been erected in commemoration of those Salford Pals who lost their lives in the vicinity of the village and Thiepval during the battle.