Longueval is a village 11 kilometres east of Albert. From the village square take the road towards Flers (D 197) following the signs for the memorial. A short distance along this road you will turn off to the left and up a long laneway to the monument.

There is parking space there and the monument sits in the centre of a turning circle.

The Battle of the Somme opened on the 1st July 1916. It soon became a battle of two halves with progress being made south of the Albert-Bapaume Road and an almost complete stalemate on the northern side.

After slowly pushing forward village by village a new offensive was planned for the 15th September 1916 to conquer the villages of Flers and Courcelette. For the first time in history tanks would be used in battle.

The New Zealand Division had an important part to play in the capture of Flers but unfortunately they got off to a bad start.

Charging forward seconds before zero (0620 hours) the 2nd Otago and 2nd Auckland Battalions got caught by the final rounds of the British barrage. They pressed on regardless and captured the Switch Line and within thirty minutes were digging in some 50 metres on the far side of it.

There was now a pause to consolidate before the barrage began to move on again at 0720 hours when the 4th Bn NZ Rifle Brigade continued the advance to the next objective where they were in turn leap-frogged by the 2nd and 3rd Rifles.

Looking towards the village of Flers

By 1100 hours the 2nd Rifles were digging in on the Third Objective on the north-west of the village of Flers. On their left the 3rd Rifles had been held up by uncut barbed wire but at about 1030 hours two tanks (D11 and D12) finally arrived and dealt with both wire and defenders from the 5th Bavarian IR.

The 3rd Rifles moved up on the left of the 2nd Rifles whilst the 1st Rifles attempted to continue the advance into Grove Alley but were repulsed.

On the left the 47th Division had been held up but in Flers the 41st Division advanced up the main street behind tank D16 (famously reported in the press).

The New Zealand Division would fight on for twenty-three consecutive days, advancing three kilometres and capturing eight kilometres of the Bavarian’s front line. In doing so they suffered 7,000 casualties.

The New Zealand Memorial at Longueval 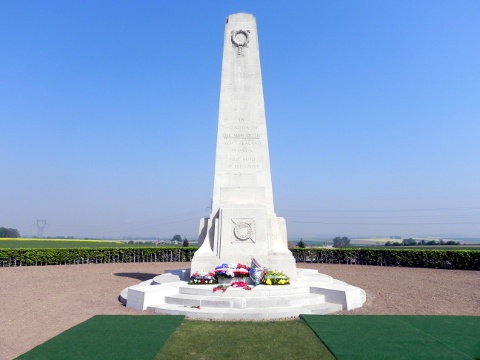 The memorial was unveiled in October 1922 and stands on the site of the Switch Trench and First Objective on the 15th September 1916.

Like other New Zealand memorials it takes the form of a column on a raised stepped base. At the base of each side there is a panel.

In Honour of the men of the New Zealand Division. First Battle of the Somme, 1916 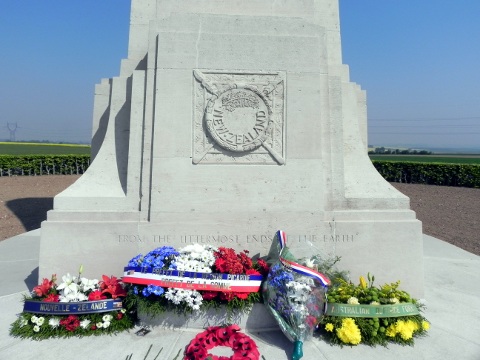 Underneath this is a design of a Maori carving surrounding the words New Zealand and a fern-leaf.

The sides carry (in English and French) the story of the day.

The New Zealand Division, after gaining this position as their first objective, launched from it the successful attack on Flers, 15th September, 1916

At the base of the monument is engraved the phrase From the uttermost ends of the earth.

Looking back towards Longueval.
In the trees on the far right is Caterpillar Cemetery and the New Zealand Memorial to the Missing.

The other memorials in Longueval