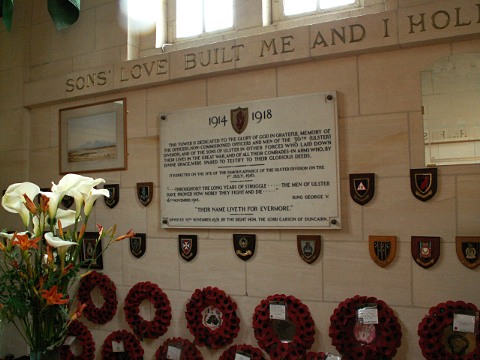 Programme for the day

The Prime Minister of Northern Ireland receives the Visitors on behalf of the Committee and asks Field Marshal Sir Henry Wilson, Bart, GCB to unlock the Memorial Tower (handing him a presentation Silver Casket containing the Key). The Field Marshal will make a speech (in French) welcoming the French representatives who are present, and open the Tower.

Lord Carson of Duncairn will unveil the Tablet in the Memorial Chamber.

In fact Lord Carson was ill
and unable to attend.

The Dedication Service will be performed by the Primate of All Ireland, the Moderator of the Presbyterian Church, and the President of the Methodist Church in Ireland.

The visitors will then file outside, and Her Grace the Duchess of Abercorn will unfurl the First Union Jack, presented by the Women of Ulster; and the French National Flag, presented by Messrs, Samuel Wilson and Co.

The Prime Minister of Northern Ireland will then ask those present in a representative capacity to plant trees which have been brought from Ulster.

General Nugent, CB, DSO, who was in command of the Ulster Division on the 1st July 1916; Captain Charles Craig, MP, and other Officers who took part will describe the memorable advance of the Division.

Visitors will inspect the Tower.

Leave in motors for Albert, where déjeuner will be served at 1 pm at the Salle des Fêtes (by kind permission of the Mayor of Albert).

The Prime Minister for Northern Ireland (and the first to hold the office following the partition of Ireland in 1921) was James Craig, 1st Viscount Craigavon. He would remain in office until his death on the 24th November 1940. Craigavon was the name of the family home on the outskirts of Belfast.

In April 1919 James Craig wrote to the 36th Division’s Commanding Officer stating that over £5000 had been subscribed to erect a suitable memorial to the 36th (Ulster) Division.

Craigavon House is now the registered office of the Somme Association who are responsible for the care and upkeep of both the Ulster Tower and Thiepval Wood.