Webmatters : The Ulster Tower: The Trenches in Thiepval Wood 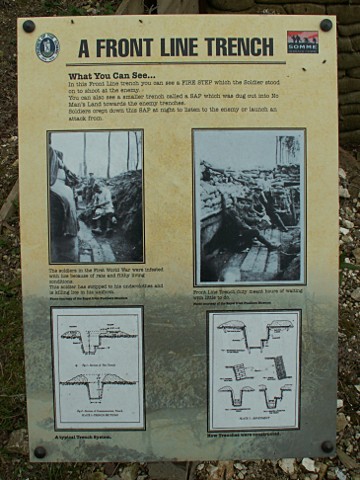 Thiepval Wood is hallowed ground for many people from Ireland. Although it is now owned by the Somme Association, the wood belongs to the men who still lie beneath its soil.

A glance at the panels on the Thiepval Memorial to the Missing reminds us that hundreds of the men who started their last day here in this wood would never be found.

Rather like Delville Wood on the opposite side of the battlefield Thiepval Wood is a cemetery whose headstones are the trees.

It should be remembered that munitions (including live gas cylinders) are still being found. Even when accompanied by Tower Staff — never touch anything you see.

Visits can only be organised by contacting the staff at the Tower.

Remember that they are closed Monday. 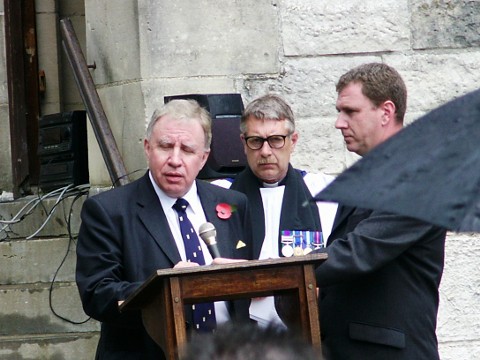 In 2003 the Secretary of State for Northern Ireland, Paul Murphy announced whilst attending the Somme Memorial Service that the Government had offered the Somme Association a grant of £400,000 to aid their purchase of Thiepval Wood.

If you look at a modern map you will see that it is marked as the Bois d’Authuille after the nearby village, but for the Irish it will remain forever as Thiepval Wood.

The people of Northern Ireland have a strong emotional attachment to the Somme and it was important when Thiepval Wood came on the open market that the new owners would respect its historical legacy.

The Association’s aim is to keep the wood as a memorial to the memories of the fallen. In the future, I know the Association plans to open part of the wood to the public, which will add to the experience of people visiting the Somme.

Excavations of the trenches are still continuing but it is not the intention to expose everything.

The wood has in fact remained almost untouched since the war apart from being used as a hunting area (deer and wild boar) and for a certain amount of lumber work which is required under French forestry laws.

When the Ulster Division moved into the wood in 1916 they found a mixture of old French trenches as well as those dug by the Scottish Regiments who had been the previous occupants.

It was quite customary for units to name their trenches after local landmarks and places back home and this is why many of the trenches carry Scottish names. Whilst many an Orangeman’s heart may skip a beat on learning that there is a Paisley Avenue it is in fact the town that is being referred to !

There are numerous information panels along the walkways (to which you must adhere) and one of these shows the trench works carried out by the 16th Royal Irish Rifles (Pioneer) Battalion.

Each division had a Pioneer Battalion which was often made up of craftsmen from civilian life. Men who knew how to dig and build. They were also expected to be soldiers and their presence certainly didn’t stop the Poor Bloody Infantry from having to give a hand with the manual work. 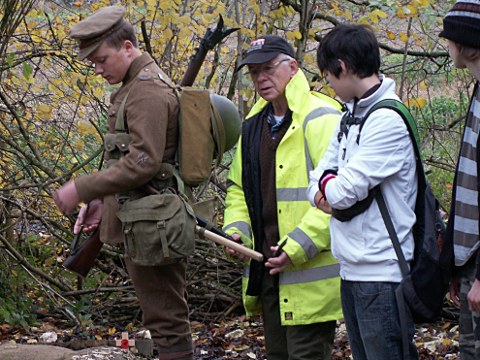 Immediately to the left of the entrance is a section of Whitchurch Street which was occupied by men of the Royal Inniskilling Regiment on the 1st July 1916.

Leading out in front of them a sap had been dug for gas cylinders. At this stage of the war we did not have the ability to deliver gas by shell and the propulsion of gas towards the enemy depended on the wind. Enough to blow it away from your own trenches but not so strong that it would dissipate the gas.

In the end the gas was not used and the cylinders along the front of Thiepval Wood were covered over. At least two got left behind and were found during excavations in 2007.

A little further into the wood and you can see a trench mortar position. Firing a large ball of a shell they looked like toffee apples and were almost as dangerous to the launch crew as to those at the receiving end.

You can see one in the small museum at the Ulster Tower.

The base plate would be placed in a prepared position open to the sky. The team would fit the mortar apparatus and prepare the device for firing using a blank rifle cartridge.

The men would then take shelter around the corner from the mortar which would be fired by means of a lanyard attached to the trigger.

With their distinctive sound and shell it was never long before the Germans located the firing point and called down artillery onto it.

Trench Mortar crews never really endeared themselves to the infantry in the nearby trenches, as they would fire a couple of rounds and then gather their kit and move to the next prepared location.

The infantry would of course receive the wrath of the counter barrage. 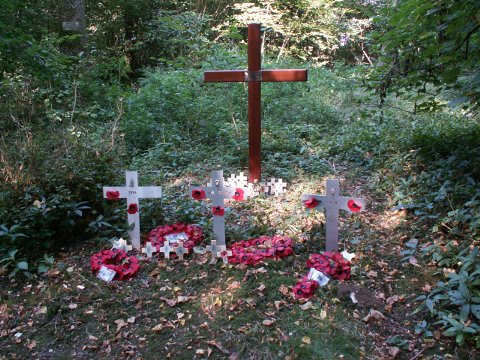 Not far away a number of crosses can be seen planted amongst the trees.

As already stated, many of those whose names appear on the columns of the Thiepval Memorial lie somewhere here in the wood. One of those missing soldiers is Private William McFadzean VC who was serving in C Company, 14th Bn Royal Irish Rifles.

Billy McFadzean was born at Lurgan Co Armagh on 9th October 1895 although the family hailed from Cregagh, Belfast.

The twenty year old was a tall, well built man who had played rugby for Collegians RFC prior to the war. His build had made him the perfect material for a company bomber. These were the men who would be in the front of an attack carrying sacks of grenades. The grenades were called bombs by the soldiers and were the most efficient way of clearing enemy dugouts or fighting along trenches.

Before going into battle it would be customary to hand out grenades to other soldiers to carry forward. That way if a bomber ran out he only had to ask the nearest soldier for his two.

It was here in Thiepval Wood whilst distributing grenades that Billy McFadzean, 20 years old, would win the first Victoria Cross of the Battle of the Somme – before the attack had even commenced.

For most conspicuous bravery. While in a concentration trench and opening a box of bombs for distribution prior to an attack, the box slipped down into the trench, which was crowded with men, and two of the safety pins fell out.

Private McFadzean, instantly realising the danger to his comrades, with heroic courage threw himself on the top of the bombs. The bombs exploded blowing him to pieces, but only one other man was injured. He well knew his danger, being himself a bomber, but without a moment’s hesitation he gave his life for his comrades

His body was never found and his name can be found on Panel 15a of the Thiepval Memorial. He was posthumously awarded the Victoria Cross which was handed to his father by King George V at a ceremony in Buckingham Palace. 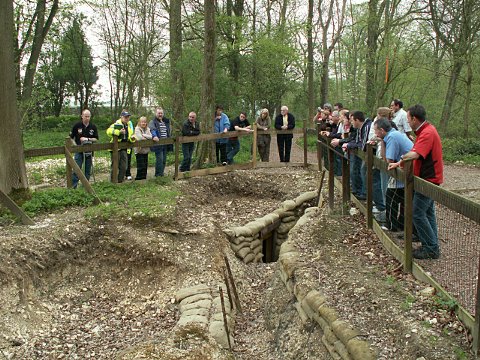 Many of the dugouts that can be seen were dug by French troops who arrived in the area in late 1914. Some were abandoned others were used by the newly arrived British.

The general complaint against the French was the standard of sanitary hygiene. However, many of their shelters withstood the test of time and bombardment and continued to be used.

Different methods of creating shelters are explained and can be seen on the tour.

Amongst the trees shell craters abound and the communications trenches can be seen running off here and there towards the rear.

Within the wood over twenty kilometres of trenches were dug to hold and maintain the front line.

Whilst the wood will be forever associated with the Ulster Division, two noted writers also served a moment here.

The poet Edmund Blunden, served with the 11th Bn Royal Sussex Regiment and composed his poem : Thiepval Wood, whilst surrounded by the shattered remains of its trees.

Ember-black the gibbet trees like bones or thorns protrude

In September 1916 as the British Army was finally prising the Germans out of their strongholds on the Schwaben Redoubt the 11th Bn Lancashire Fusiliers arrived in the wood along with their Communications Officer a young Lieutenant called JRR Tolkien. 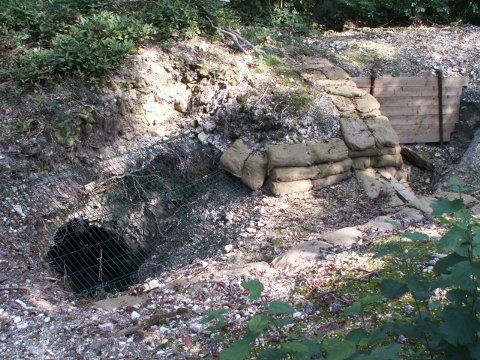 A work in progress

The excavations are continuing as and when finances allow. The Somme Association is a charity so if you have found the tour interesting do not forget to place a small contribution (Or a large one if you wish ! ) in the collecting box.
If others had not done so before you, you would not have had the chance to visit today.

A rough outline of some of the trench systems in 1916